Are you fond of tasting delicious dishes of various cuisines? Then you’ll surely be satisfied with the Armenian dishes. If you are familiar with some Armenian kitchen recipes you may have some opinion about the Armenian foods.

However, if you have ever visited Armenia you have probably eaten Armenian barbeque and Dolma or other important dishes of Armenian cuisine. Of course, the Armenian desserts are an inevitable component of the Armenian table. Yet, this isn’t all. There are many more dishes included in the Armenian cuisine that may arouse your interest and increase your appetite. One of such dishes is the Armenian Khash.

Khash is one of the most famous dishes in Armenian cuisine. The name “Khash” comes from the Armenian word “khashel” (խաշել) which means “to boil”. Khash is a dish of boiled parts of cows or sheep. These parts include the head, feet, and stomach. 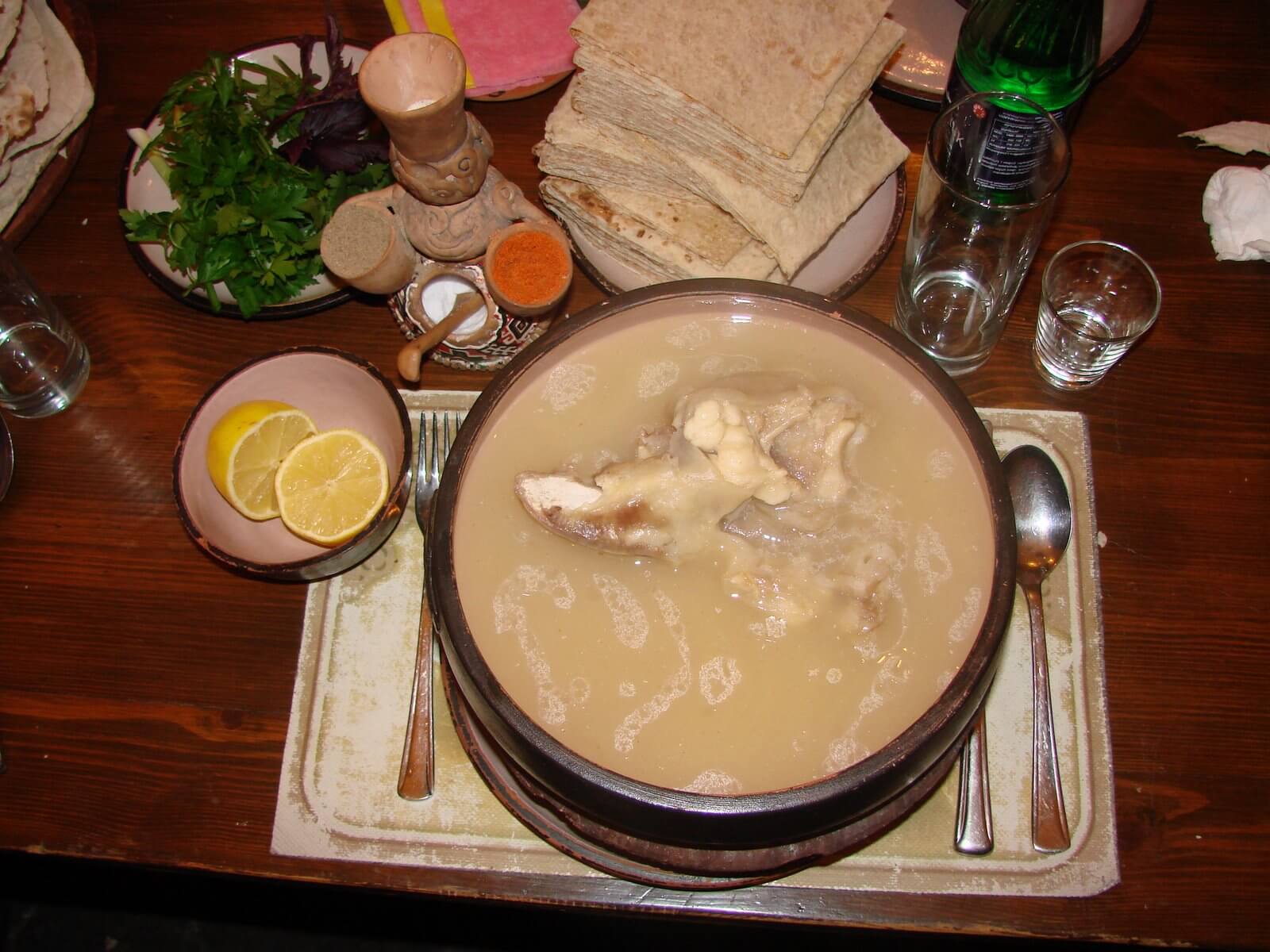 The Preparation of Khash

Do you like cooking? If yes then you may like to have some experience of making Khash. The preparation of khash is a long, interesting, and maybe tiring process.

The feet and other parts of the animals are depilated, cleaned, and kept in the cold water. The purpose is to get rid of the bad smell. Besides, keeping the meat in cold water for a long time shortens the boiling period. After keeping them in the cold water all night long, the items are to be boiled in water. 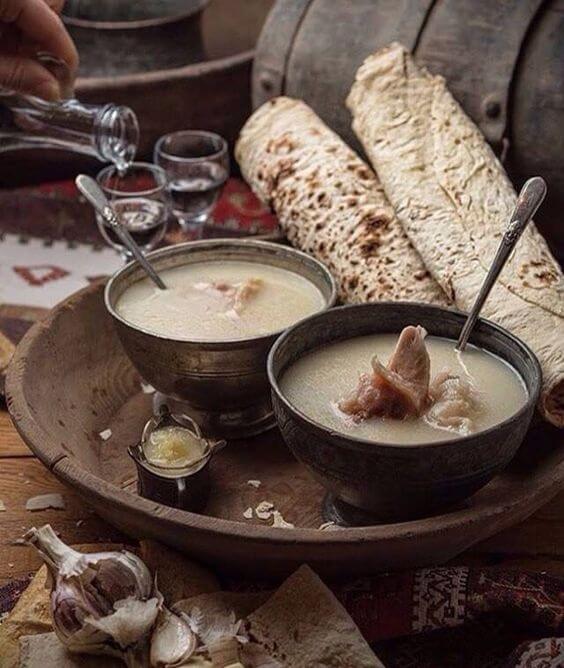 The dish should be boiled until the water becomes thick like a bouillion and the meat is parted from the bones. The interesting thing is that you don’t add any spices and even salt in this dish in the process of preparation.

Some ingredients of the khash soup you may like to serve as well are lavash, garlic, onion, salt, pepper, vinegar, etc. You shouldn’t add them while cooking but you should serve so that people add according to their taste.

How To Eat Khash

If you haven’t tasted khash yet, you may feel uncomfortable about how to help yourself. Here you’ll find some “rules” related to eating khash because they say you require some skills to eat khash.

The first and most important rule is that khash is eaten in cold weather. Do you guess the secret? Khash is a warm and relaxing dish, and it is served hot. Armenians say that you should eat khash only in those months which contain the letter “r” in their names. As a result, we exclude the months of May, June, July, August.

The second principle is that khash is considered to be breakfast. People prefer to eat khash in the morning because it’s a heavy meal. Yet, traditionally Armenians eat khash on weekends or on holidays when they don’t have to work later. So, it’s considered to be a festive dish. 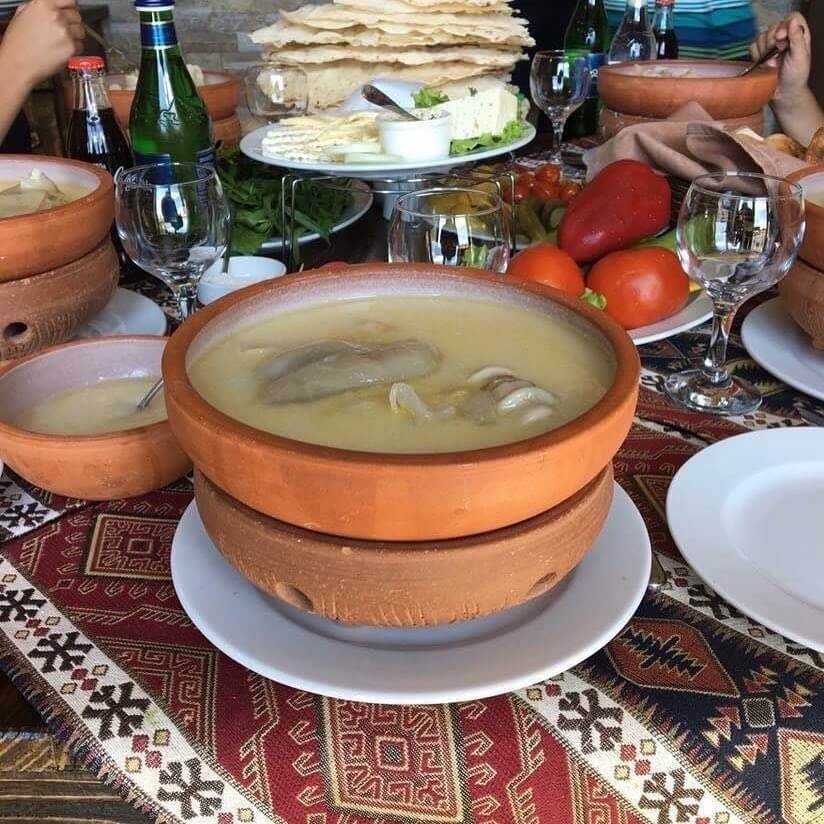 The inevitable ingredients of khash for Armenians are lavash and vodka. The lavash eaten with khash is dried in advance so that you can crumb it. Your first step is to add salt and garlic to the soup according to your taste.

Then you take the feet out of the soup and place it in a separate plate and crumb the dried lavash into your soup until it becomes like a sponge. Armenians don’t use spoons to eat khash. They make you believe that the dish is tastier when you eat with your own hands.

During the eating process Armenians drink vodka because khash is a festive dish and it has to be accompanied by alcohol. Around the table, you may hear different stories, legend, and various interesting talks. However, you are welcome to take part in these talks. The foreign opinion is always appreciated by Armenians.

Where To Try Khash

You may taste khash in Yerevan and all over in Armenia. There are many restaurants in the capital and also in various regions where they serve very tasty khash. Some of these restaurants are “Pandok Yerevan”, “Noyan Tun”, “Hin Zangezur Tavern”, “Ojax”, and many other restaurants you may arrive. 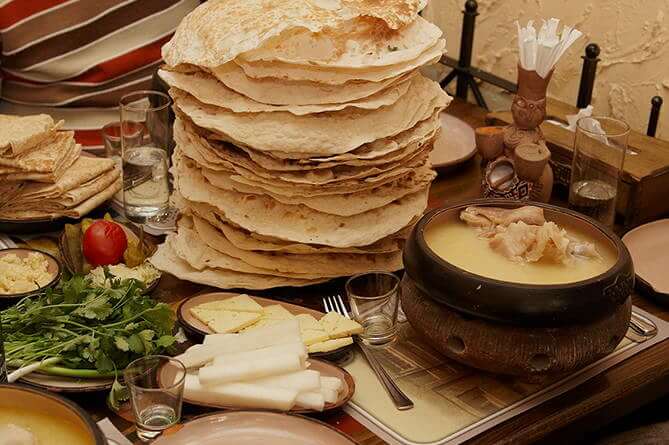 Another recommended choice is to try khash at home. Armenians are hospitable people so they will be glad to share a khash table with you. However, make sure you are ready to drink Armenian homemade vodka.

I think you have already increased your appetite to try a hot dish of khash. This is like a leisure dish because you eat and have a rest all day long. Usually, Armenians eat khash with a group of friends so that they take more of the time.

You are also welcome to try khash in Armenia. And do not forget to express your opinion about this royal dish.