Vօdka is an alcoholic drink which is originated in Eastern Europe. In Russian, the word means "вода - water". The name of the drink was first mentioned at the end of the 9th century. Originally, in the Middle Ages, it was used in medicine, also us an ingredient of producing gunpowder.

Already in the 14th-century Vodka was a national drink of Russia, then in Poland and Finland. There is no exact proof about the homeland of this drink so it has a lot of stories legends and myths about the origin. Some claim that the founder was Persian doctor Ar Razi and he made the first Vodka still in the 9th century. Other claims that the founder was the famous Russian Chemist Dmitriy Mendeleev.

This is an alcoholic drink composed of water and ethanol distilled from fermented grains or potatoes, sometimes with different flavors. Though this drink doesn't have Armenian origin, it is a very popular drink in Armenia. Vodka is a widely used beverage here, even traditional Armenian barbecue is being served with oghi as we call it.

In Armenia, we produce a vodka called "Tti Oghi" meaning a vodka from mulberry. The main vodka-producing regions are Artsakh and Goris. TTI Oghi is a hard drink because the alcohol contains 40 -80 % which also has healing properties. 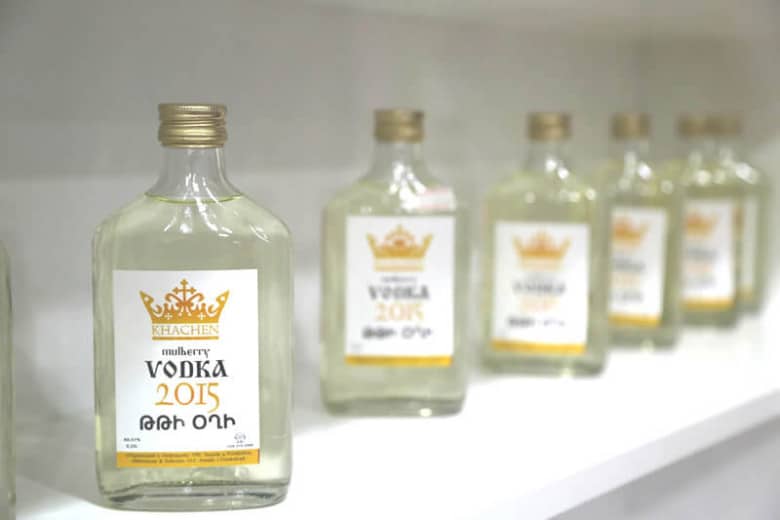 The main ingredients are white and black mulberries. The berries are being picked usually in July. Traditionally, the oghi is being made in jars. We even make unique Vodka which is made of the apricot, peach, apple, and cornel.

We also have a unique festival dedicated to Oghi which takes place in Goris (Syunik Region). The participants are from Meghri, Kapan, Sisian and other parts of Armenia and Nagorno Karabakh. During the festival, all the participants present their Tti Oghi, also vodkas from different fruits and of course, with homemade goods, and dishes, etc.