If you visit a country the first thing you think about is how to visit places. If you make plans connected to Armenia, you have a wide variety of choice.

Metro is an industrial and economic value and not every city can afford to have it. Yerevan is a lucky city in this regard. Besides the public transport and taxies, there is metro which is one of the symbols of Yerevan.

The Yerevan metro was opened on March 7th, 1981. It was the eighth underground system in the Soviet Union. Since then the Yerevan metro system has never delayed its service even during the war. The Yerevan Metro was named after Karen Demirchyan. It has one line of 13.4 km length and operates 10 stations. 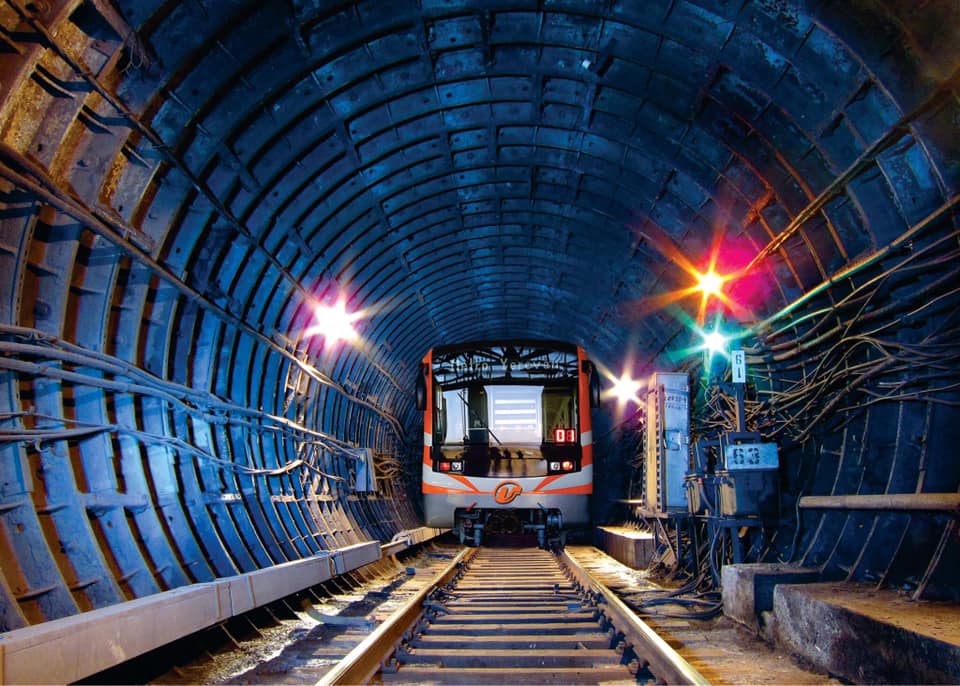 We may call it the subway Armenia because metro Yerevan is the only Armenian tube. No other city or town in Armenia has a metro system. The Karen Demirchyan Yerevan Subway works from 7 AM until 11 PM. The frequency of the trains is about 5 minutes during the busy hours and about 10 minutes in general.

So, we may say that metro Armenia is a rapid transit system which serves the capital. Metro Armenia is owned by the Armenian government and operated by the Karen Demirchyan Yerevan Subway CJSC of the Ministry of Transport And Communication in Armenia.

How To Use Yerevan Metro

Using Yerevan metro is very comfortable and easy. When you enter the station the first thing you should do is to buy a ticket. The Yerevan metro tickets are round orange plastics like coins that cost 100 AMD. 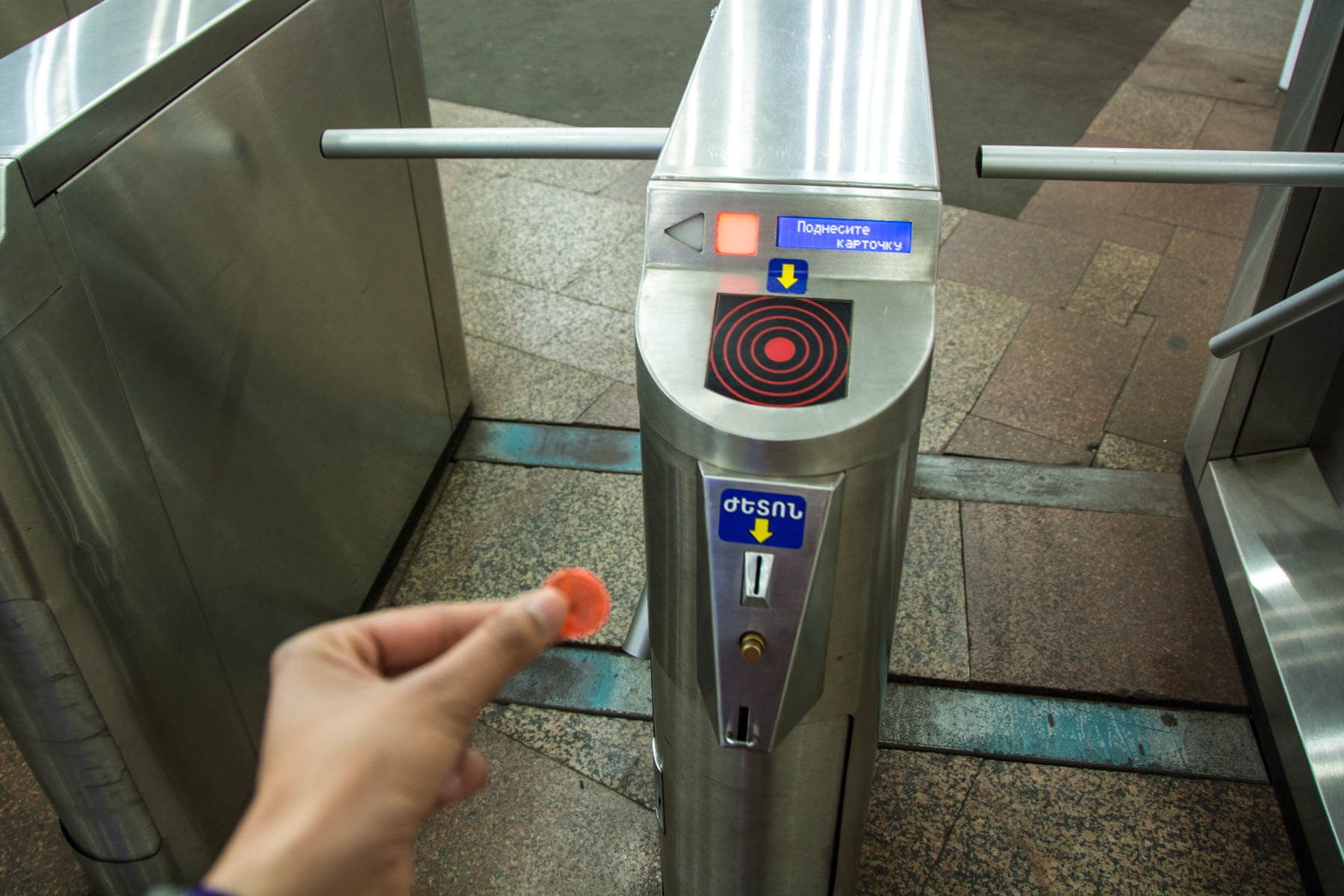 Once you have already bought a Yerevan metro coin you have access to the metro. The escalator leads you down to a large underground station where you should wait for the train. Make sure you take the train to arrive at your right destination. You’ll find the names of the stations the train is directed to. However, you should have some information about the location of the stations in order to get the right direction.

As I have already mentioned, the Yerevan Metro has 10 stations, 7 of which are underground. It scratches from Barekamutyun Square to Charback. Let’s familiarize with the Yerevan metro stations:

The Barekamutyun station is situated in the north part of the city in the Barekamutyun square. The name “Barekamutyun” is the Armenian equivalent of the word “neighborhood”. This is a highly populated part of Yerevan between Atchabniak and Arabkir. 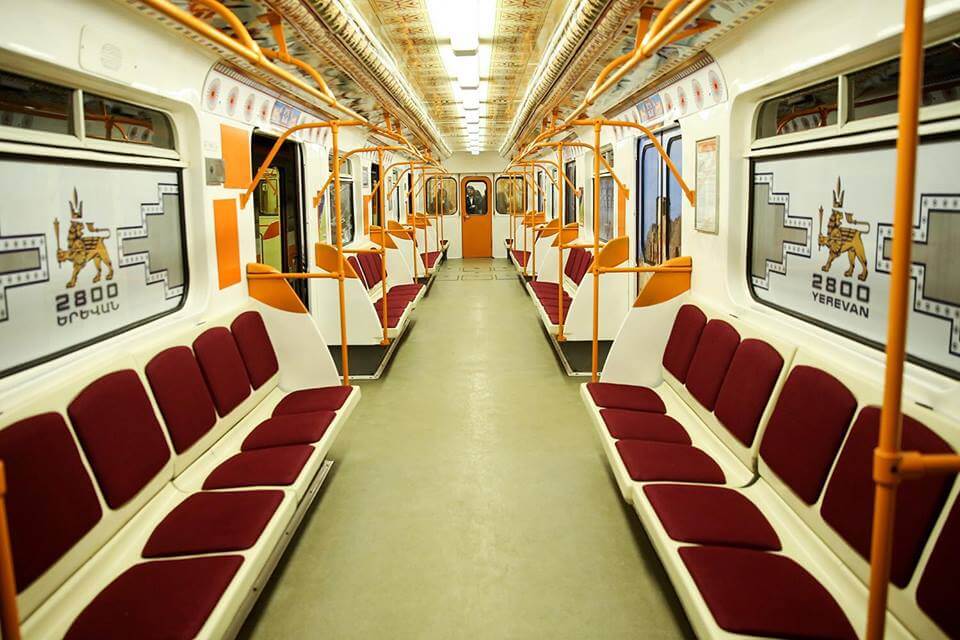 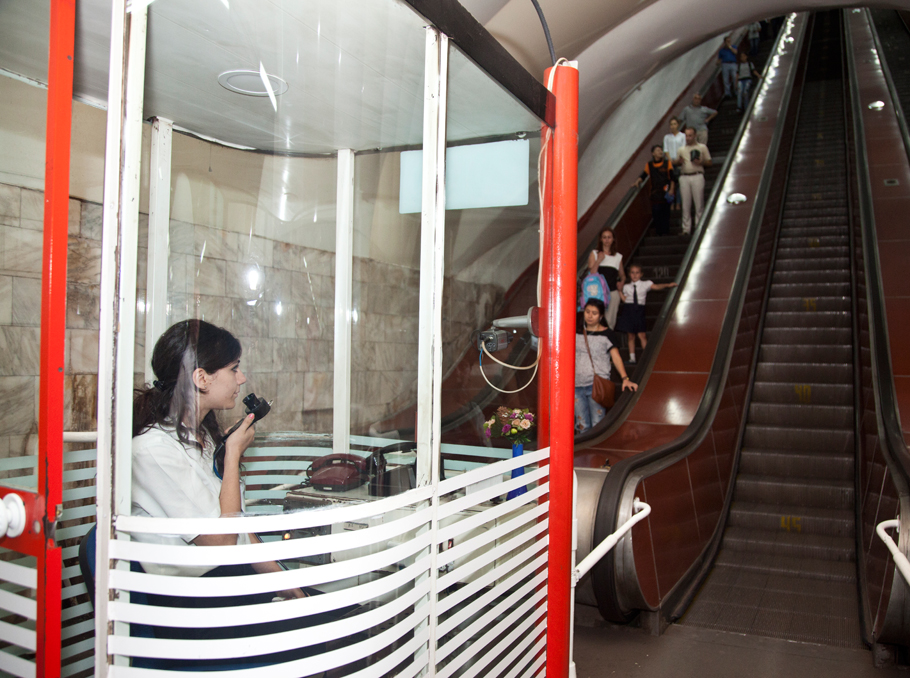 Two underground passages from the station lead you to the Marshal Baghramyan Avenue and to the Lovers’ Park. In a few steps up to Baghramyan Avenue, The American University of Armenia is situated.

Yeritasardakan Station which is located in Isahakyan street gathers the greatest number of passengers. The reason is obvious: it lies in the territory of educational centers. Leaving the underground you’ll meet the statue of Avetik Isahakyan - the great Armenian poet.

The word “Yeritasardakan” is translated from Armenian as “Young”. Maybe because youngsters are the majority of the passengers of this station.

Do you know what station takes you to Republic Square? It is the Hanrapetutyan Hraparak that means “The Republic Square”. The station was originally called Lenin Square. There is a wide station hall decorated with architectural pieces and a fountain in the middle of the hall. 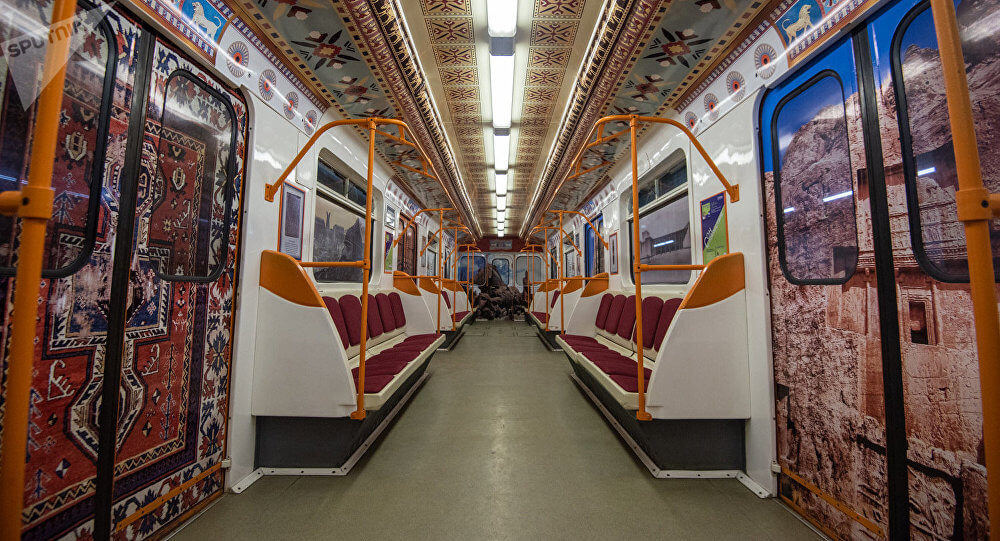 The passages lead you to the Nalbandyan street, and to a little park. From the both sides you may easily go to Republic Square.

Zoravor Andranik station is located in an overcrowded part of the city. The name means “Andranik The Commander”. It was named after the Armenian commander Andranik Ozanian whose statue is placed near the station.

Leaving the station you appear in the crossroad of Tigran Mets and Khanjyan streets and Arshakunyats avenue. On the one side of the crossroad, you may find one of the large shopping centers in Yerevan - Rossia mall.

On the next side, the Armenian Pedagogical University after Khachatur Abovyan rises, and on the front side of the street, you may see his statue. On the other side, the Grigor Lusavorich church is situated. Near the church, there is an entertainment place for children called “Lunapark”. 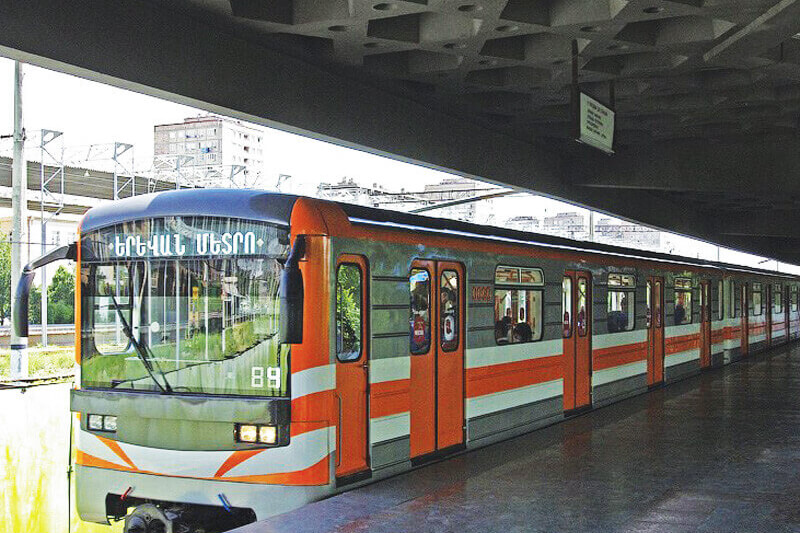 This is one of the three ground stations which was named after the hero Davit from the Armenian epos. In front of the station, you’ll meet his statue (sculptor: Yervand Kochar).

Gortsaranayin is the second ground station. Its name is translated from Armenian as “Factorial”. The name was given due to its location. The statue lies in an industrial district. There are many factories around.

The Shengavit station serves the population in the Shengavit district. It is situated near the Artur Karapetyan Park. This is the only station that leads to two different stations: Charbakh and Garegin Nzhdeh Hraparak. 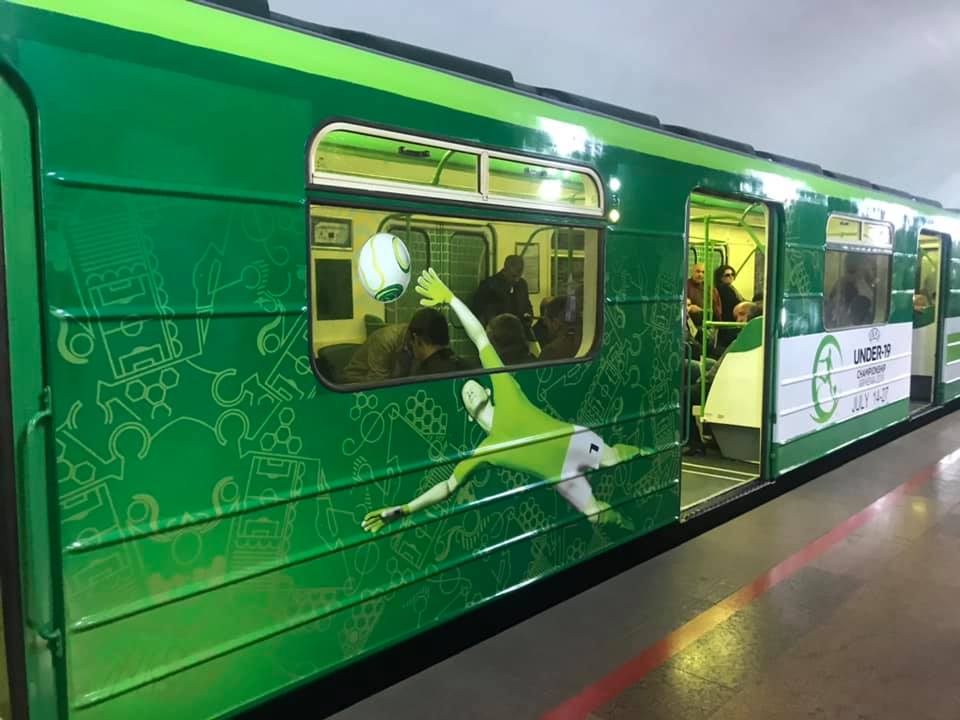 Charbakh is the third ground station. As the Charbakh station branches off from the Shengavit station away from the Garegin Nzhdeh Square it serves as a transit service from Shengavit.

Now you are somehow aware of the Yerevan subway line structure. Have a look at the Yerevan metro map to imagine the locations of the stations and the directions more clearly. 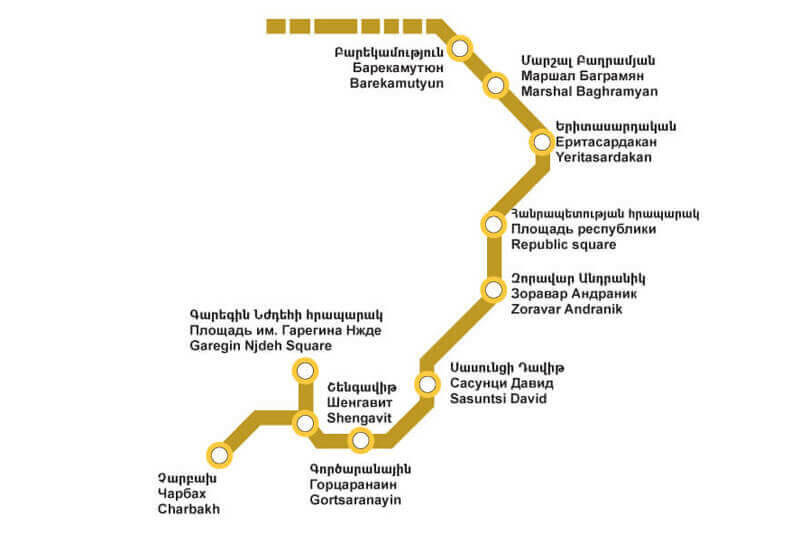 4 Tips for a Successful Hunting Vacation