The Wings of Tatev is the world’s longest non-stop double-track cable car at 5.7km and is located in Armenia! While Armenia is full of ancient churches and fortresses, it is also home to this popular, modern-day construction miracle. The cable car opened in 2010 and not only holds the record for the longest non-stop double-track cable car but also for the fastest construction time (10 months).

It connects the village of Halidzor, Armenia with the 9th-century Tatev Monastery and tickets are 5000AMD ($ 10.58) for a one-way journey and 7000AMD ($14.81) for a round-trip. The cable car capacity is for 30 passengers and operates from 10 am to 6 pm throughout the year (9 am to 8 pm in summer) where the 10-15 minute ride suspends passengers above the Vorotan Gorge with breathtaking views of the Tatev region and sites one can travel to.

Hiking is a popular option in Tatev, and along with a cable car ride, visitors can arrange for guided hiking tours to the Tatev Village, Great Hermitage Monastery, Devil’s Bridge, and Old Halidzor Village. One can ride the cable car and be amazed by the 320m birds-eye-view of these breathtaking places and then venture on foot to have a closer look. The Great Hermitage Monastery dates back to the early 17th century but was later abandoned in the wake of the mid-7th-century earthquake in the region.

Now, the structures still stand and are connected by a steep switchback path to the main Tatev monastic complex which was founded in the 9th century. Devil’s Bridge is quite the feat of nature, a natural bridge over which a man-made road crosses. At the base of the bridge is a natural warm water spring, formed by the Vorotan River, and is lined by beautifully colored stalactites.

Then, Old Halidzor Village, which was gifted to and owned by the monastery from the 10th to 19th centuries, is no longer inhabited but shows the ingenious feats of Armenian construction. The homes are built into the side of the gorge walls, layered so that the roof of each house forms the floor/yard of the home above it! 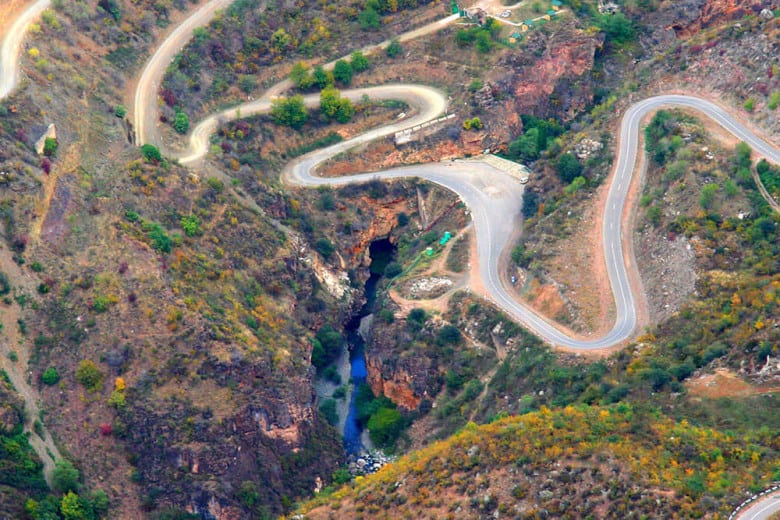 The Tatev Monastery itself is also quite the attraction and the construction of the cable car has reduced the half-hour drive on switchback roads to a third. The church and many buildings in the complex are still functioning today, but even the parts that are no longer used have their own stories.

In the 17th century, an oil mill was built in Tatev and was powered by an ox that walked in a circle, pulling the heavy millstone to press oil from mustard, sesame, and flax seeds. Furthermore, on three sides, the monastic complex features the ruins of fortress walls, and beyond these walls, impossibly steep drops into the gorge below.

During the 12th century Seljuk invasions, these walls and natural landforms provided protection for the people living in the monastery. Unfortunately, it was eventually overrun and plundered, but by the 13th century was rebuilt and once again functioning.

Also nearby, in a view from the cable car, is the Harsnadzor Watchtower, the subject of a gruesome folktale as well as a key strategic outpost in medieval Armenia. Harsnadzor translates to Gorge of the Bride, and its name comes from the following story: a long, long time ago, during the times of Persian invaders in Armenia, there was a bride and groom who were just married and still wearing their wedding clothes. 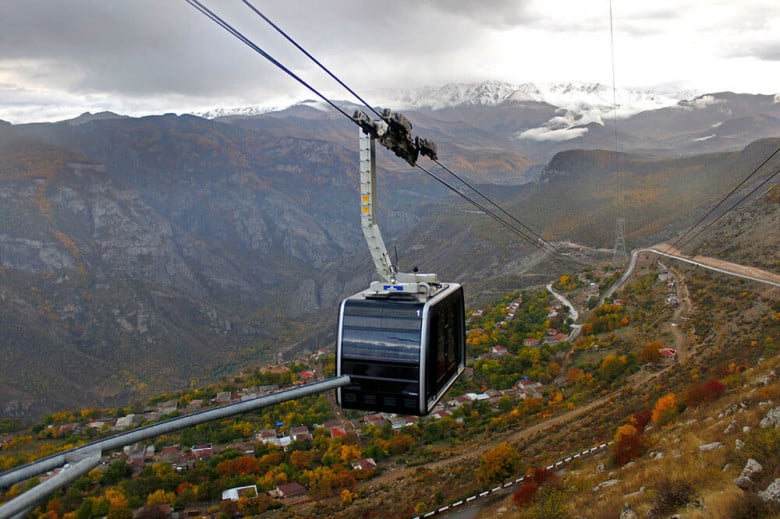 They were on the way to their honeymoon when they were attacked by Persian soldiers who killed the groom. The bride, who would rather die than be captured by the soldiers runs to the cliffside, makes the sign of the cross, and jumps to certain death.

A miracle occurs, and instead of falling, the bride’s dress fills with air and works like a parachute allowing her to land safely in the gorge below where she can escape to freedom...although without her groom. For centuries, the same location was used as the third station in a chain of warning bells constructed in the Zangezur Mountains to warn against enemy attacks.

The guards in the nearby Kordzor would sound their alarm bell, which passed the news to Khot village who sounded their alarm, alerting the Harsnadzor watchtower to ring their bell which could be heard at Tatev Monastery. The main bell in Tatev could be heard across a 50km radius and the entire region would be alerted to the impending invasion. Invading enemies destroyed the chain of bells by destroying the bell in Khot village, but today the Harsnadzor watchtower remains with the chains that once held the warning bell.

For a less historic source of excitement, visitors can also arrange paragliding tours that depart from the nearby Goris airport and travel over the entire Tatev region. In addition, by the summer of 2018, the Wings of Tatev is planning to expand beyond the typical cable car ride. Soon, riders can take a special trip and parachute from the car into the deep gorge!

After so many adventures, visitors will be sure to need food and a place to sleep or at least take a nap! The Wings of Tatev complex includes a restaurant as well as a guest house that is available for rent. There are also many B&Bs that offer various tour packages as well as meals for visitors to the area and can be as low as $15/night.