A trip to any country is incomplete without trying the local cuisine. Armenia has a rich food history to span across more than 1,500 years, with many traditional cooking techniques still influencing the cuisine today. It reflects the history and geography where Armenians have lived.

Meat is a major part of the cuisine. Armenian food is rich with vegetables, greens, and spices too. Armenians also cultivate wheat, rice, peas, beans, walnut, hazelnut, and almonds. This is a list of mouthwatering and delicious Armenian dishes you should definitely try when visiting Armenia.

This is not a typical barbeque, it is made of freshest meat, specially marinated and grilled over a wood fire. Khorovats is one of the special parts of Armenian cuisine. It is hard to imagine any occasion or just a small get together without this. It can be made of pork, beef, lamb or even fish.

Usually, vegetables like eggplants, potatoes, green peppers are grilled with it which also makes a great combination with chicken. It is easy to make and is made in every house, restaurant or even small cafes. Want to try and make it at home?

When you visit Armenia, dolma should surely be on your list of dishes to taste. Dolma is considered to be “the most Armenian dish’’ by many people. You will know the reason after tasting this inimitable Armenian dish that extends far beyond the border of many different countries. 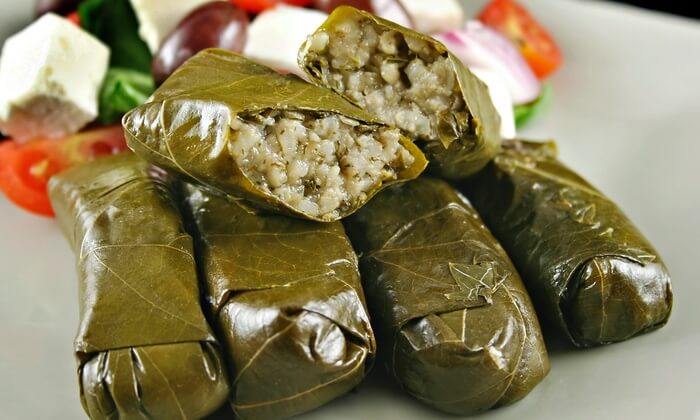 Dolma is made by stuffing minced meat, herbs, rice and spices in a grape leaf. Traditionally, it is wrapped in a grape leaf but people also use cabbage or stuff in green pepper, tomato or eggplant.

Harissa is an Armenian dish from the Ararat Plain. It is a thick porridge made from peeled wheat and fat-rich meat, usually chicken or lamb. It requires a good amount of time, stirring, patience and love. It is still prepared by many Armenians around the world and is also considered the national dish of Armenia. 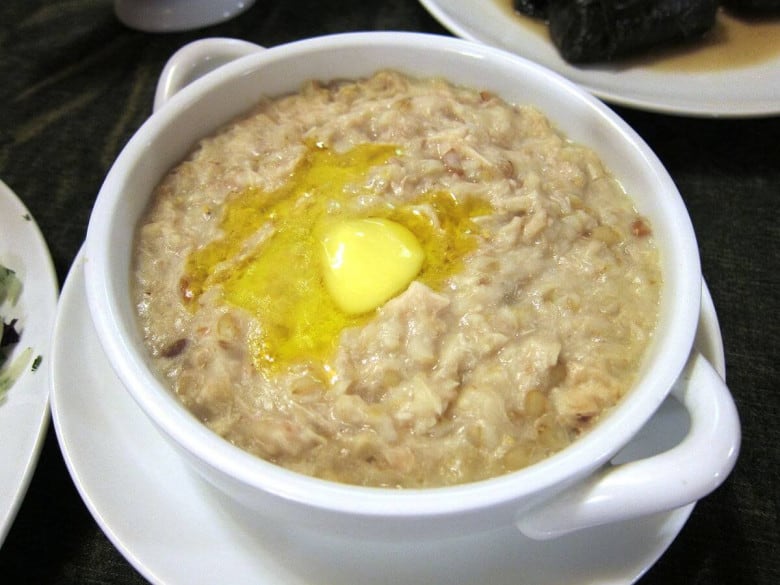 Moreover, we have a special festival dedicated to this dish. The Harissa festival has been celebrated on the third Sunday of September, in Musaler village, near Etchmiadzin since 1983. Every year the locals celebrate this day which is dedicated to the honor of the soldiers of Musaler’s battle.

Spas is a creamy, tart, filling and soup served warm in the winter and chilled during summer months. This soup, sometimes called is a classic Armenian cuisine. It’s made with yogurt and wheat grain and seasoned with mint or cilantro. 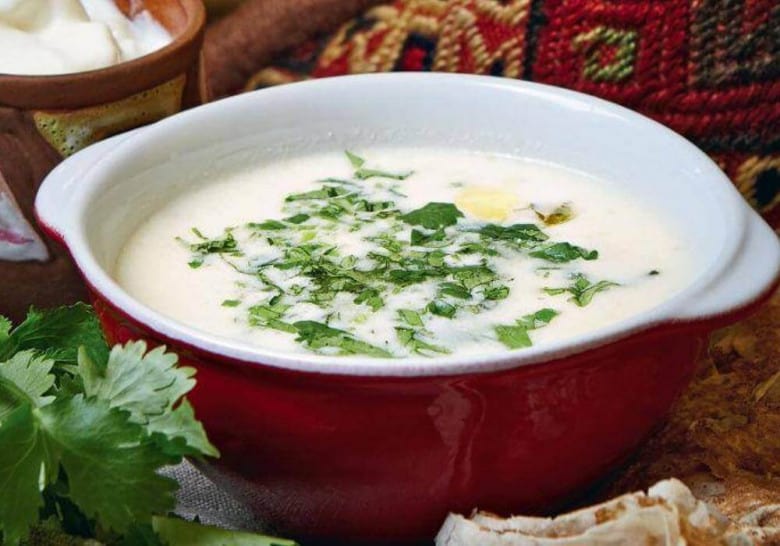 In a mountainous country with harsh winters, most rural homes keep their cupboards well-stocked with dried buttermilk and grains.

A dish called Tjvjik, which is a fried beef liver with a good amount of onions, spiced and seasoned with salt and pepper. This is one of those love or hate dishes, not everyone enjoys the specific smell and taste of cooking beef liver. 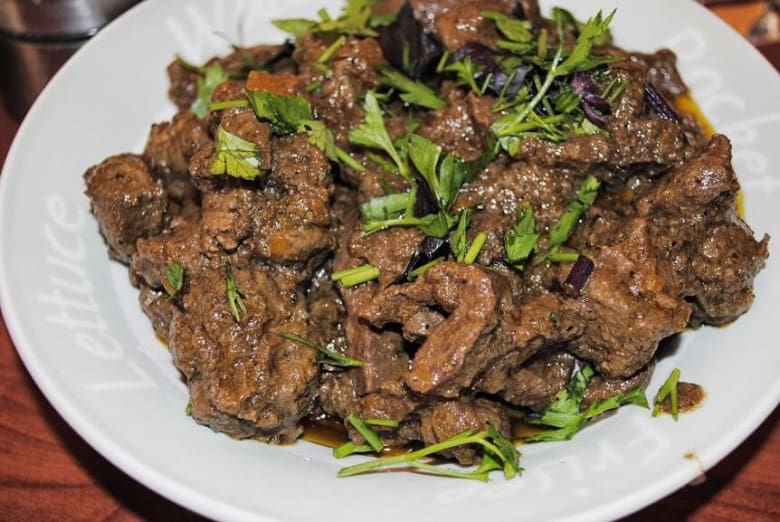 Traditionally Tjvjik is made quite simple: they’d fry a good amount of onions, add the sliced meat, salt, and pepper, cook until done. 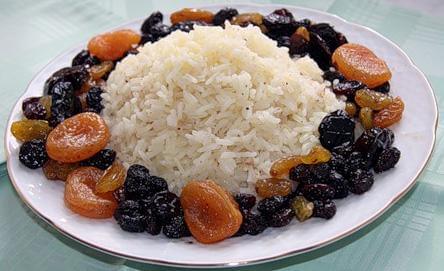 An absolute “must dish” for the Armenian Easter table. Probably one of everyone’s most favorite meals on that special day. This delicious rice with raisins can be made a few different ways, depending on your taste preference. A variety of dried fruits can be added, keeping the raisins as a must. 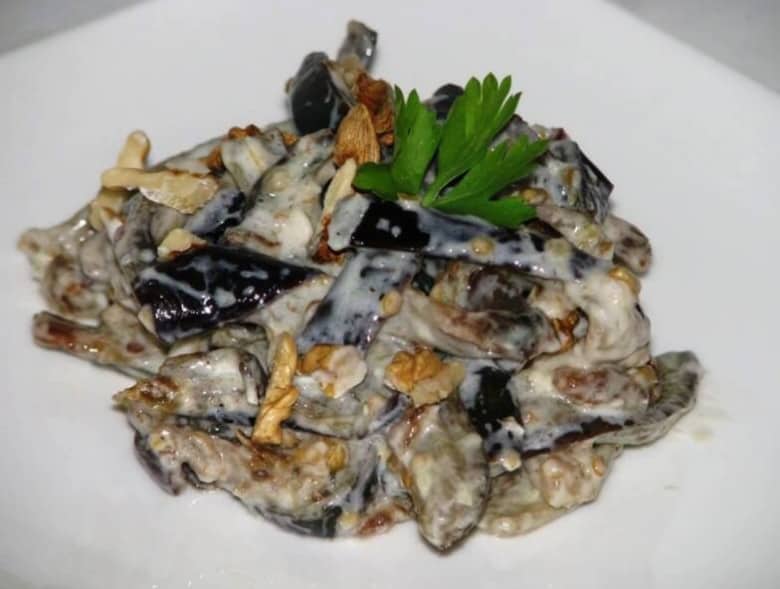 Salads play a big role in Armenian cuisine. Roasted vegetables, cucumbers, rosemary, and olive oil are typical ingredients in Armenian cuisine, but then many countries of the Near East and the Mediterranean may lay claim to succulent, big-flavored salads like this. It’s a beautiful dish, glossy and colorful, and the soft roasted vegetables and crunchy celery make for an interesting texture.

Khash is a dish of boiled cow or sheep’s feet and/or head. It is cooked by boiling bovine shanks for hours until the tendon falls off the bones and the water becomes a thick broth. 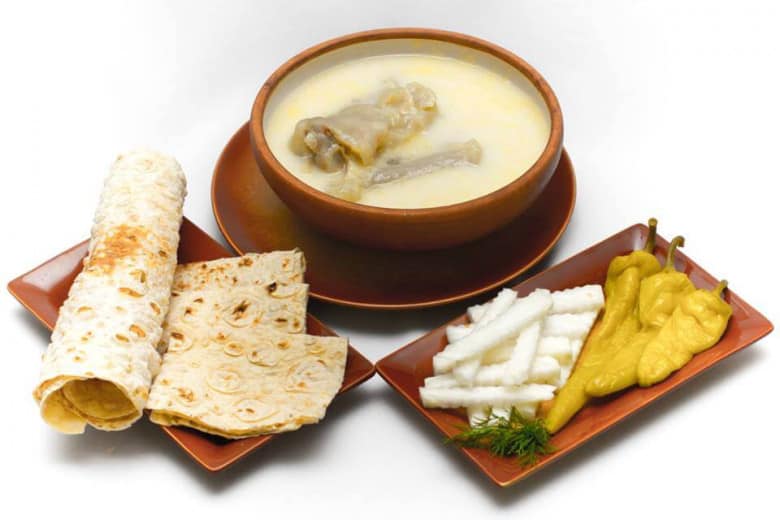 Many times cooked stomach pieces are also added to the dish. There is no salt used while cooking, but it is liberally seasoned with salt and garlic after the dish is served.

Kebabs in Armenia are prepared for ground meat spiced with pepper, parsley, and other herbs, and roasted on skewers, which are known as "shish" in Armenia.

Shish kebab is known as Khorovac in Armenia, while Lule kebab is known simply as "kebab". Like other cultures, kebab is often served during special occasions. Onion is often added to the kebab to enhance the flavor.

Lavash, the one thing most of the dishes are incomplete. Lavash is a must when sitting to have a meal. It is a soft, thin unleavened flatbread made in a tandoor (clay oven). Lavash is made with flour, water, and salt. 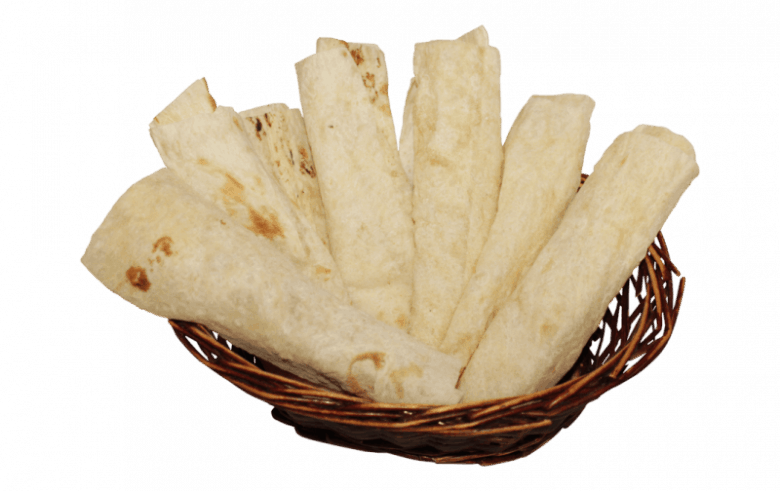 The thickness of the bread varies depending on how thin it was rolled out. Toasted sesame seeds and/or poppy seeds are sometimes sprinkled on before baking. Traditionally the dough is rolled out flat and slapped against the hot walls of a clay oven.