A velvet revolution or revolution without blood. I think it’s difficult to understand this. Why? Because it has never been before. But it happened. It happened in Armenia and now all world talk about us, as a phenomenal nation. Armenia is a brand. It’s fantastic. Isn’t it?

Nikol Pashinyan: the Armenian opposition leader, the man whose name is known by every Armenian and not only. He began this revolution which infected the entire Armenian nation both in Armenia and the Diaspora. The 10-day peaceful rally and the Prime Minister resigned․

What was the Armenian's and Nikol Pashinyan's Demand

The People of the first Christian country had many problems, like corruption, increased rate of poverty, a big oligopoly (with oligarchs of bad behavior), low GDP, an expensive basket of goods, low salaries, and more. Each year lots of families leave their motherland with the hope to find a better life outside of the country. They never had an alternative. After ten years of presidency, Serzh Sargsyan became prime minister, even though in one of his interviews he declared that he will never hold a position again. The people of Armenia who once lost their hope found it again and Nikol Pashinyan, the opposition leader, became a leader of a nation and made Armenians united like never before.

The initiative was called "my step"․ That means Nikol Pashinyan did his step and every Armenian must do their steps. Nikol PAshinyan started the protest, or as Armenians say began his step from Gyumri on March 31, 2018. The goal was to inform the citizens of Armenia about the idea of suspending the third term of Serzh Sargsyan's tenure. They did 306.000 steps and passed 200 km. The last stop was the Freedom Square where gathered thousands of people․ 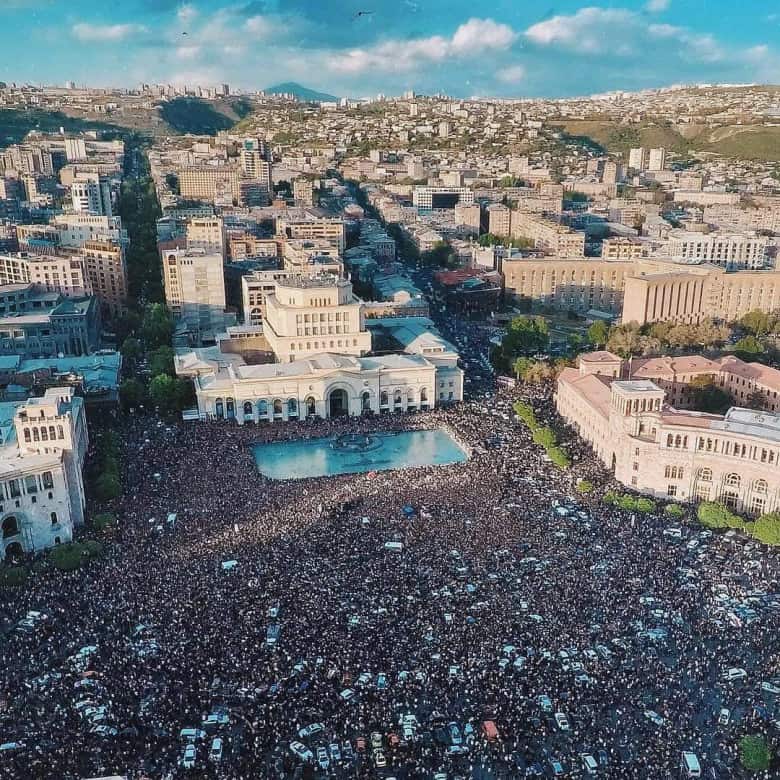 Nikol had one goal - to make a revolution in a peace, without a fight, without blood, and with raised hands․ He urged people to close all the roads in the Republic, to strike. And they did it. On April 23, soldiers, peacekeeping troops, doctors, teachers and many public figures joined of demonstrators․ There were approximately 200-300.000 people at the Republic Square that day.

“My step” has had a hymn. Maybe you won’t understand words, but it isn’t so important. Just listen.

The symbols of velvet revolutions 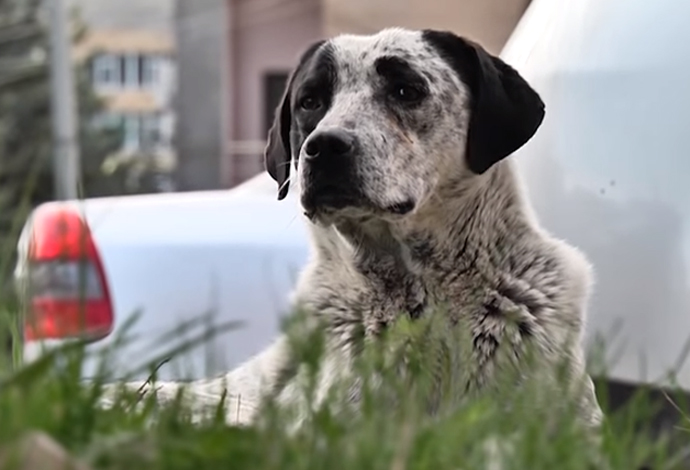 At the beginning of the "my step" a kind dog named Chalo who was renamed Qaylo (arm. "քայլ"-step) joined Nikol's team. He walked as long as the whole team. He was wounded, but was cured and joined a thousand-person rally in the republic's square․ 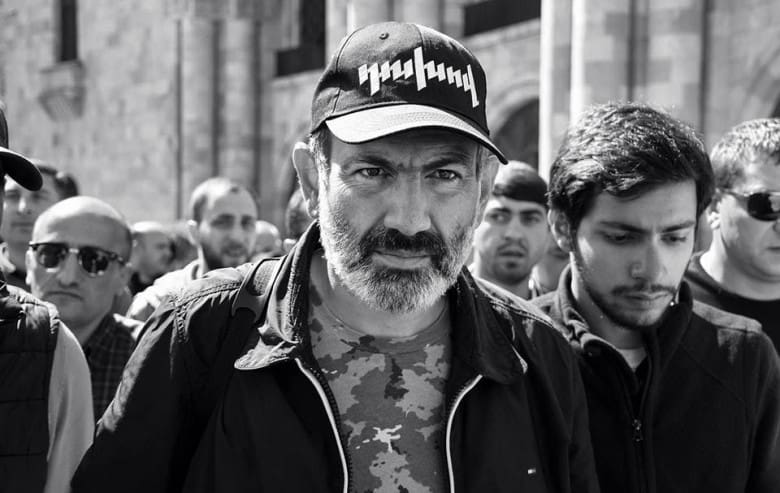 Nikol Pashinyan had a cap on which was written: “#duxov”. This word has no literal translation, but I can say what it means։ “without fear”. Try to write #duxov on Facebook. You’ll understand everything. Now almost every Armenian has a cap or t-shirt with that note. 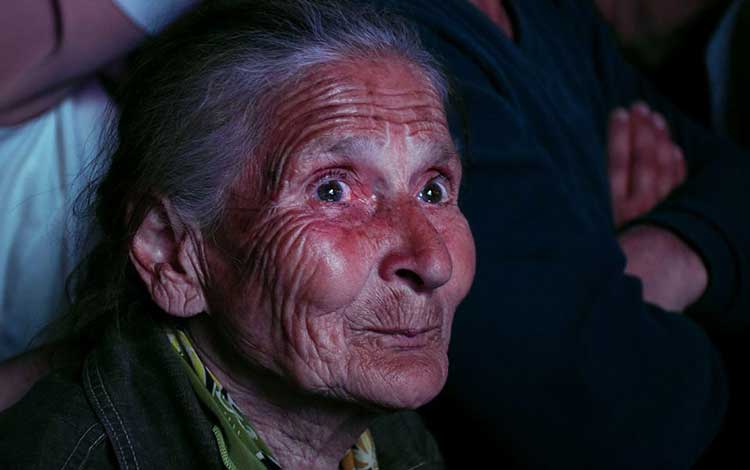 Look at these eyes. How much hope and faith are in there! She waited 12 hours at the Republic square when the parliament was choosing a prime minister. Now every Armenian knows 79 years old Leyla Grandma (Vranuhi Gevorkian). She said: “As is if someone forced me and told me to go there. When I was standing there, I felt healed. I wasn’t tired, hungry and thirsty. Nikol was saying things as if I was telling. I was thinking, Oh My God, who is this man and where did he come that was telling the things that I wanted to say.”

A backpack of Nikol Pashinyan 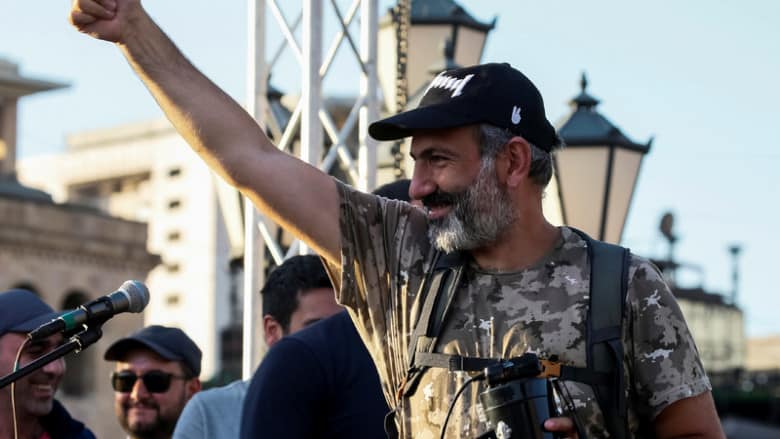 From the first day, the backpack was an inseparable friend of Nikol Pashinyan. Everyone was interested what was in that famous backpack. Pashinyan opened the secret: “The most important things: computer, charging cords...”

A husband of Ira

Imagine, thousands of Armenians watch the live connection and suddenly a man stands in front of a camera and says: “Ira, I would be at home approximately at 1 am”. After that, the video had a thousand shares and facebook was full of funny posts about Ira’s husband. And finally, in one of the protest days, Nikol’s team decided to cheer up the people who were standing there many hours. And they called Ira’s husband to the stage, saying. “Here came husband of Ira” and he told “Ira, I want to say that I’m not going home today “. Now his name is “A husband of Ira”. And from that video, everyone started to be interested in him and his wife. Some companies even sent gifts to them․ 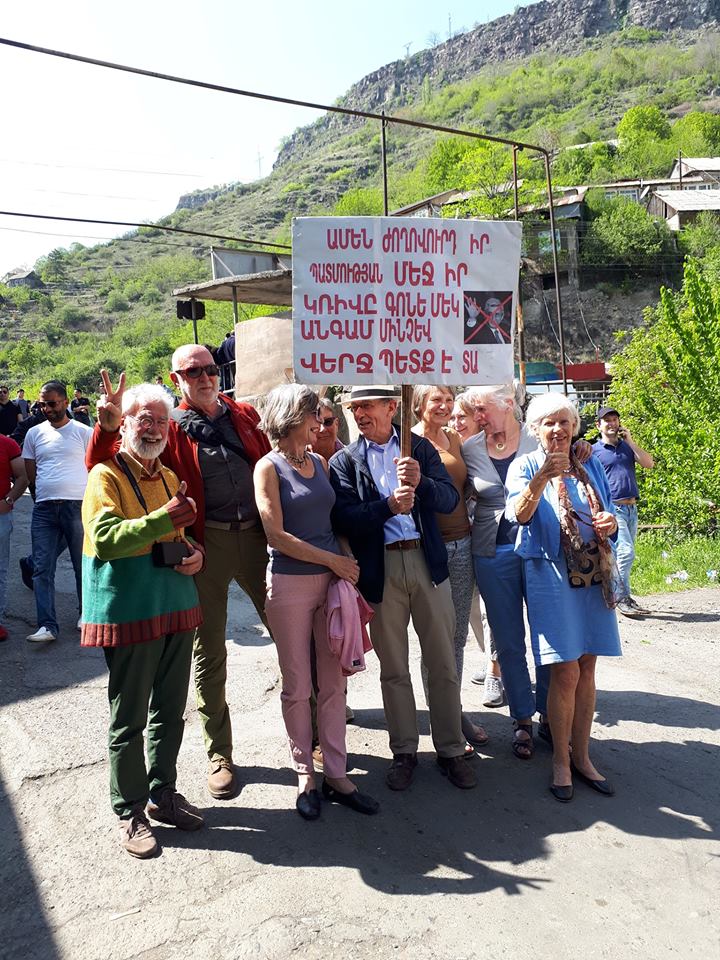 Armenia is a touristic country and now is a perfect time. And what do you think what the tourists were doing? Тhey were struggling with Armenians. Don’t believe? Look!

I’ll say more. So many tourists travel to Armenia to see a “white revolution” on May 8. That day Nikol Pashinyan became a prime minister. Now Armenia is not only the first Christian country but also the first country where was a revolution without blood. We are extremely proud of that fact.

How the Armenians celebrate a victory

A barbecue in the Republic Square, a snow from Aragats mountain, national dances on the streets. 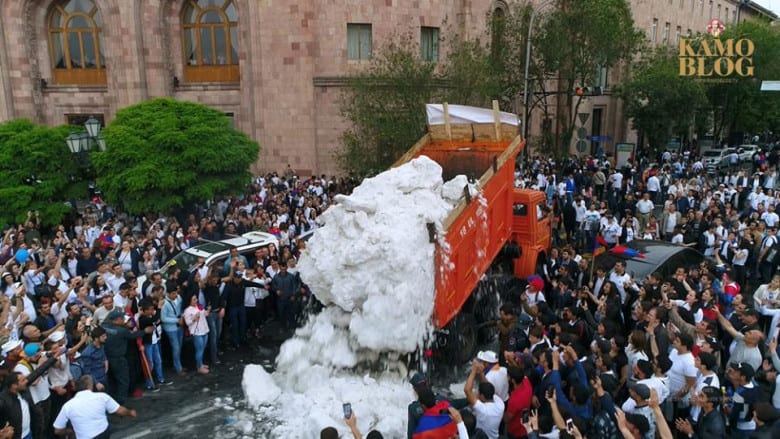 This is how the Armenians celebrate a victory. Everyone was smiling, hugging each other. And if there was a stereotype that Armenians never smile, you will be astonished to see thousands of Armenians laughing and smiling. Everything has changed, people have changed. The first victory was on April 23, when Serzh Sargsyan resigned and the second on May 8 when Nikol Pashinyan was selected as a prime minister. 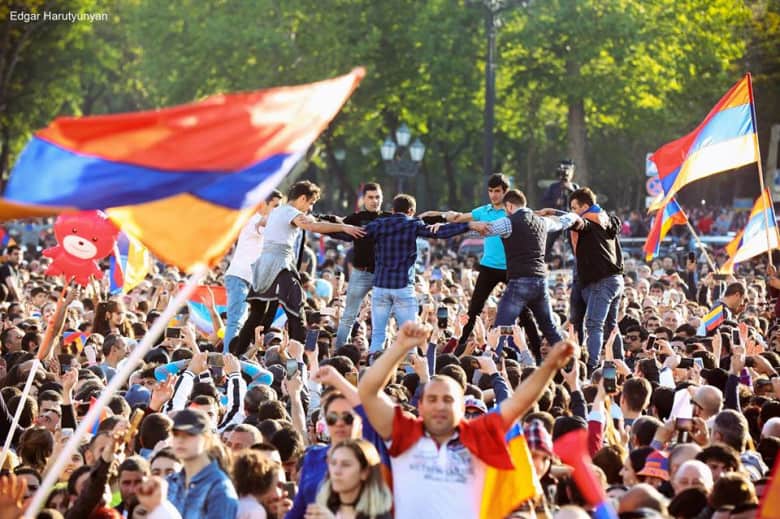 And you know what the most important thing? The thinking of our nation has changed. Now we are different. And now no one thinks about emigration, only immigration․

If you ever think that Armenians were aggressive, with protesting and roads blocking, you now probably changed your mind, because revolution without any aggression happened, and the revolution happened in order to bring peace and equality in our country.

Published May 11, 2018
Article by Shushanik Shahbazyan