There are many ways to commemorate a person or a significant event. One can dedicate a song to someone he/she loves, preserve photos in a scrapbook, or create memorials to honor a famous person or a historical event that happened. When you travel to Armenia, you will see many monuments here. They are essential to us as they are a great reminder of our history. In this article, we are going to tell you about one of the most remarkable memorials of Armenia - "Sardarapat" memorial complex. 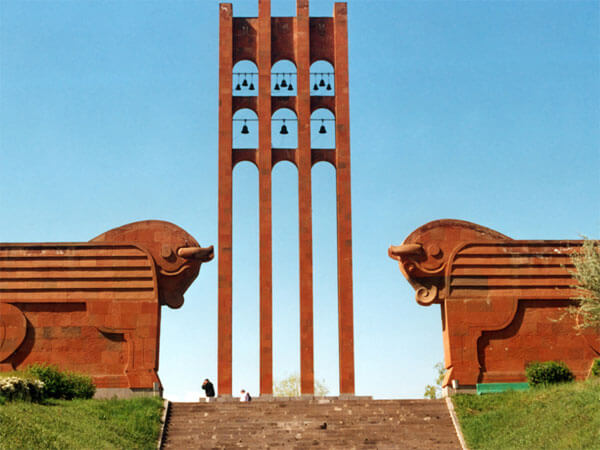 Sardarapat Memorial is located in the village of Araks, in the Armavir province. It was built in 1968 and was created to commemorate the battle of Sardarapat. This magnificent architectural complex proudly presents the glorious victory and also ultimately reveals the importance of the battle. The architecture of the building is Rafael Israelyan.

The sculpting was done by Ara Harutyunyan, Arsham Shahinyan, and Samvel Minasyan. The whole complex is made of red tuff stone. It should be noted that the memorial was built on the exact spot of the battlefield. The construction lasted nearly five years, and it was opened in 1968, regarding the 50th anniversary of Sardarapat Battle. 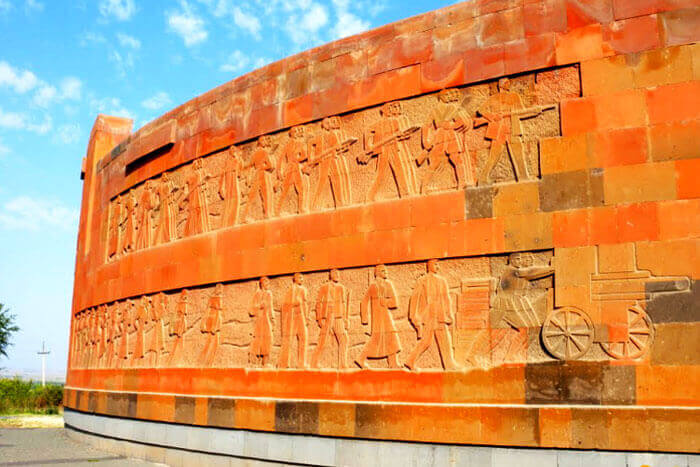 The battle of Sardarapat took place near  Sardarapad (present-day New Armavir) May 21-29, 1918 between Armenian military units and Turkish troops. After the October Revolution, the Turks broke the ceasefire of Yerznka and started the implementation of the destruction of the Armenian nation. On May 21, 1918, the Turkish forces intruded Ararat valley and occupied the village of Sardarapat. Step by step, they were approaching Yerevan, and the future of our nation was in grave danger. 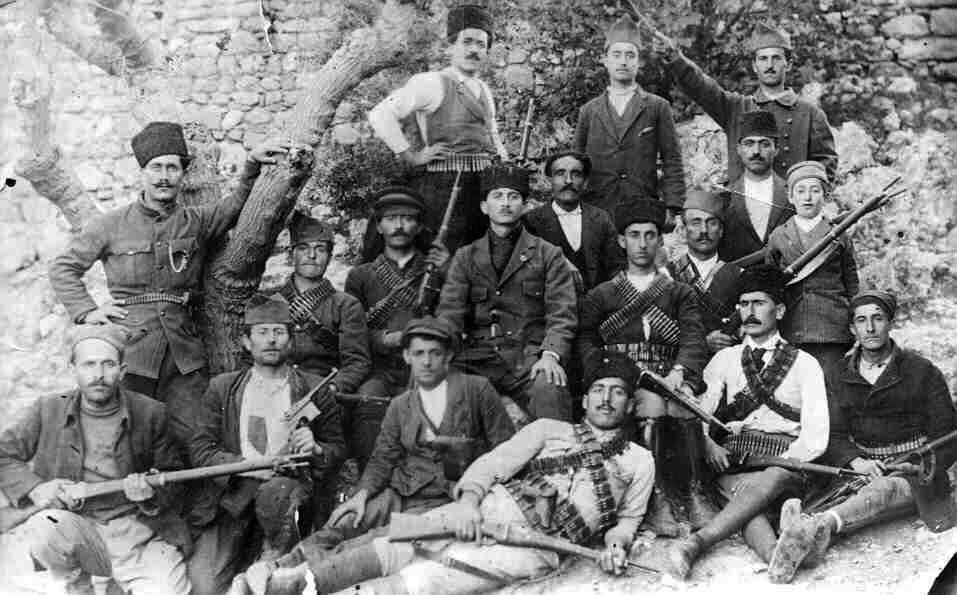 The crucial battle took place on May 22, 1918. The young and old, women and children joined the soldiers and defended the Motherland. The battle ended with the glorious victory of Armenians. Due to the win, Armenia was not captured by the Turks. The battle of Sardarapat is one of the most crucial moments of Armenian history. It is often compared to the battle Avarayr. If we didn't defeat the Turks, they would have captured Yerevan, and nothing would have remained of our nation.

The memorial complex includes several structures: the bell tower, the sculptures of two huge winged bulls, the "Victory" wall, alley of eagles. The most prominent and beautiful part of the complex is the bell tower with a total height of 25 meters. There are three rows of bells hung in it which ring every year on the day of the brilliant victory. On both sides of the tower, there are two massive sculptures of winged bulls. The tower is erected on the place where Armenian soldiers are buried. 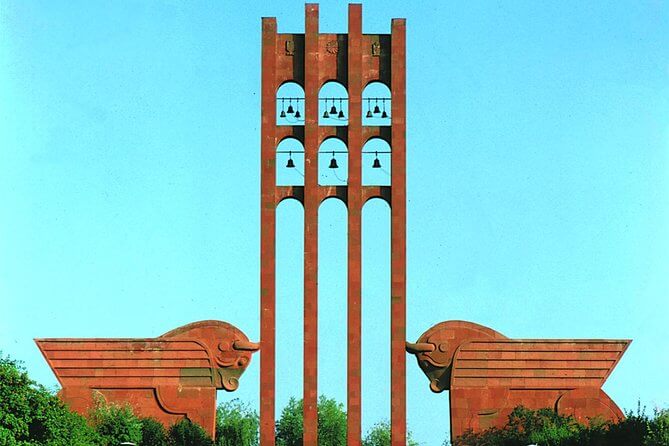 According to Rafayel Israelyan, the idea is that the bulls protect the tombs of the fallen heroes. There is also a memorial wall in the territory of the complex which is called the "Victory" wall. It is decorated with several beautiful bas-reliefs and high reliefs of soldiers, women, and girls who supported them during the battle.

The height of the wall is 7 meters, and on the edges - 9 meters. Some part of the wall is empty, and there are no bas reliefs. Another component of the memorial complex that needs to be mentioned is the alley of eagles. Those five eagles symbolize the fighters' courage and the indomitable spirit of the Armenian people. The sculptures of those proud birds were supposed to look toward Turkey, but unfortunately, the Soviet Union disapproved the idea and didn't allow it to be realized. Nowadays, the Eagles look to the biblical Ararat, and it seems like that they protect our Motherland. 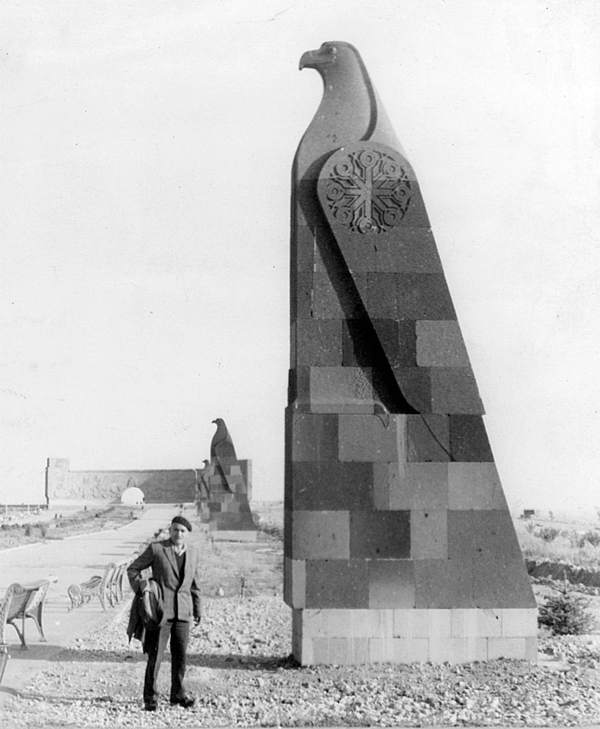 As you see, each detail of the complex has a special meaning and significance. The memorial also includes an ethnographic museum which was built a little later. Rafael Israelyan thought that something was lacking and initiated the construction of the museum. The building of the museum resembles a castle due to its unique architectural form. It has two narrow windows. One is pointed to Mount Ararat, and the other to Mount Aragats. The museum has a collection of more than 70,000 items. There you can find numerous photos and documents revealing the scenes of the historic battle. The collection is huge.

The Sardarapat memorial is a magnificent symbol of pride, courage, and survival. It is worth to be visited if you are interested in the history of Armenia. Coming here, you will be amazed that every single component of the complex stands for some reason. Don't forget to request a tour guide to explain the story behind this impressive architectural ensemble. It is noteworthy that memorial is not only a monument but also a venue for military parades. As you see, "Sardarapat" memorial is one of the most important symbols in our country.

Not Sure Where to Go on Your Vacation? Here are Some Fun Options