About 3000 years ago a new kind of activity was originated in Finland which is practiced on ice surfaces on naturally frozen water. Originally ice skaters were sharpened flattened bone strapped to the bottom of the foot. The first ice skater was invented by the Dutch in the 13th century.

It was already in the 17th century when it was brought to Britain where the first skating club formed in 1740. A little later the movements and the official rules of ice skating were developed․ Figure skating became a sport in the first skating Congress in 1871.

Still, in ancient times, this kind of activity was in the center of attention. People started to make rinks for the sport, exercising and leisure. Till nowadays it continues to be one of the most favorite activities in the cold weather. Armenia is not an exception we love to skate when the chilly winter is around.

The ice skating lovers can find either open-air or closed rink right in Yerevan. The center of the pink city decorates a small Lake Sevan or the Swan Lake. Near one of the beautiful buildings of Armenian architecture, Opera and Ballet Theatre situates the artificial lake which has the shape of Armenia’s blue pearl.

Swan Lake is surrounded by trees, benches, and different cafés. It is considered the best place to pass hot summer evenings just sitting on the grass or one of the open cafes and enjoying the beautiful view. 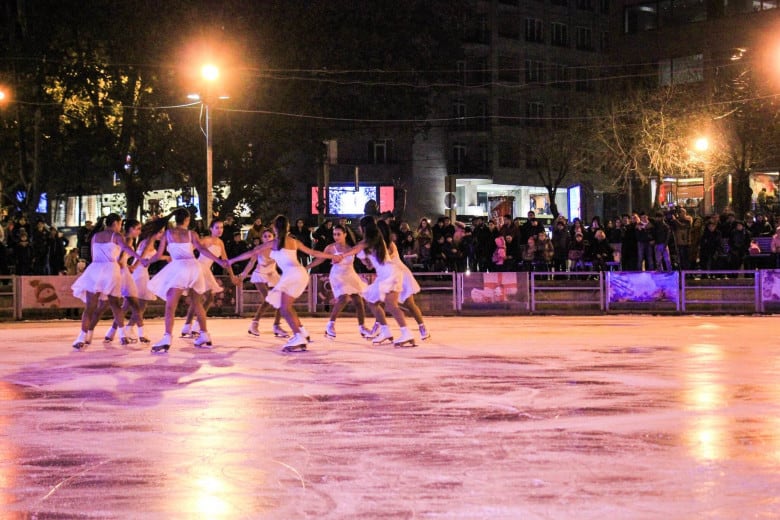 The second skating rink is Karen Demirchyan’s Sports and Complex center. This is the biggest closed rink which is situated inside the building of Sports Complex. It is the most favorite winter leisure activity for the locals and tourists. For inspiring and motivating the skaters the stuff turns the different types of music which encourages everyone. The rent cost for the skaters is 2000 AMD (4.12 USD/ 3.51 EUR) for an hour and the working day starts from 12:00- till 24:00.

The third fairy newly-opened place is Winter Park. The biggest open-air skating rink in Yerevan works in the area of the park. The cost of the skate rent is 1500 AMD (3 USD / 2 EUR) for an hour.

Winter Park is a place where you feel yourself in a fairy tale. The area of the park also includes an ice-bar, café, Santa’s Post office, Ice slides, Elf School, Trolls’ House, Miss Claus’ Pies, and Northern Deer.