Those who want to discover Armenia, know the culture and learn about history, are welcome to these top 5 historical places of Armenia. It’s of course not enough, but I gathered the places which are so important for me and every Armenian. Let’s go.

Maybe you’ve heard that Armenia is the first nation that accepted Christianity as a state religion. But what was before Christianity? If you think that it was in the ancient times and nothing remained, you’ll be wrong. Even though Armenians became Christian, they kept certain buildings that are the real architectural wonders of Armenia. 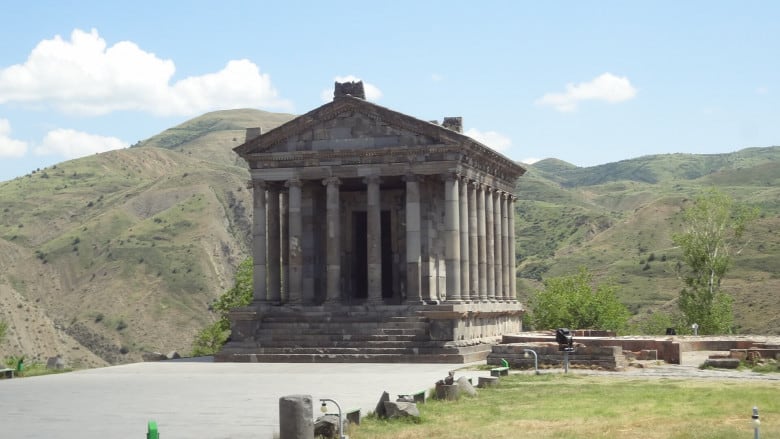 One of those wonders is the temple of Garni, a pagan temple which dates back to 2nd century BC. Located in Kotayk region, 30 km from the capital of Yerevan, is a great sample of Hellenistic Architecture period. In the center of the temple was the columnar temple which 24 columns symbolized 24 hours. During the excavations, the archaeologists have discovered the ancient bathroom which has 5 rooms in it. The interesting part in the temple is the mosaic floor which was made from natural stones of 15 different colors. The mosaic theme was taken from Greek mythology.

The other place which is the Holy place for all Christians, is Khor Virap, a monastery where Gregory Enlightener was imprisoned. He was one of the few propagators of Christianity but as because in that times, Armenians were pagan, the King of Armenia (Trdat 3rd) punished him in prison which was a deep hole with snakes and poisonous insects. Gregory spent there long 14 years in that hole surrounded by snakes and scorpions. In that period, 37 nuns escaped Armenia from Rome, among them were Gayane and Hripsime. When they came here, Trdat wanted to marry one of the nuns but after getting the rejection of the nun, he ordered to kill them. But their death tormented the King and soon after, he got sick. 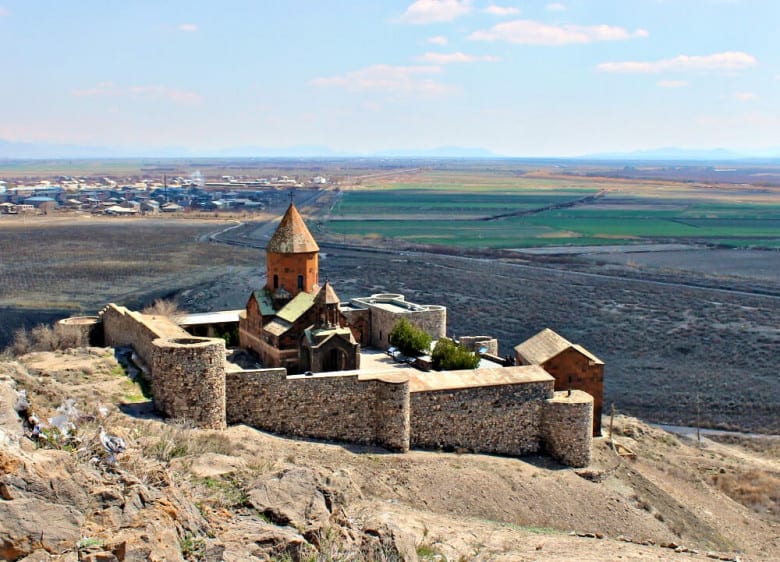 One day his sister saw a dream in which, only Gregory healed him. So, the King ordered to free him, and at that time, Armenia adopted Christianity as a state religion in 301 and thus became the first country in the world that adopted as a state religion. The right side of the Great Altar is a narrow hall through straight steps leading the ground floor. There is half ruined gates, refectory, cells, and other buildings. In the middle is located St Astvatsatsin which is the main church, the bell-tower is located in the western part. In the south-eastern part of the church is situated a hole 6m depth, with a domed roof. Here was the above mentioned Gregory's prison. According to the history, he survived only with the help of a kind woman who during 14 every day brought him bread and water.

The southern beauty of Armenia, Tatev Monastery is in the list of must-visiting place for everyone. Visiting Armenia, without visiting Tatev is like visiting France without seeing Eiffel tower. The monastery is located in a high canyon and considered to be the treasure of Armenia, proudly attracting everyone who has ever visited here. Tatev is situated in Goris region, the southern part of Armenia, 314 km from Yerevan. The complex of the monastery was built in the 9th century, but the main church of the monastery was built in 895 by Hovhannes Bishop and the help of Syunik’s dukes Grigor Suphan and Dzagik. In 906 was added “Gavazan” quavering monument. 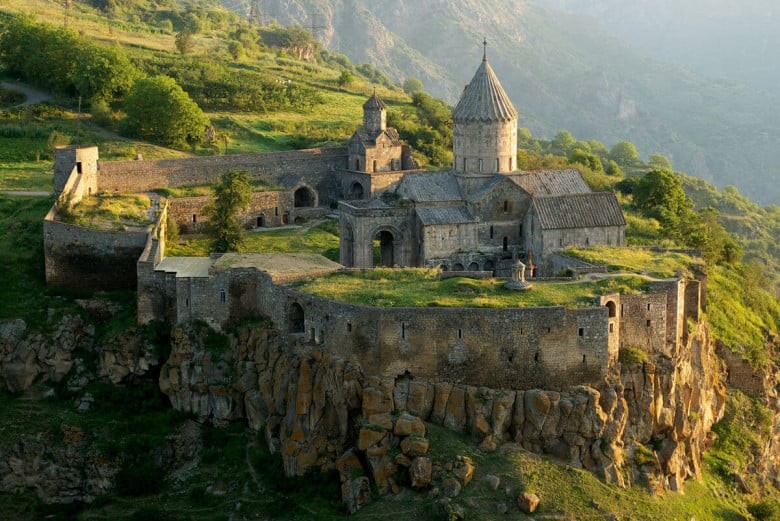 The Tatev monastery complex has three churches; the Poghos Petros Cathedral, St Astvatsatsin and St Grigor Churches, the Grigor Tatevatsi mausoleum, “Gavazan” monument and other historical buildings. There you can see an ancient oil mill with stone grinders, mighty fortress walls upon massive cliffs, the swinging pillar which has a unique medieval structure: the last saint of the Armenian Church; ancient frescoes by European master and of course, the tomb of Grigor Tatevatsi. But that’s not all, for reaching Tatev monastery, you need to sit in a record holder ropeway which is already recorded in the Guinness Book of Records as the longest reversible cableway in the world (5752 m) The cable car travels at a speed of 37 km (23 mi) per hour and a one-way journey takes 12 minutes of unforgettable flight above the ravine of the fierce Vorotan River. During the flight, you will be accompanied by audio guide telling about the history of Tatev Monastery.

In 2007 Armenian and Irish archaeologists discovered the oldest winery in the world, which is located near Areni village in The Vayots Dzor Region. Also, the Areni caves has recently become a worldwide historical sight because the world’s oldest shoe and winery were found there. Now, all the tourist can see the caves and the remnants of the winemaking materials, as well as a wine press, pottery sherds, storage jars and fermentation vats. 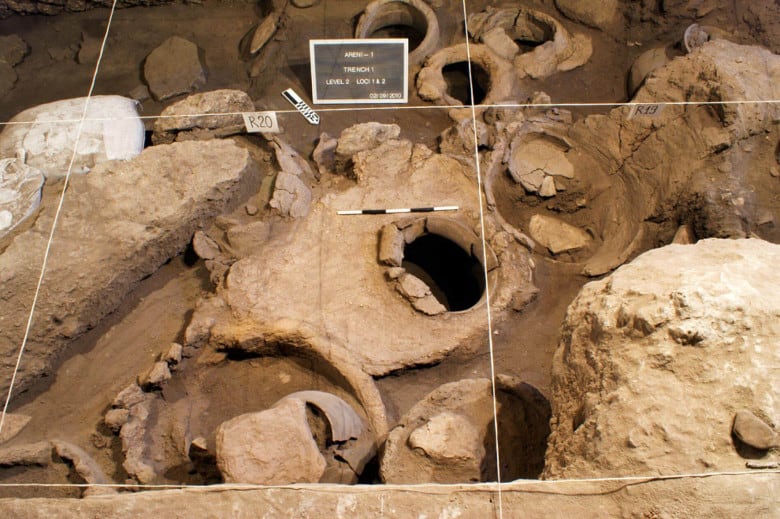 A year later, in that same cave, archaeologists were found, the oldest shoe in the history ever. Areni is known as Armenia’s wine region and has been producing grapes and wine since the cave-winery was constructed 6,100 years ago, make sure to taste the wine in Areni and you can also become part of Areni’s wine history.

Amberd is a 7th-century fortress on the slopes of Mount Aragats. It’s said that during Bronze age and the Urartian period the castle used to be a summer residence for kings. A name of the castle means “fortress in the clouds”. There were other versions of name: Hanberd, Hamberd, and Ghzghala. Some sections of Amberd walls were constructed in the 7th century as a possession of the noble House of Kamsarakan. In the 8th century, the castle passed to Bagratuni House later becoming one of the most important military bases of their Kingdom. Then the fortress was passed to Pahlavuni House. Four centuries later Vahram Pahlavuni built the Church of Surb Astvatsatsin in 1026, fortified the complex with thicker stone walls, and added three bastions along the ridge of the Arkhashen canyon. 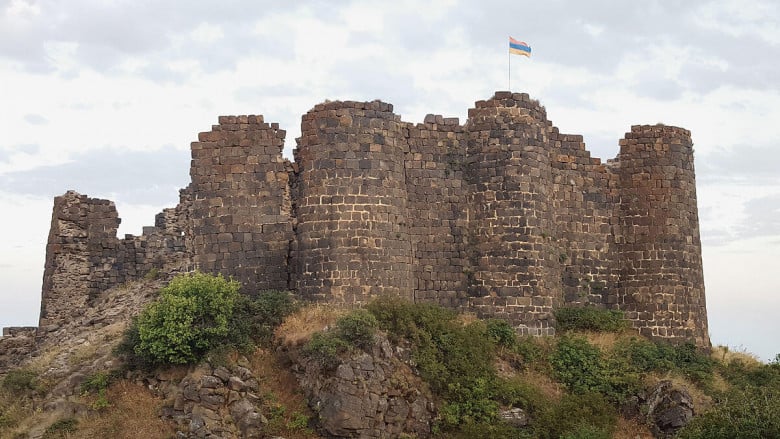 In the 1070s Seljuk Turks invaded Amberd and turned it into a military base. But in 1197, a joint-army of Armenians and Georgians led by General Zakareh Zakarian liberated the fortress. Under Zakarian control during the 12th and 13th centuries, the castle and outer buildings were renovated and reinforced. Looking to this castle you go to the history and if you close your eyes maybe see the kings. It's interesting and exciting. To be here is a little adventure. You’ll see how lived the kings what they had. The words can’t tell you everything. So visit yourself.

If you have more than 5 days in Armenia don’t miss a chance to see other historical places of this old country.