Carpet weaving is a traditional Armenian craft that has a history of thousands of years. It has been part of Armenian culture since ancient times. A carpet or a rug is a woven textile that is mostly used to cover floors. Frankly speaking, we can't imagine a traditional home without a carpet or a rug, can we?. Today we are going to find out everything about Armenian carpets - their history, popularity, symbols, etc. In this article, you will also know which are the famous shops that sell Armenian carpets. Let's start!

The History of Armenian Carpets

It is still unknown when the carpets were used first, but some archeologists proved that they appeared in 2-1 millennium BC. They were considered a necessity in all traditional Armenian homes and were used to cover floors, decorate walls, etc. Due to their popularity and high-quality, Armenian carpets were successfully exported and sold abroad.

Historians noted that Armenian carpets had exceptional quality because they were made from high-quality wool and were dyed with natural colors, especially with "vordan karmir". It is a scale insect that was used to produce carmine dyestuff in Armenia and also in the Persian Empire.

Unfortunately, very few examples of the earliest period have survived. The oldest Armenian carpet, which has survived to this day, is the Pazyryk dating from the 5th to the 3rd century BC. It was found in Siberia and now is in the Hermitage Museum in St. Petersburg. Some people claim that it is Persian, others say that is Armenian. 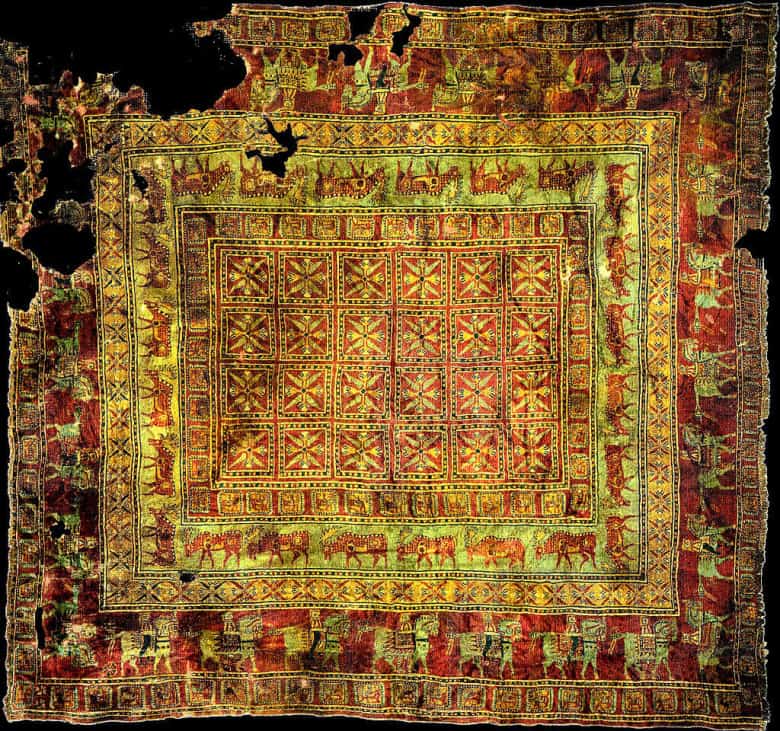 In the territory of Armenia the earliest carpet has been discovered in the Artik burial ground ( dating to the 3rd millennium B.C) and Karmir Blur (dating to the 7th millennium B.C.). Nowadays, rug making in Armenia continues to be popular. There are some private companies and individual weavers who keep alive the traditional craft. It must be noted, that nearly all the same techniques, designs, and colors from ancient times are used these days.

The most widespread materials to produce carpets are sheep or goat wool, cotton, linen, silk, hemp. For coloring, only national dyes are used. Armenian carpets have different ornaments. They are very diverse and each one has its specific meaning. Now let's explore some of the most famous ornaments and symbols of Armenian carpets.

The Symbols Of Armenian Carpets

The design of Armenian carpets is very diverse. The ornaments reflect the traditions, rituals, and beliefs of Armenia. To understand the meaning of them, you must have knowledge of Armenian history and culture.

Now, let's see what are the most popular symbols:

1. Wheel of eternity: This symbol can be found on many Armenian carpets. It's consists of eight curved wings and in its form, it is very similar to the Sun. It is believed that those wings symbolize the eight Armenian Gods in the Pagan period (Ara, Anahit, Vahagn, Astghik, Mihr, Nane, Tir, and Vanatur).
2. Cross: Armenia was the first country to adopt Christianity as a state religion in 301 A.D. That's why the cross symbol is quite popular among the ornaments of Armenian carpets.
3. Dragon: Vishapagorg (the Dragon rug) is one of the most popular types of Armenian carpets. Dragons were the symbols of victory. Armenians believed that if they had Dragon rugs in their homes, they will be safe and protected from the evil.
4. Squares: This symbol embodies the four parts of the world.
5. Armenian Letters: Some traditional Armenian carpets have the Armenian alphabet hand-woven on them. By the way, it was invented in 405 A.D by Mesrop Mashtots.
6. Floral-Animal Symbols: These types of symbols are also very widespread. The most remarkable examples are called "Artsvagorg" (Eagle Carpet) and "Otsagorg" (Serpent Carpet).

Where To Buy Armenian Carpets

If you want to buy a traditional Armenian carpet, we can offer you some stores and companies, so you can easily make your choice. In those places, you can find both antique and modern, high-quality carpets. Price varies and depends on many factors.

1. Megerian Carpets: "Megeryan Carpet" company was founded in New York in 1917. It specializes in producing and selling hand-woven carpets. The store is situated on Madoyan street. There you will find many hand-made oriental rugs and carpets.

2. Tufenkian Artisanal Carpets: The company was founded in 1994. It is engaged in the production of handmade carpets woven from 100% natural wool. The products are sold in the store which is situated on Hanrapetutyan Street. The company has also showrooms in the USA and Europe.

3. Postoyan Carpets: One of the most popular shops is called “Antique carpets". It is situated on Abovyan street and belongs to the Postoyan family. Here you can find old and antique carpets. Some of them are 50-60 years old.

4. Jrashogh carpet factory: The company was founded in 1964 in Ijevan. It produces both technical and handmade carpets. Nearly 20% of the products are exported to Russia.

5. Simonyan Carpets: The company was founded in 1992. It is engaged in manufacturing and selling hand-woven carpets. The shop is on Arshakunyats Avenue.

6: Vernissage: It is an open-air market that lies along Aram and Buzand streets. Here you can find traditional Armenian jewelry, souvenirs, handicrafts, carpets, rugs and many more.

You can also find some exclusive pieces of Armenian carpets in the History Museum of Armenia but they are not for sale. As you can see, there is a great choice for anyone. Which one is your favorite? Let us know!