There are a lot of great moments that happen during the day, but a wedding is one of the most important events in a person's life! Every country has its customs and traditions. Armenian weddings have always been unique, but it is difficult to hold on to traditions over time. Changes are inevitable. Let's have a look at the history of Armenian weddings! 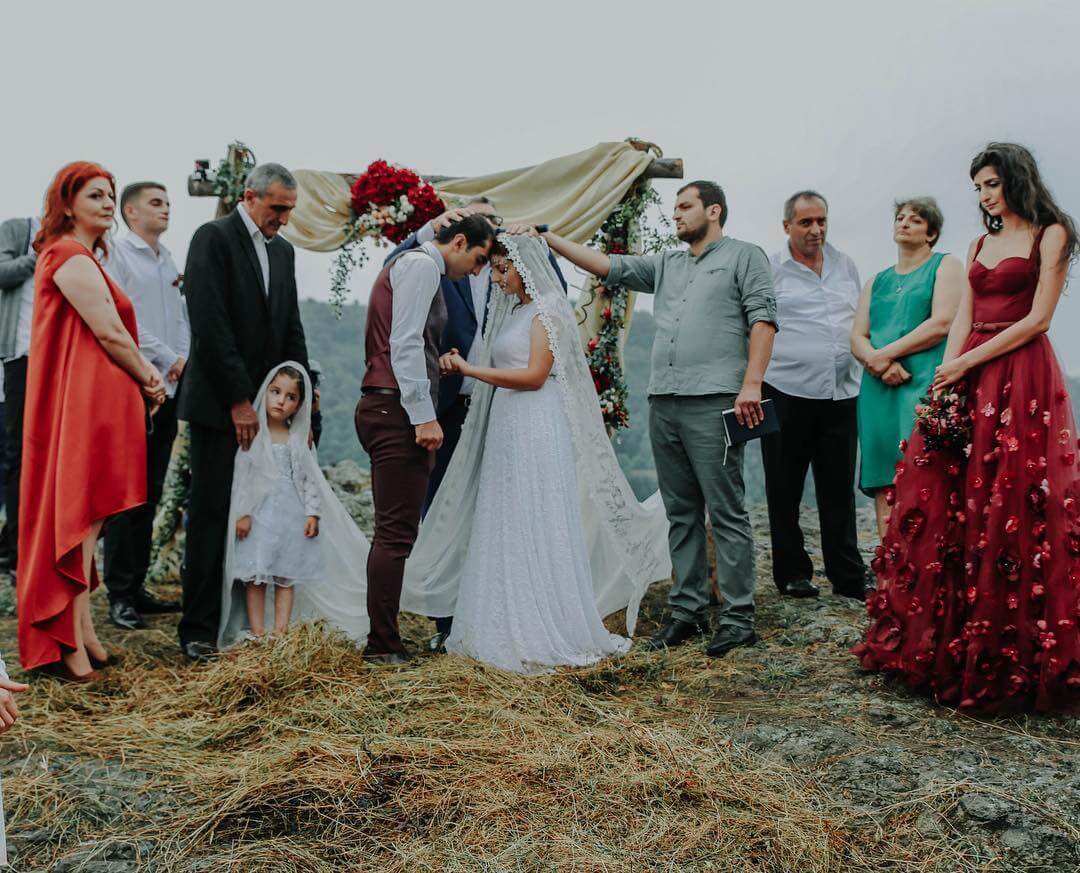 Our traditions are conservative when it comes to family culture and values. In ancient times, Armenians thought that autumn and winter were the most suitable months for the wedding as in spring and summer, people were mainly engaged in agricultural work. It should be noted that young people didn't have the right to choose their mate on their own. This decision was often made by their parents, who tried to marry their children as soon as possible.

The bride was usually chosen from their local region or the neighbouring village. First, the boy's parents visited the future bride and got their parents permission so their son can marry her. After that, the parents of both sides got officially acquainted. Then, the relationship entered a different stage. The couple got engaged. 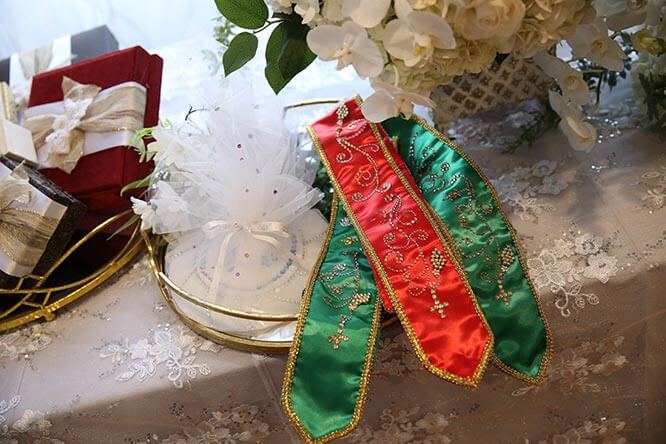 On that day, the groom bought a ring for the bride, and she accepted it as a sign of commitment. This ceremony represented a formal agreement to future marriage. Traditionally, the engagement party was hosted by the bride's side. After the engagement, the wedding date was assigned, and the preparations began.  By the way, one of the most important decisions was the choice of godparents who had a unique role during weddings. The Godfather was chosen from the groom's closest friends. The Godfather and his wife had to set an example for newlyweds. That's why they always wanted a person who had a  well-established family.

Armenian weddings are usually big, having more than a hundred guests. In ancient times, wedding ceremonies lasted seven days and seven nights. The wedding cars were decorated with a fox. It was believed that the fox announced the arrival of the groom. According to the Armenian tradition, wedding ceremonies began early in the morning. A group of musicians went to the bride's house. 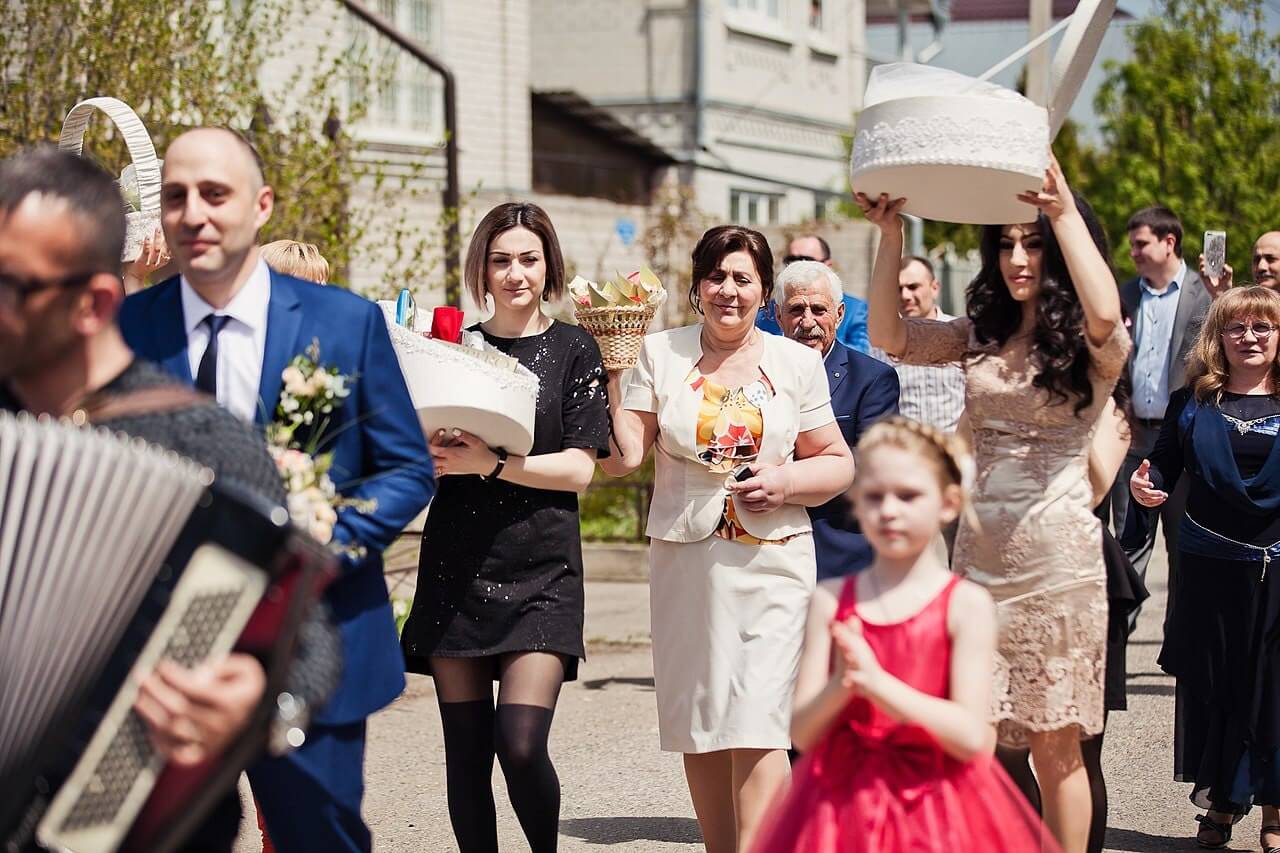 The guests invited the Godfather, and everybody started to dance, sing, congratulate each other, make toasts, etc. Then the bride and the groom went to the church to receive God's blessings. After the church ceremony, the guests showered them with rose petals, and then the newlyweds and the guests went to the groom's house. Upon their arrival, they had to break a plate, which meant that evil was leaving the house, and good luck is on its way.

After that, the mother-in-law put lavash (flatbread) on their shoulders and offered them a spoon of honey. The last one symbolized the sweet start of their life together. The joyous wedding feast was usually held in the house of the groom. The newlyweds, their relatives, and friends gathered there and started to celebrate the union. The guests ate traditional dishes and made many toasts. The most popular toast is "May you grow older on the same pillow." The wedding ceremony ended late in the night.

Today, not all rituals have been preserved, but many of them are still up-to-date. For example, some grooms continue to wear red and green ribbons as a symbol of fertility. Another unusual ritual is stealing the bride's shoe. When the bride is getting dressed, one of his shoes is taken, then after negotiations, it is returned to the owner. 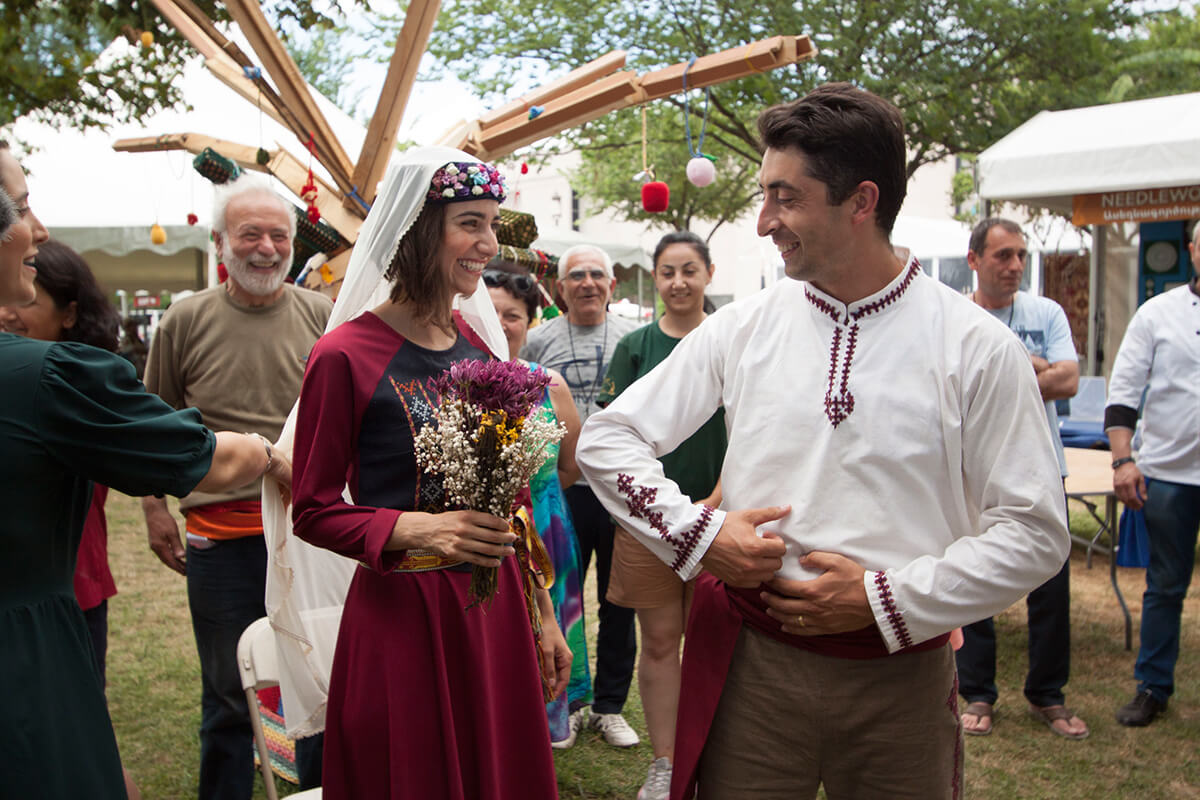 You may have noticed that when the couple goes out of the house, the bride's brother keeps the door closed with a sword and doesn't let them take their sister. It is a joke and should not be taken seriously.
When the groom brings his wife home, the mother-in-law meets them with sweets, especially honey. The newlyweds eat a spoon of honey, after which the groom's mother puts flatbreads on their shoulders. These rituals can be seen in many Armenian modern weddings.

Armenian wedding traditions have undergone several changes, although much remains the same. Today, fortunately, young people choose their mate on their own. The girls wear modern classic white dresses while the boys prefer classic suits. The dowry has been replaced by money, house or car keys and sometimes with honeymoon tickets in any country. 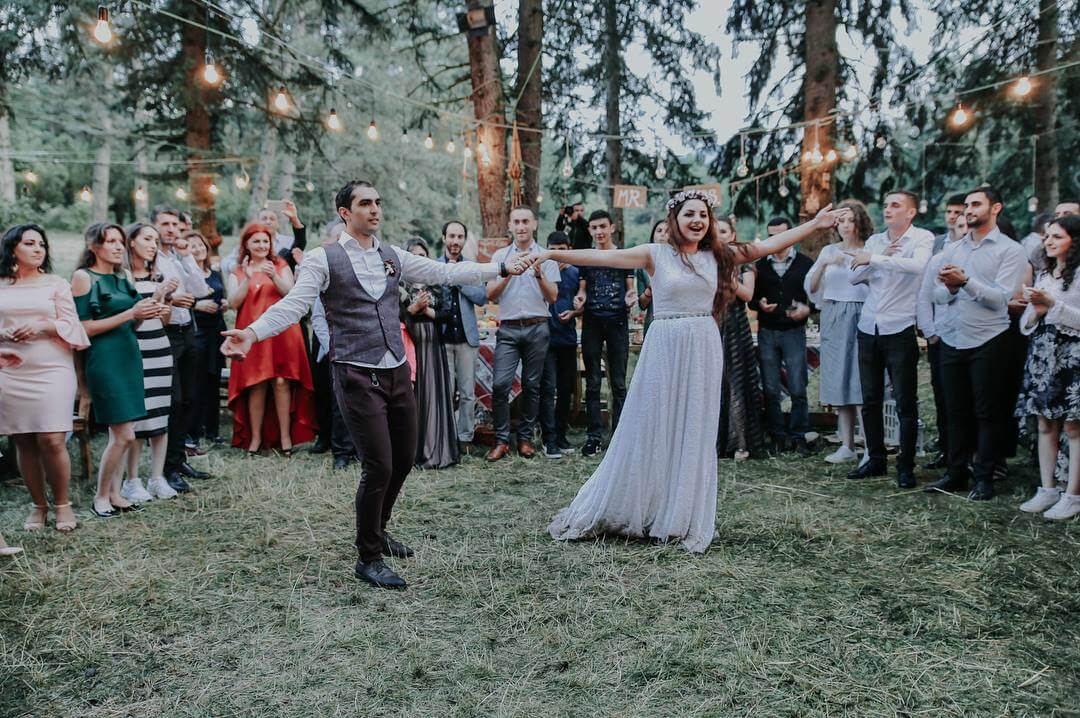 In recent years, girls tend to have a bridal shower. During this pre-wedding party, the friends of the bride bring many gifts for her. As you see, Armenians try to combine our wedding traditions with European ones. Nowadays, the wedding ceremony lasts only one day. On the wedding day, the bride's side lays the table and waits for the groom's arrival. The groom's side often arrives on luxury wedding cars. Then he takes the girl out of the house, and they go to the church. Some favourite places are Echmiadzin, Geghard, the churches of Gayane and Hripsime, and many others.

The joyous part of the wedding takes place in a restaurant. At the entrance hall, the newlyweds eat a spoon of honey, break a plate, and then enter the restaurant. One of the most important traditions is the sequence of toasts. Armenians toast to their relatives, parents, and loved ones. During the ceremony, the bride dances her wedding dance. She also throws her bouquet into the crowd. If someone catches it, it typically means that she is the next person to get married. The ceremony ends late in the evening with the cutting of the wedding cake and giving flavours to bachelors. After the wedding, the newlyweds usually leave for the honeymoon.

As you see, our wedding traditions have changed over time, but some rituals are still relevant. However, it is essential to preserve the traditions that are typical only to us so that we can pass them to our generations.