On September 21 I attended Yerevan’s festivities celebrating the 27th anniversary of Armenia’s independence from the Soviet Union in 1991. Here they would call that day the founding of the Third Republic of Armenia, after the second republic (Soviet Armenia) and the first republic (independent Armenia from 1918 to 1920).

As a tourist from the United States, I found the Armenian Independence Day holiday as celebrated in the nation’s capital fascinating. It’s a part patriotic celebration, part street fair, and all family holiday. Never have I seen so many children having such fun during a holiday, except perhaps during Halloween back home. 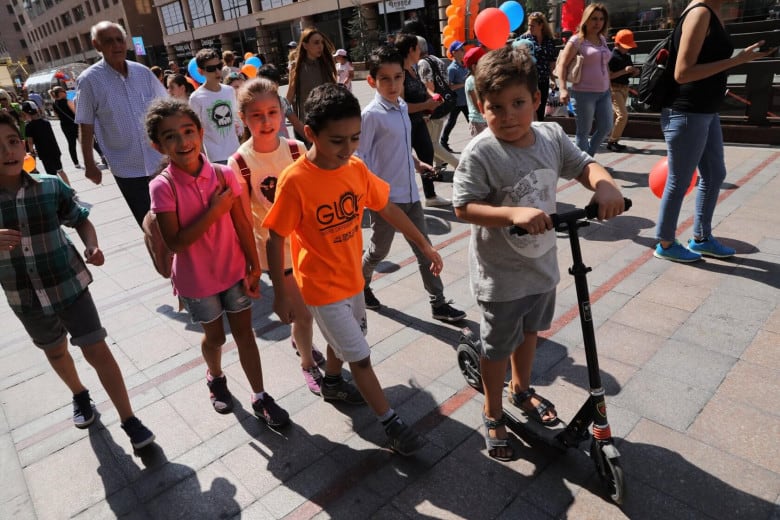 I recommend visiting Yerevan during Independence Day if you want to have some fun, people-watch, entertain your children, and understand the spirit of the city all at once. You can start in Freedom Square near the Opera House, stroll south down the stylish pedestrian boulevard Northern Avenue, and end up in Republic Square, the heart of activity. 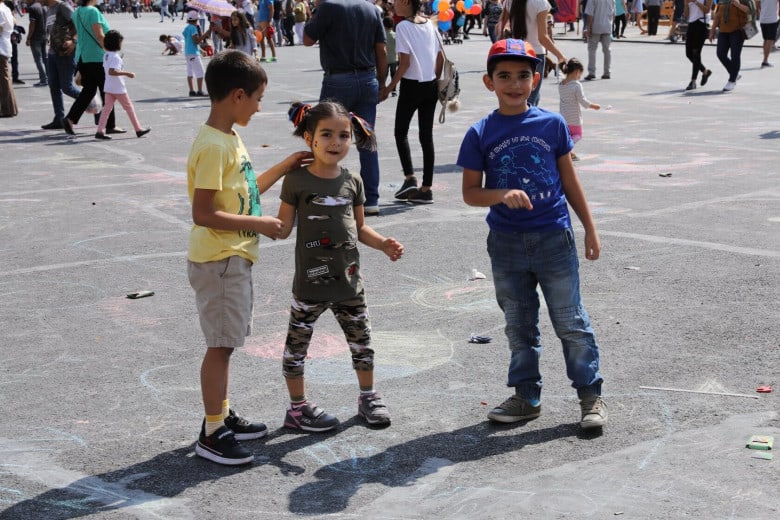 Along the way you will see young people carrying their small pots of paint to render the tricolor Armenian flag – red, blue, orange – on the faces, arms, and shoulders of Yerevan’s patriotic citizens. You’ll surely be even more welcomed among the Armenians if you show a little holiday spirit and pick up a small Armenian flag from a street vendor, or perhaps a trio of red, blue, and orange balloons. To make the holiday a little sweeter, you can also buy a soft-serve ice cream cone or a large serving of cotton candy. 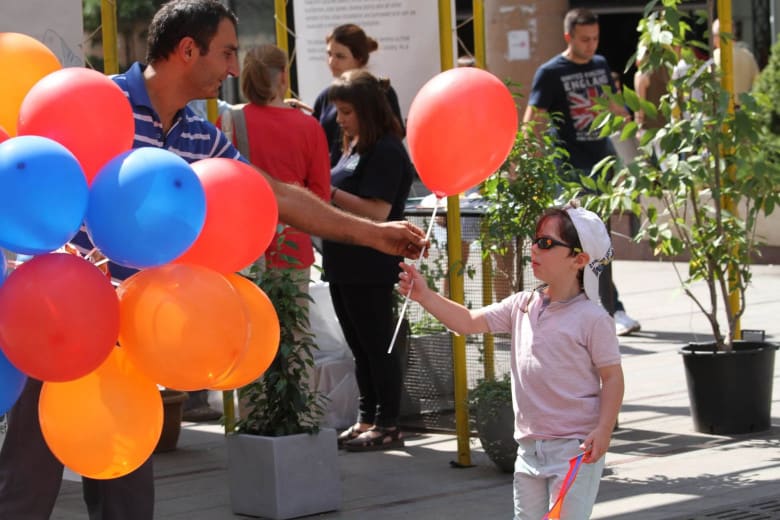 Your walk will be filled with plenty of opportunities to watch Armenians showing off their talents and having fun. This year youth athletes were giving demonstrations of wrestling, badminton, and fencing in and near Freedom Square.

Northern Avenue was decorated with flags and flag-colored balloons. Patriotically-adorned pedestrians, cyclists, and children on scooters fill the boulevard and the nearby streets, which are closed to vehicular traffic. It is Republic Square, however, that hosts the holiday party. 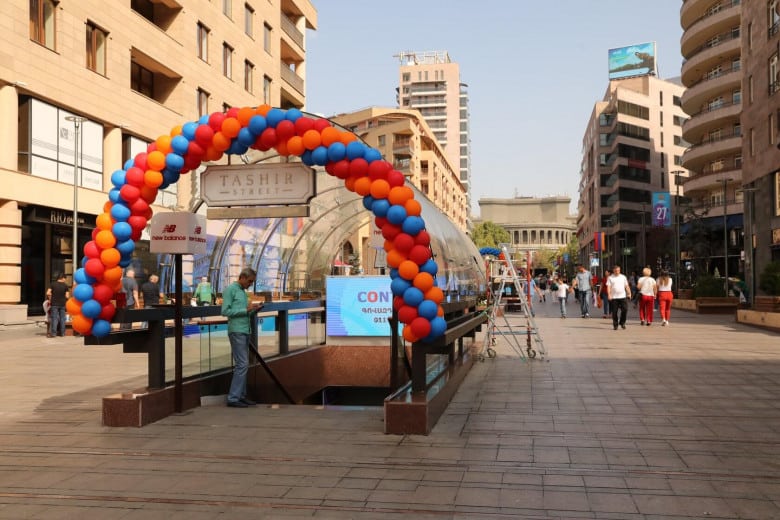 You’ll enter Republic Square from Northern Avenue near the square’s famous pulpulak – the community drinking fountain continually flowing with some of the coldest and freshest public water you’ll taste – before you pass by the square’s central pool and fountain. 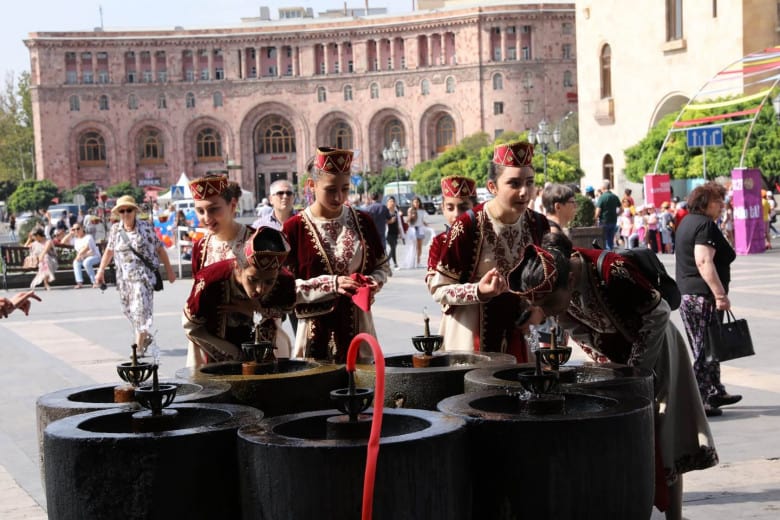 Continuing south, the square’s roundabout – normally a swirling mass of cars, but now emptied – will be the center of the celebration. Around noon children will cover the street with chalk drawings pulled from their imaginations. These sketches will include not only the suns, clouds, and rainbows typical of children’s drawings, but also flag-colored hearts, renditions of famous Armenian symbols such as Mount Ararat and medieval Christian churches, and patriotic slogans. 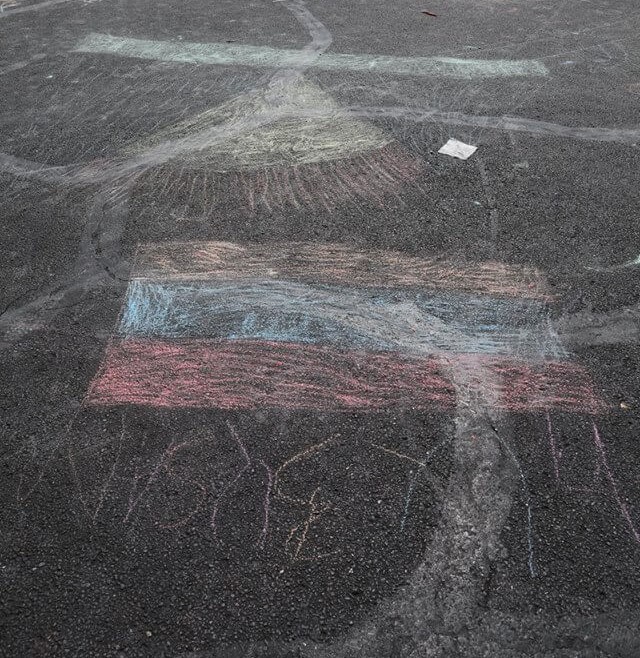 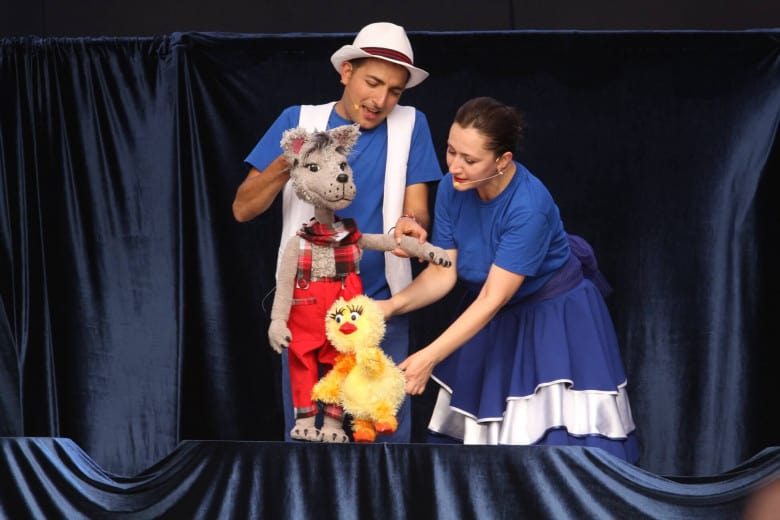 In the center of the street, you can buy delicious khorovats – Armenian barbecue grilled right in front of you – and sit at a small table to enjoy the ambiance.

While relaxing you may spot a pair of roaming male-and-female clowns or even a pair of costumed stilt-walkers who may be willing to scoop up your small child for an amazing photo opportunity. If you’re in the square at the right time, you’ll also be treated to a performance by a marching band, smartly-costumed in their martial uniforms. Feel free to take as many photos of the festivities as you want, but if you take photos of individual people, they may ask you for your contact information so they can get a copy of the moment you captured! 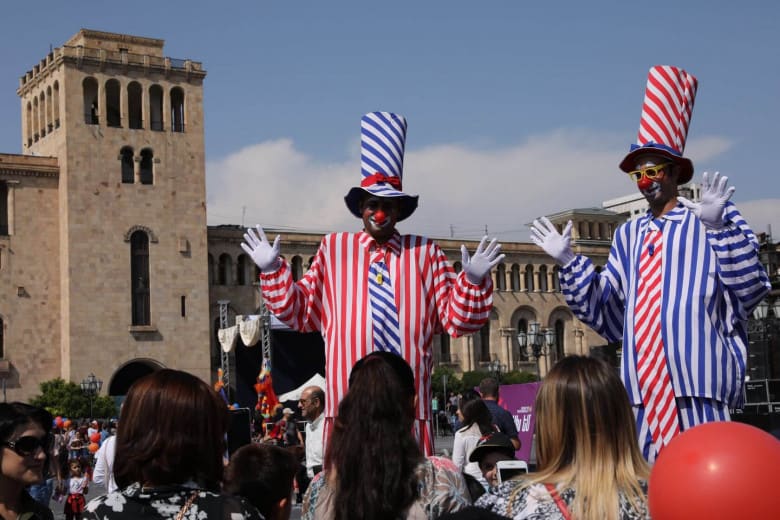 This year’s Independence Day was a special occasion, being the first such celebration since the April 2018 civil disobedience movement that peacefully displaced Armenia’s ruling governmental party. It was a protest movement led by the young Internet-savvy generation, and the city’s young adults gave this Independence Day a youthful feel, full of energy and possibilities and a sense of openness and freedom.

In Republic Square, I was treated to a surprise appearance of the country’s new reform-minded prime minister, Nikol Pashinyan, who walked among the people with only a light security detail separating him from the admiring crowds. He headed down the street to a stage where a rock band was performing while citizens took turns waving a huge Armenian flag in front of the path of his entourage. A man of the people, Pashinyan decided to make a stop at one of the city’s popular coffee shops, and the crowd waited expectantly for his return. 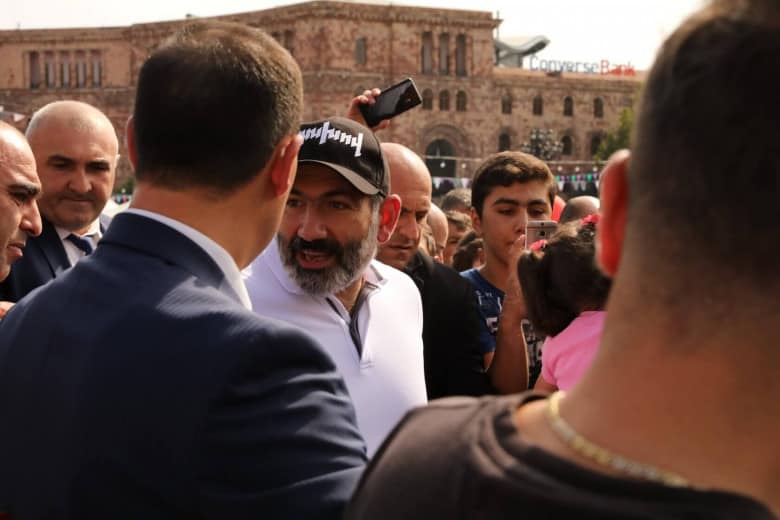 Although I moved on before Pashinyan came out of the coffee shop, I felt his influence later that evening when walking by the Presidential Palace on Marshal Baghramyan Avenue, where the iron gates to the prime minister’s residence had been thrown open, allowing the people to walk up to the building and take photos in front of it. Imagine trying to walk up to the front steps of the White House in Washington, D.C.! There is truly a sense of openness and change here in Armenia now, with little remaining of some of the oppressive aspects of the country’s past. 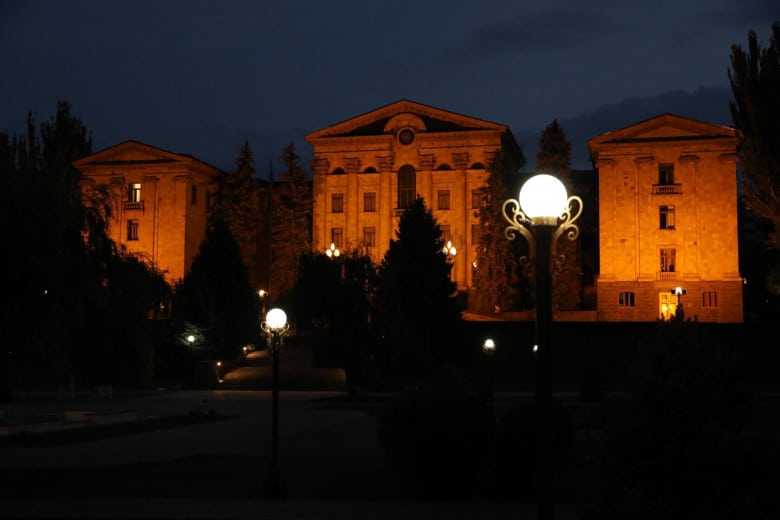 Independence Day in Yerevan is capped off by an evening concert in Republic Square followed by an 11 PM fireworks show. The fireworks do not burst high above the city, as in many large cities in America. Rather, they explode not far above the stately History Museum of Armenia. From the roundabout, you’ll see a photogenic juxtaposition of the square’s fountain below the museum, below the streaming pyrotechnics. 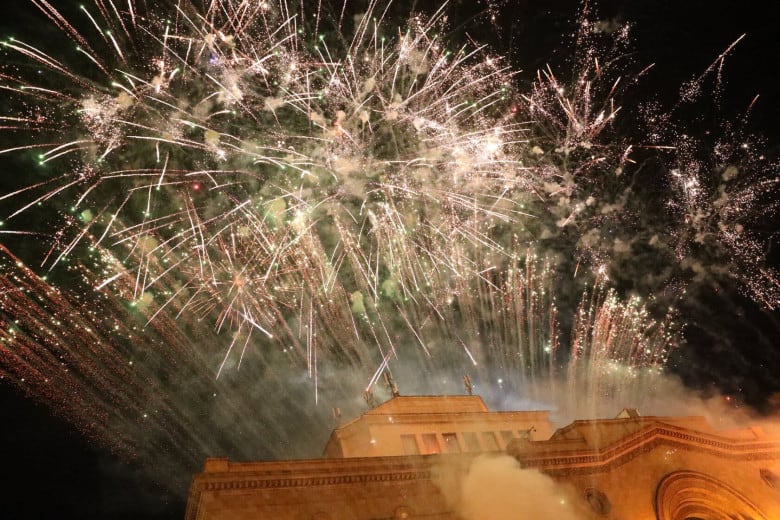 The fireworks’ proximity gives the show an immediacy and excitement that you can feel among the crowd – truly a great way to end the evening! If you want to continue the festivities afterward, just walk back toward Northern Avenue. Along the way, you’ll see twenty-somethings forming spontaneous circles to dance the kochari to traditional Armenian music, and on Nothern Avenue itself, there will be stages where a series of young bands play modern music. Every kind of entertainment is possible on Independence Day in Yerevan!