As an American tourist in Armenia, I’ve had two opportunities to discover Armenian culture. The first, five years ago, was a whirlwind trip. I’ve now returned for an experience that is a little deeper. During my first week-long visit I explored the capital Yerevan, Armenia’s cosmopolitan center. I also made short trips to some of the famous tourist sites outside the city, such as Echmiadzin Cathedral, Zvartnots Cathedral, the Temple of Garni, and Geghard Monastery.

Now, having had a taste of Armenia’s modern and ancient cultures, I decided to make the country my destination for my first long trip abroad. I hope to experience a foreign culture more intimately during my 3-week solo visit, where I have joined the Armenian Volunteer Corps to work side-by-side with Armenians as a tourism blogger for Armenia Discovery.

Since Armenia is off-the-beaten-path for most Americans, I had many questions about what I would experience here. What would it be like for an American traveling in the post-Soviet space? And could I hope to make sense of the culture in a country where Europe meets Asia, where democracy has superseded communism in my lifetime, and where the people’s sense of self-extends thousands of years into the past? I’ve been discovering the answers to those questions, bit-by-bit.

Before I visited Armenia for the first time, I avoided looking at too many photos of the country because I wanted to be surprised. My flight to Yerevan arrived at night, and when I woke up in the morning and looked outside, I was surprised. I had known that the double-peaked Mount Ararat, the national symbol of Armenia and legendary landing place of Noah’s Ark, was visible from Yerevan, but I didn’t realize how big it would be! Its imposing presence and elegant slopes can be appreciated by everyone in this city of 1 million people, home to a third of Armenia’s population. 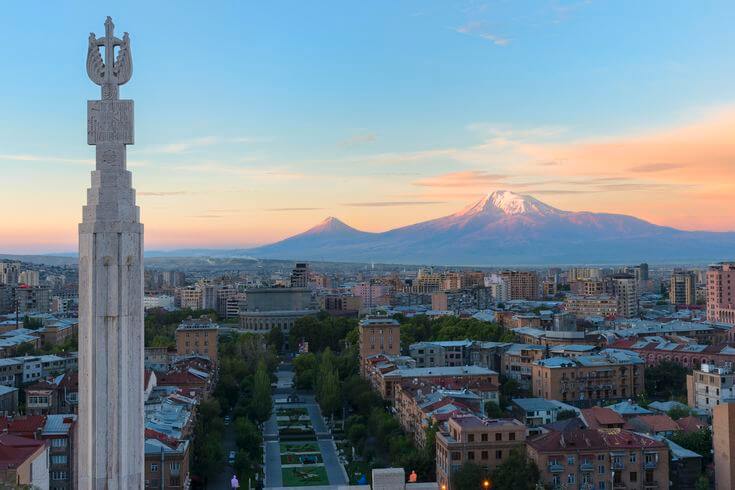 My first experience with a stranger on the street in Yerevan pleasantly surprised me too. Having just arrived by taxi to the Airbnb apartment where I would be staying, I was attempting to lift my heavy luggage over the curb when a young man rushed across the small street to help me – very different from my usual experience in the United States! In this small country the communal spirit is very strong, and helping each other is an important virtue. I think foreign tourists, as guests, especially benefit from this type of hospitality, and the locals are very curious about and welcoming of Americans.

Armenian culture can be appreciated not only via a long contemplation of majestic Ararat or the hospitality of the Armenian people, but also by immersing yourself in the Armenians’ complicated and fascinating history. Armenians are one of the world’s ancient peoples and their country has witnessed and survived the rise and fall of many empires. It’s been partitioned between the Romans and Parthians, the Byzantines and Sassanians, the Ottomans and successive Iranian empires . . . and it’s outlasted the Mongols and the Soviets too!

Armenia has been a Christian country for 1700 years and the head of the Armenian Apostolic Church has his seat at noble Echmiadzin Cathedral, a short trip west of Yerevan and a must-see for any tourist. Along the way from Yerevan, you can visit the ruins of Zvartnots Chatedral an important site in early medieval culture framed perfectly by Mount Ararat in the distance.

A short trip east of Yerevan will bring you to the Temple of Garni, a breath-taking Roman-era structure surrounded by cliffs on three sides. It’s believed to be dedicated to one of the Armenian pagan gods and nearby land once hosted the now-lost summer residence of Armenian kings! Further down the road is Geghard Monastery, a hybrid church and cave complex that in Armenian tradition hosted the spear (Geghard in Armenian) that pierced the side of Christ on the cross. 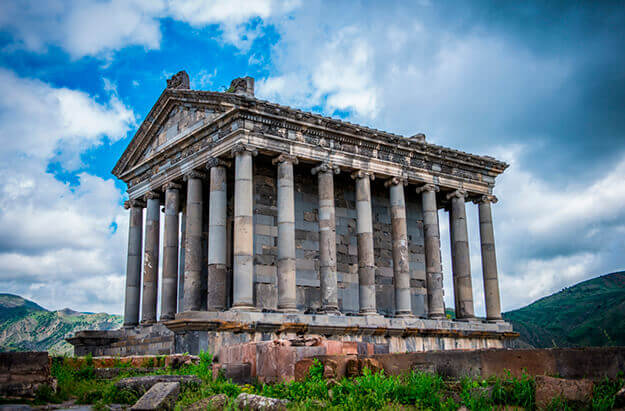 I’ve only been in Armenia a few days so far on my second trip, but I’ve already developed a deeper impression of its culture. The Armenian hospitality is as strong as ever, with several people stopping me to ask where I was from, and then whether they could do anything for me. I’ve noticed that people smile at strangers less here, but that’s only because they don’t know you yet. Once you engage them in conversation, many of them will soon be treating you like an old friend, especially once you tell them what you enjoy about their country!

If you meet them near their homes or workplaces, they are likely to offer you refreshments. In Yerevan English is common among the younger generation, so if you need assistance from a non-English speaker, they’re liable to call over a nearby student to translate. I found that the cashiers at the metro stations rarely speak English, but if you hold up your fingers you can get that many single-trip metro tokens if you hand over 100 Armenian drams per token. That’s about $0.20 per token – the cost of transportation is another major difference between Armenia and the United States! 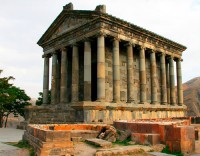 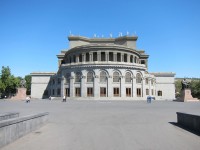 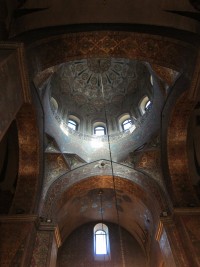 My first experience with local folk arts and village traditions actually came through my hotel in Yerevan, the new Silk Road Hotel, which is about a 10-minute walk from Baghramyan metro station just outside the city center. The hotel is a subsidiary of the Folk Arts HUB Foundation, which is dedicated to preserving and propagating Armenia’s traditional folk arts, especially textiles. The hotel thus houses a sort of small living museum in which you can watch women weaving traditional Armenian carpets, or preparing the national flatbread lavash in a clay oven called a tonir. The hotel staff graciously invited me to attend their first folklife festival, which was held in Sasunik village (really a small town of 4000 people) just 40 minutes outside Yerevan.

There I could watch traditional Armenian dances performed both by local children and professional dance groups, buy dried fruits and wine and handicraft items from Sasunik and other nearby villages (I bought two small carpets woven by children!), and even watch films from the Apricot Tree Festival. As usual, the villagers were quite friendly, one invited me to his homes for refreshments as I walked around the town taking photos, and I left the festival with a gift of a big bag of lavash, gata (cake-like bread), pomegranates, dried apricots, and cheese. It was quite a nice re-introduction to the Armenian people – I’m sure more wonderful experiences are soon to come!

How to Get Better at Budgeting