In the South Caucasus region of Eurasia, there is a beautiful country called Armenia which has a very little area. Thus you cannot find it on the world map without knowing the exact place of it. Armenia is bordered by Turkey, Georgia, Azerbaijan, de facto independent Artsakh, and Iran.

When Tigranes the Great was the king of Armenia, the country became the most influential state to Rome’s east. Not only during this period but very often the area of Armenia was at the center of the attention of all the neighboring countries.

Armenians had many battles against opponents. Sometimes they lost some areas of the country but never their identity. Nowadays, the area of Armenia is 29,743 km2 and it has a population of approximately 3 million people. 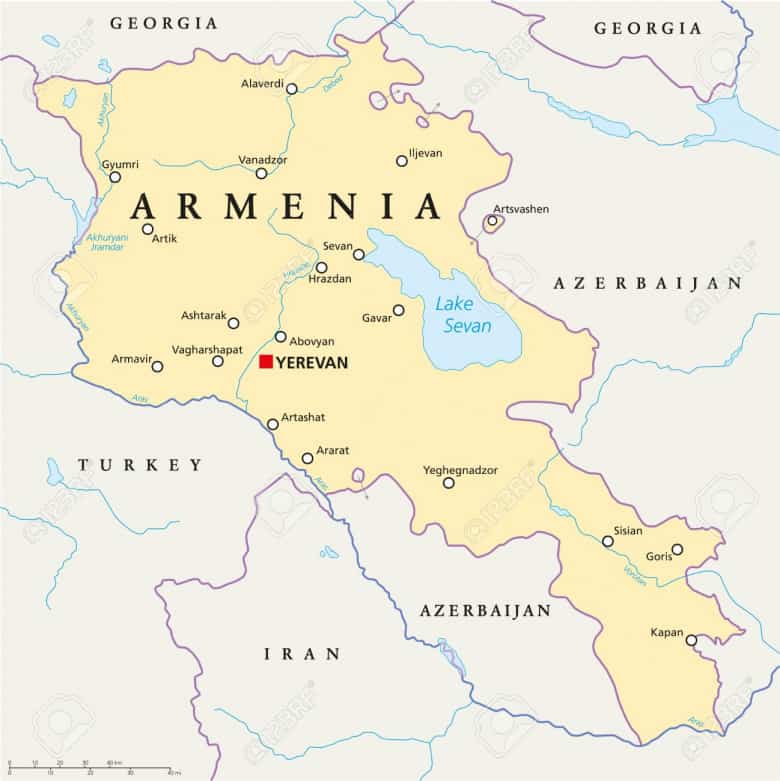 If you have a close look at Armenia’s map, you will find out it looks like a beautiful, young lady. You can see the face, nose, and hair of the girl.

There are ten provinces in Armenia which are Aragatsotn, Ararat, Armavir, Gegharkunik, Kotayk, Lori, Shirak, Syunik, Tavush, and Vayots Dzor. Yerevan is the capital of Armenia and is a separate administrative division. Let’s have a look at the provinces and the capital city of Armenia.

Aragatsotn province is located in the western part of Armenia and has an area of 5455 km2. The population of the province is approximately 200.000 people. 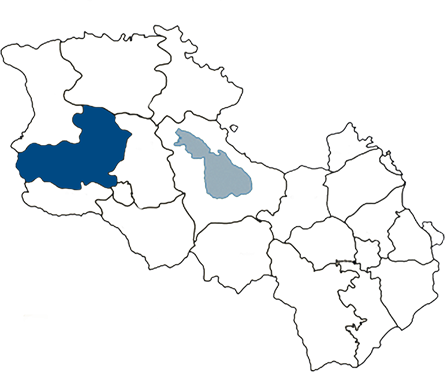 The meaning of the word Aragatsotn is “the foot of Aragats.” The reason for this is that the province is surrounded by mountains and one of these mountains is the highest one in Armenia called Aragats.

The area of Ararat province is 2090 km2 where approximately 260.000 people live. The region got its name after the Mount Ararat from the bible. 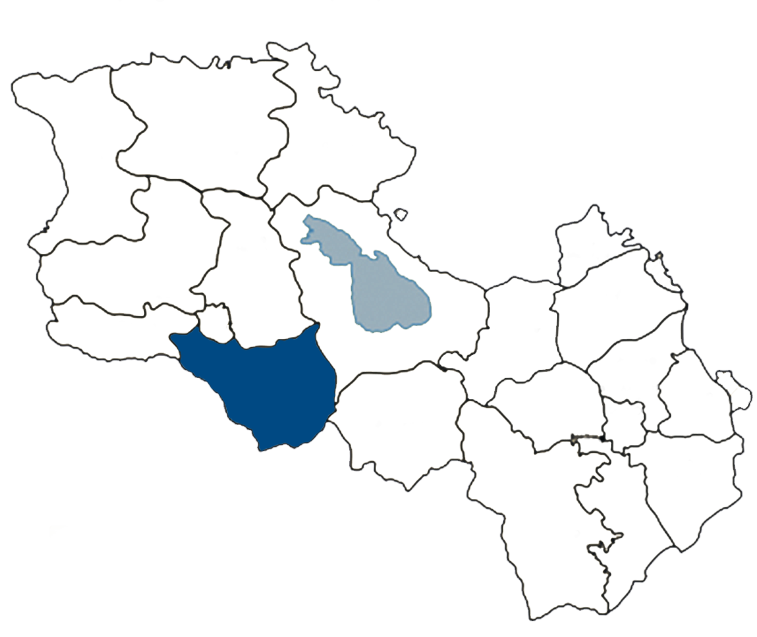 Previously the name of the province was Ayrarat. It was the central region of 15 provinces of Armenian Highland.

Armavir province has an area of 1242 km2 and an approximate population of 265.000 people. The province is the smallest in the country but is densely populated. 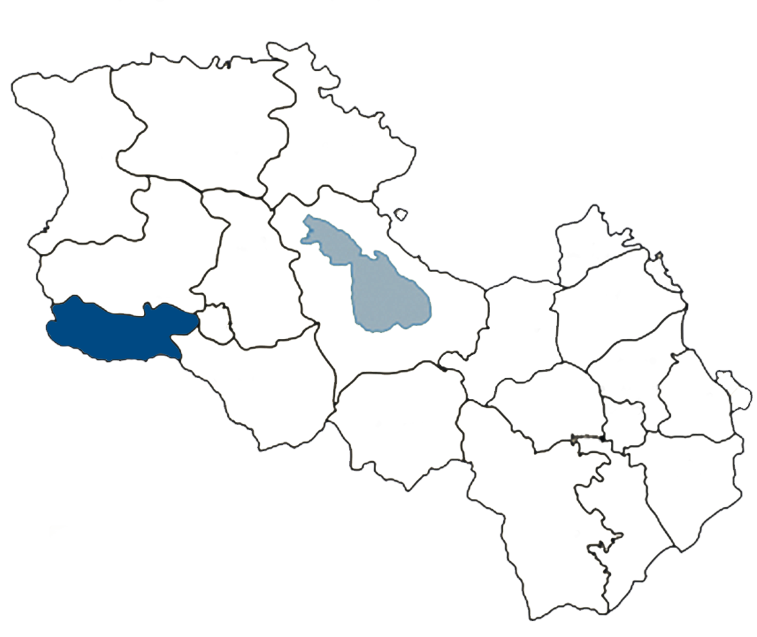 Armavir is very well known because of the spiritual center of Armenia - Echmiadzin. The historical Armavir was located between Aragats and Ararat mountains.

When you look at Armenia's map, immediately you will see the blue-eyed beauty Sevan Lake which locates in Gegharkunik region. It is the largest province in Armenia with its area of 5349 km2. A big proportion of the area of the province (1278 km2) is covered by the largest lake in Transcaucasia- Sevan. The approximate number of people living there is 235.000. 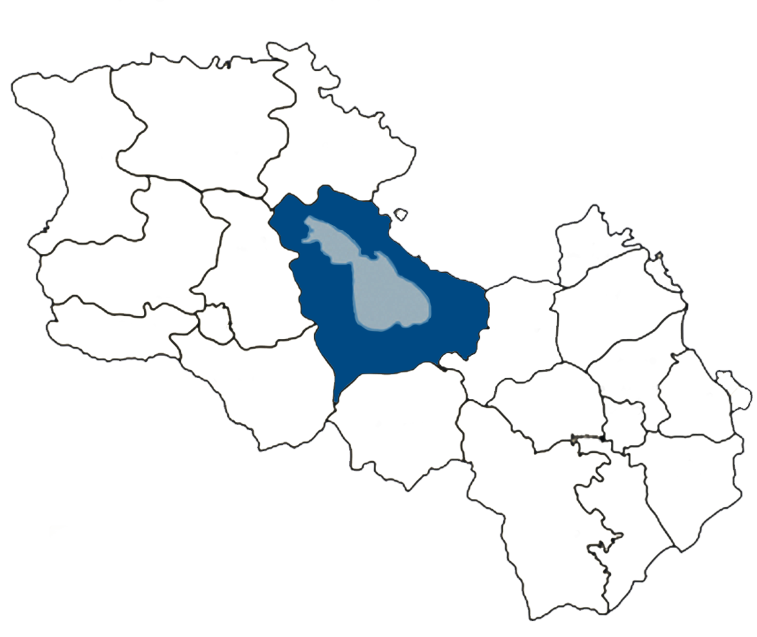 Gegharkunik name was chosen for the name of the founder of Armenian nation Hayk- Gegham.

Kotayk province has an area of 2089 km2 and a population of approximately 254.000 people. It is the only region that has no border with any country. 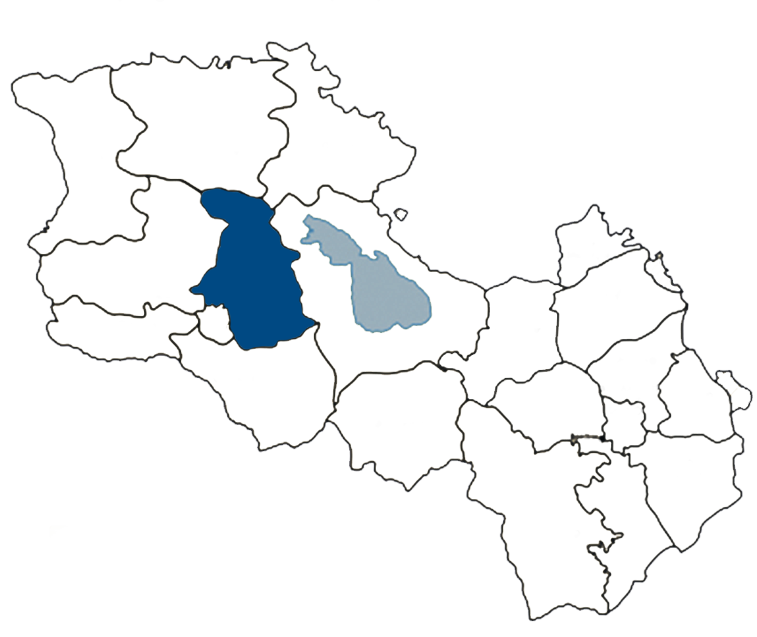 Kotayk is very well known for the ancient monuments Garni’s pagan temple, and Geghard dug situated there. Kotayk used to be part of the previously mentioned Ayrarat region.

Lori province is situated in the northern part of Armenia and has borders with Georgia. It has an area of 3799 km2 and an approximate population of 235.000 people. 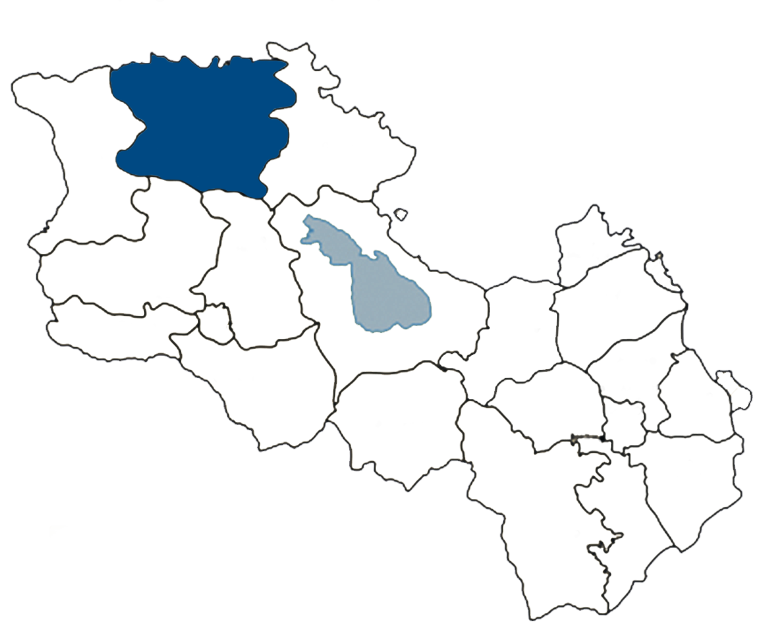 Lori is well known for Haghpat and Sanahin monasteries located in the province. Four Armenian rivers- Debet, Dzoraget, Pambak, Aghstev cross the area of the province.

As Shirak province is situated in the northwest part of Armenia, it has borders with two neighboring countries- Georgia and Turkey. The area of the province is 2680 km2, and the approximate population number is 252.000. 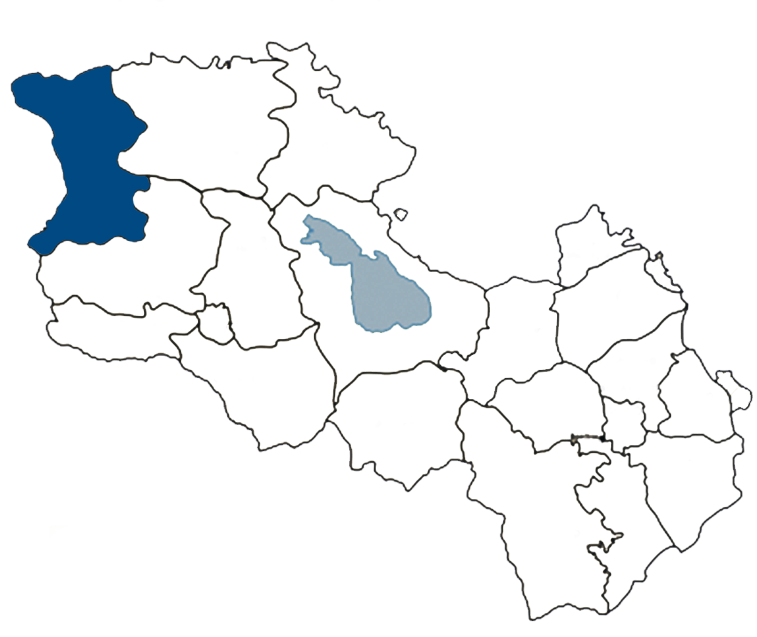 In the Shirak region, you can learn a lot about the architecture of Armenia as there are many ancient monuments such as ruins of castles, bridges, fortresses.

Syunik province is located in the southern part of Armenia and has borders with Azerbaijan, Iran, and Artsakh. The province has an area of 4506 km2 and a population of approximately 142.000 people. 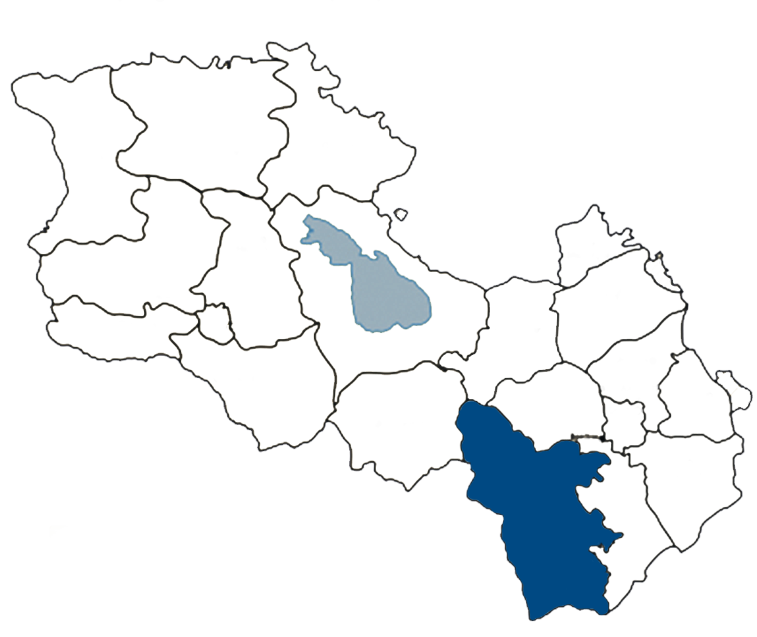 Syunik is known as the richest industrial center of Armenia. One of the oldest monasteries of Armenia - Tatev monastery is located in Syunik.

Tavush province is situated in the north-eastern part of Armenia and has an area of 2704 km2. The province has borders with two neighboring countries- Georgia from the north and Azerbaijan from the est. The population of the province is approximately 129.000 people. 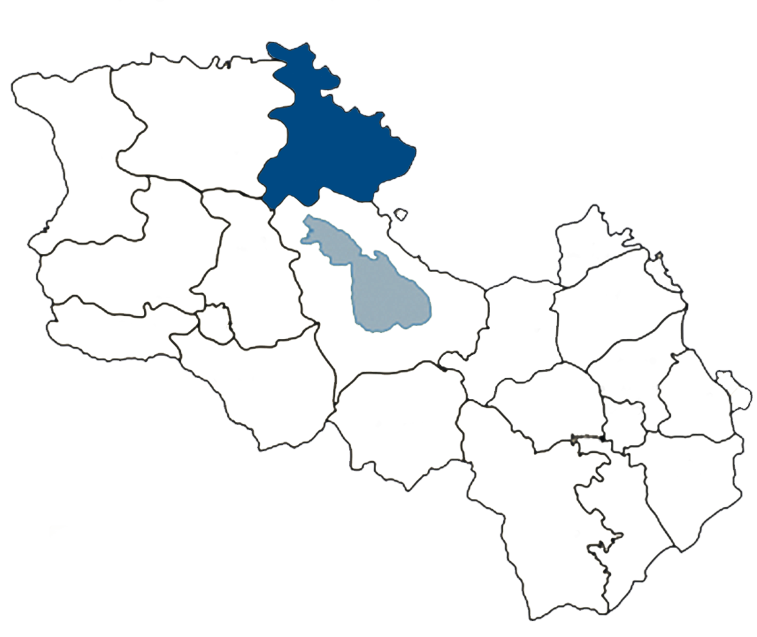 The province has a very beautiful nature. One of the most beautiful places in the region is Parz Lake which is the most popular lake in Tavush.

Vayots Dzor province is situated in the southeastern part of Armenia. Its area is 2308 km2, and the population is approximately 52.000 people. The border of the province is Nakhichevan from the west and Kalbajar District from the east.

The province is surrounded by various mountains and mountain chains. It has a beautiful nature with its rich fauna and flora.

Yerevan has been the capital of Armenia since 1918. It has a total area of 223 km2 and a population of 1.06 million people. The city was founded by Argishti first (782 BC) and is considered as one of the oldest cities in the world. 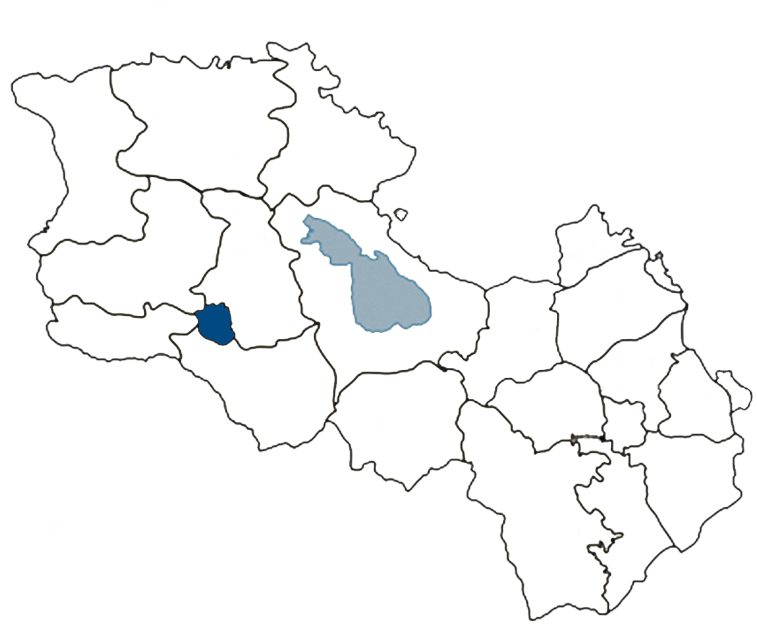 Yerevan is the administrative, cultural, economic and industrial center of Armenia.

Nightlife in Yerevan: 5+ clubs and pubs