Buildings and statues of Yerevan: the Colors of the pink city

To see a city is to know it, and Yerevan reveals itself through its colors. Perhaps no feature of Yerevan’s public face is more distinct and memorable than its architecture based on tuff, a volcanic rock native to this region of the world, which can be found in a variety of colors. The stately government buildings in Yerevan’s Republic Square are mosaics of differently-shaded blocks of rare pink tuff. This coloring of the tuff distinguishes Yerevan from other cities in Armenia, and indeed the world.

Depending on the angle of the sun Republic Square’s buildings may look more pink or more orange, but when the sun is low they become iridescent, with an ephemeral quality that is difficult to capture in photos. Just off the square, you can find rectangular buildings assembled from orderly rows of black tuff.

This architectural style signifies a building from late 19th- or early 20th-century Old Yerevan. Several such buildings played prominent roles in the fleeting era of the First Republic of Armenia just after World War I. Tuff architecture has a long history in Armenia, and most of the country’s medieval churches and monasteries are constructed from this colorful stone.

If you ascend the Yerevan Cascade, the white limestone steps built right into the hill overlooking Yerevan’s downtown from the north, the panoramic view reveals a calico city with pink and white and tan and gray buildings, red and gray roofs, stone and concrete. Sunrise and sunset give this patchwork of color a special sense of life. Off in the distance, blue-hued and snow-capped Mount Ararat always watches over the city. 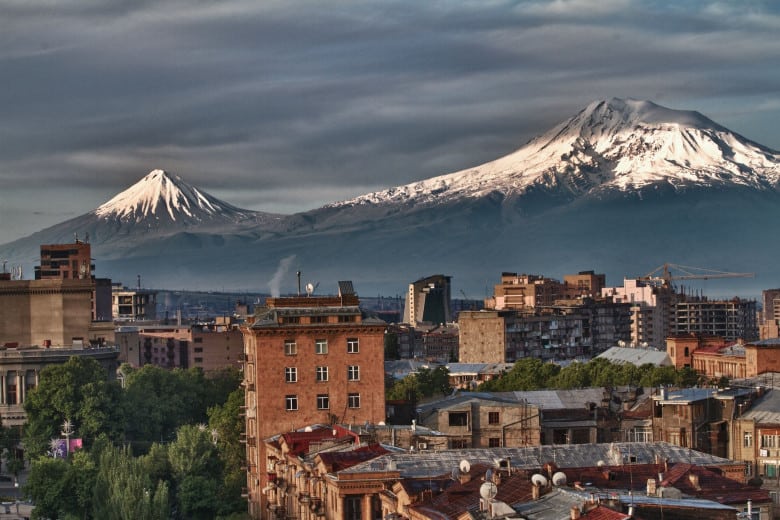 If from these heights you were to fly to the center of the city, you would see how this jumble of colors looks up close: old buildings and shops mixed with new commercial development and possibly one of the world’s best collections of cozy and trendy new cafes.

The descent from the Cascade reveals some of Yerevan’s metaphorical color: its distinctive statuary and other sculpture. All up and down the Cascade, below it and even underneath it, are contemporary sculptures from the Cafesjian Center for the Arts. Here you can find several works of the Colombian artist Fernando Botero, one of the “LOVE” sculptures by American artist Robert Indiana, and one of the hare sculptures by Welsh sculptor Barry Flanagan. 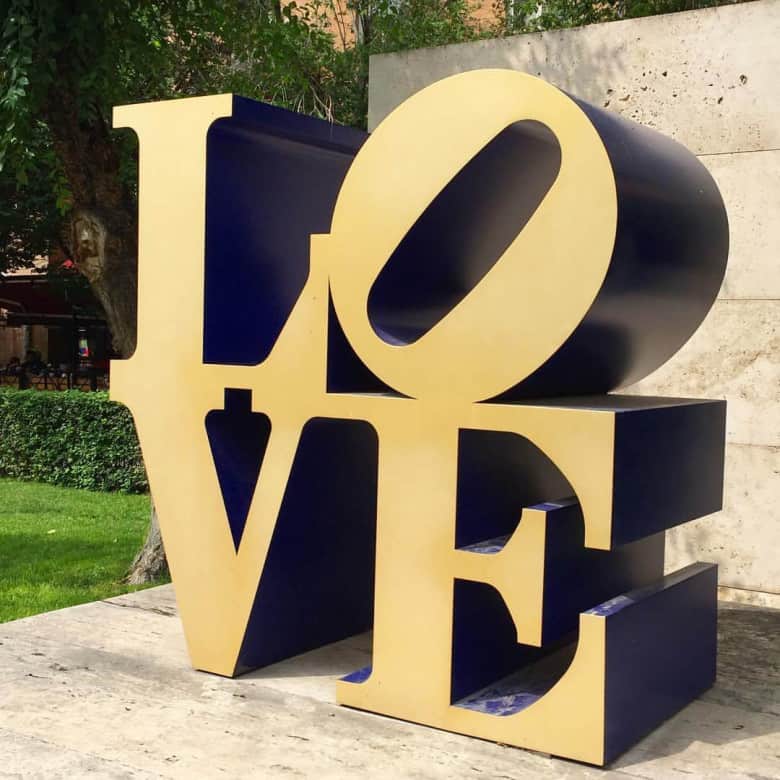 If you continue from the sculpture garden at the foot of the Cascade into the city center, you will be introduced to Yerevan’s remarkable public statues. You will first pass the imposing statue of the architect of modern Yerevan, Alexander Tamanian, who pores intently over a plan of the city. 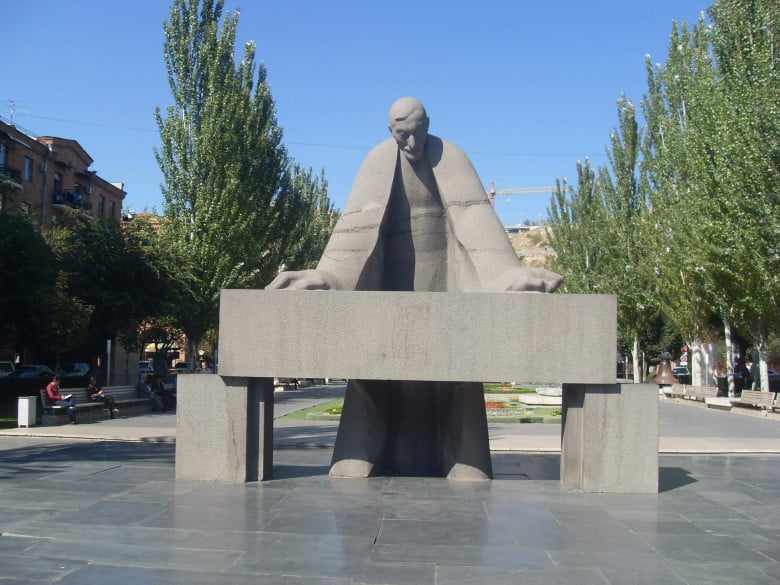 Immediately surrounding the Opera House are traditional sculptures of Armenian artistic luminaries such as composers Aram Khachaturian and Alexander Spendiaryan, and the poet Hovhannes Tumanyan. 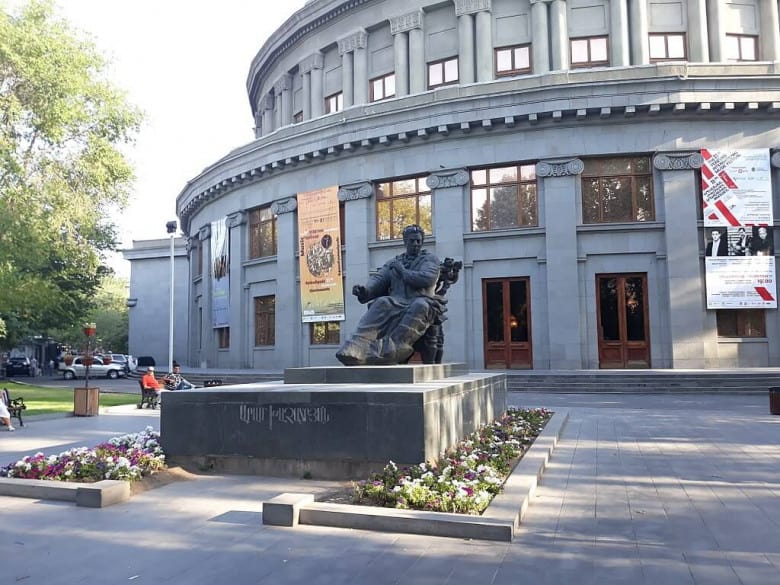 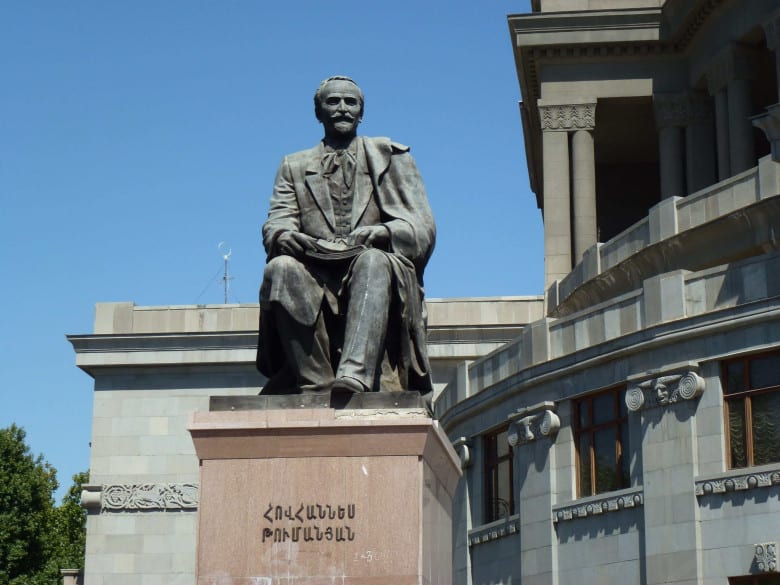 At nearby Swan Lake, however, the statuary becomes more light-hearted, where a caricature of composer Arno Babajanian gestures with flair as he sits at his piano. 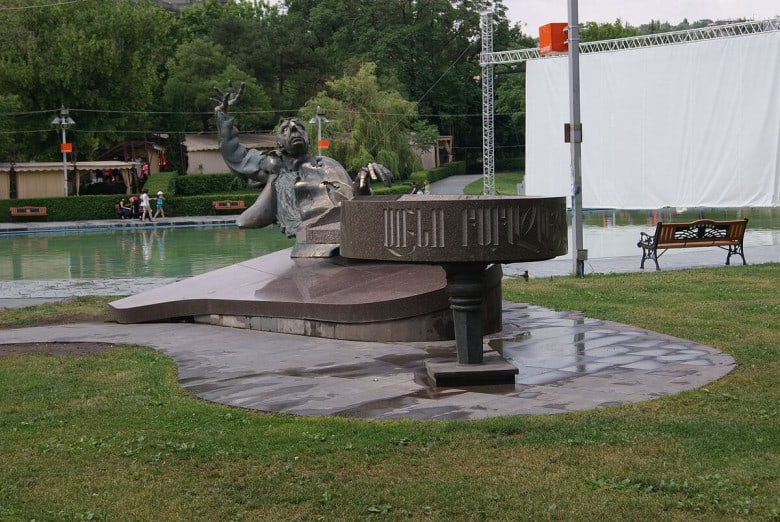 Just northeast of the Opera House you can find a statue of priest and composer Komitas, whose late 19th- and early 20th-century musical compositions captured the spirit of the Armenian people. Here Komitas sits in dignified but tormented repose on a fallen tree. 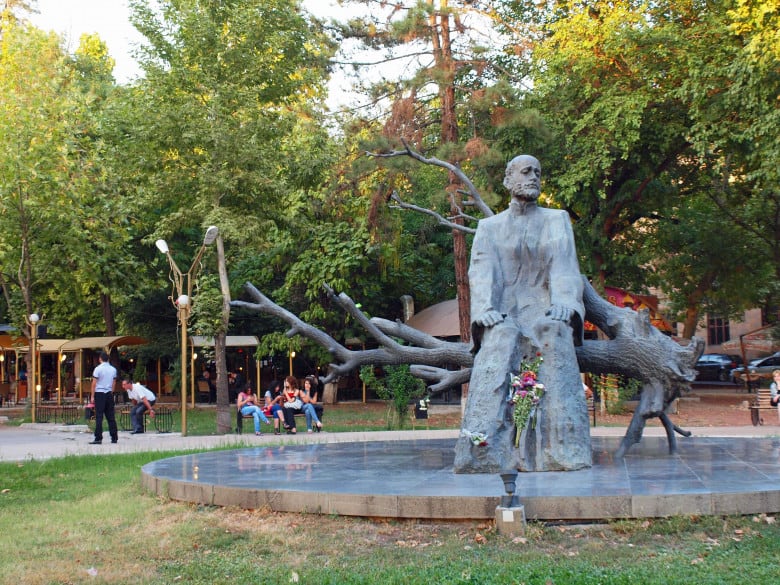 In Saryan Park northwest of the Opera House, you can see the four beloved protagonists of the 1972 Armenian comedy film “The Men” gathered to hatch some humorous scheme. 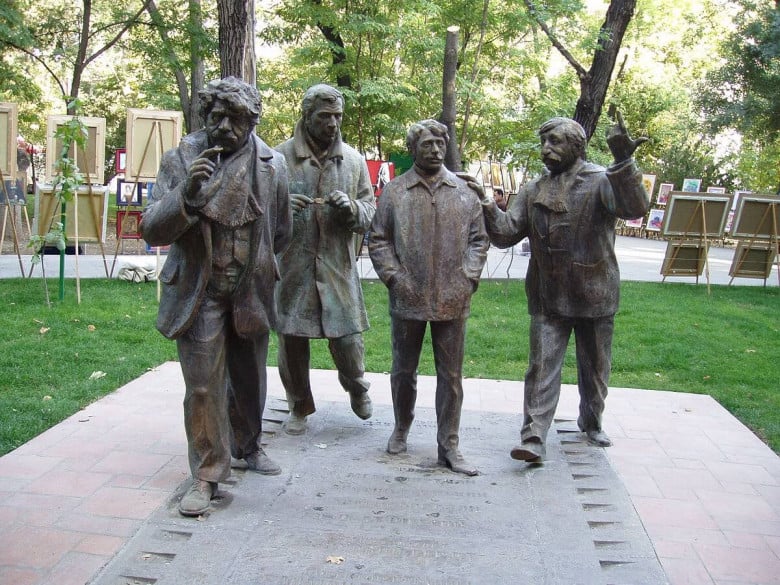 The abstract and classical statues by Armenian artist Yervand Kochar decorate some of the most-trafficked sites of the city. These include the equestrian statues of legendary Armenian hero David of Sassoun at the Yerevan Train Station and Armenian hero St. Vardan across the street from Yerevan’s outdoor bazaar, the Vernissage. 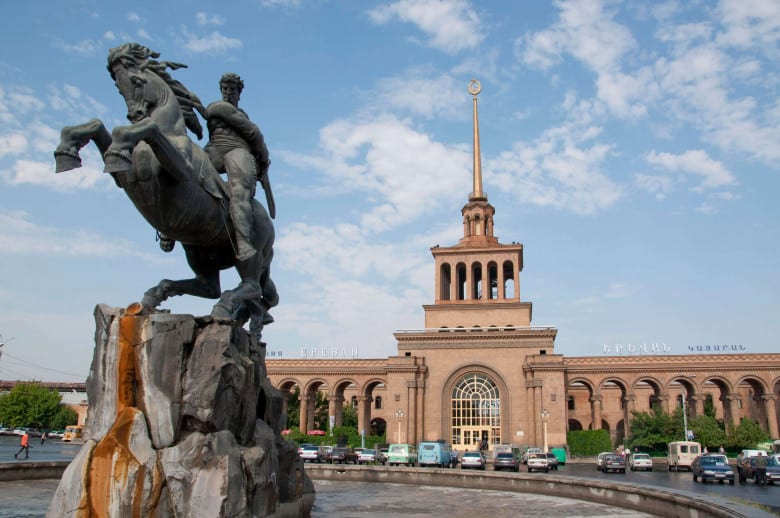 Also near the Vernissage is Kochar’s abstract and moody statue “Melancholy”. On Abovyan Street a giant metallic spider and guards the plaza in front of Yerevan’s Moscow Cinema, next to the fountain surrounded by depictions of all the signs of the zodiac. Before you leave Abovyan Street, however, you should visit the “Loves Me, Loves Me Not” statue of a winsome Armenian woman. Place a flower in her hand, so she knows that today she is loved, and not loved not.

On Mashtots Avenue two very different relics of Yerevan’s past sit across the street from each other, each with its own distinctive color. The Pak Shuka, Yerevan’s historic indoor bazaar built in 1952, is decorated with a golden façade of ornate, vaguely-oriental designs. Although the building now houses a modern grocery store, its exterior will take you back in time to one of Yerevan’s cherished landmarks. 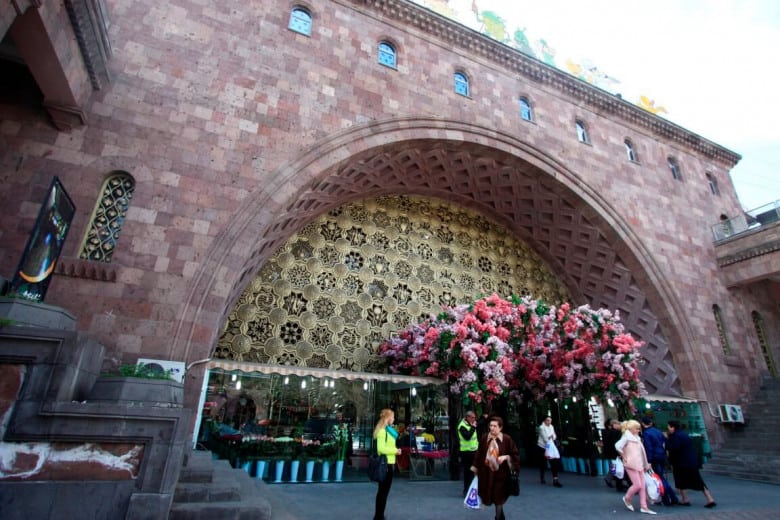 Across the street is the 18th-century Blue Mosque, modern Armenia’s only functioning mosque, which now serves Yerevan’s small Iranian community. Built of red brick, its intricately-decorated blue tile dome, minaret, and entrance give the mosque its name.

Finally, the color and character of Yerevan are shaped by the flow of the Hrazdan River, around whose gorge the city was built. The green and brown river gorge may be viewed from the rear of the museum of experimental Armenian film director Sergei Parajanov, near Hrazdan Stadium. 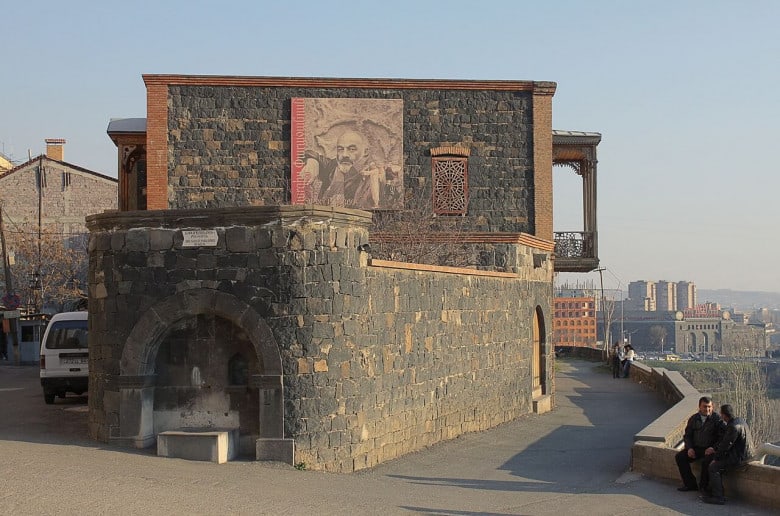 Just north of the museum is Yerevan’s Kond district, a warren of narrow streets and small stone buildings. This insular enclave within the modern city was founded some 400 years ago, making it one of the oldest districts of Old Yerevan. Across the river from Kond rises the spire of the Armenian Genocide Memorial at Tsitsernakaberd (literally “The Swallow’s Fortress”, after an old fortification there). At this site, where Armenian history meets the Armenian spirit, an eternal flame stands to mark the past . . . but it always adapts to the blowing winds. 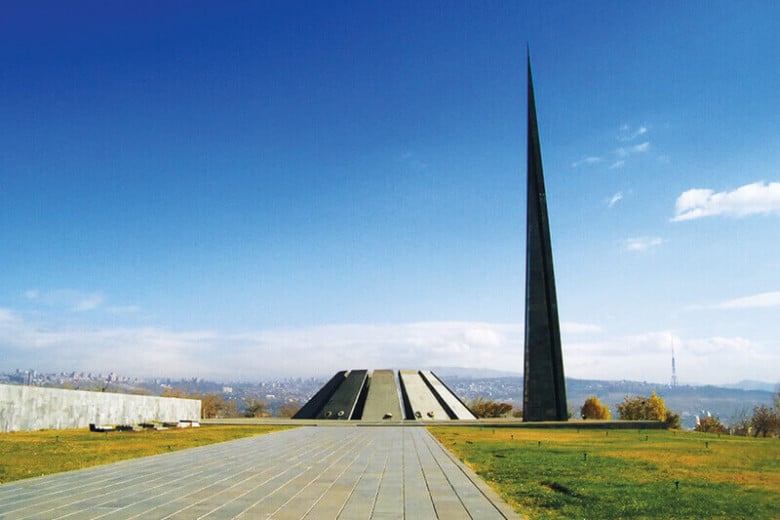 From the hill of Tsitsernakaberd you can take in a sunset view of Yerevan and the hills beyond, bathed in golden sunlight as the Hrazdan River below flows gently toward Mount Ararat.