Having been in Yerevan for more than two weeks now, I would like to share some stories that illustrate what I’ve learned about the Armenian people as an American tourist. During my time here I’ve experienced first-hand how Armenians treat foreign tourists, and I’ve observed how they treat each other. The traits I’ve seen again and again are hospitality, helpfulness, and friendliness toward those in need, and curiosity about strangers.

Let me first tell you about how Armenians treat each other so that you can understand what kind of society you will be entering when you come here. The best example I can give is the night I saw a woman on the street who had lost her son and couldn’t find him. It was Armenian Independence Day here in Yerevan, and crowds were milling about Freedom Square near the Opera House. 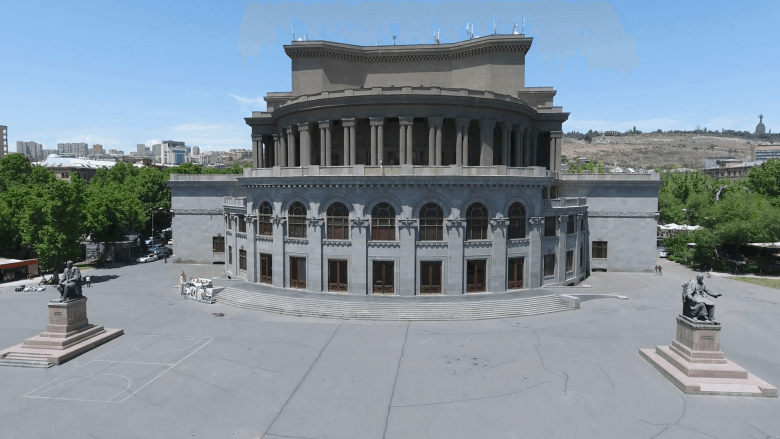 I saw ahead of me a woman waving her arms and crying out. In no less than 5–10 seconds there were already 15 people surrounding her, mostly young men. As she was wailing and gesturing I came to understand that she had lost her child somewhere nearby and was describing his appearance.

Several of the men immediately fanned out to search for him while another woman starting calling out the boy's name. Several other men brought the mother to a nearby policeman, who started coordinating the search. Meanwhile, the crowd around the woman grew to 40 people or more. The police scarcely had time to act when a man behind me called out that they had found the boy.

They brought him over to her and, during the reunion, another woman brought a cup of water to soothe the crying mother. The whole episode couldn't have lasted more than three minutes. It was amazing. Armenia is a small country with a tightly-knit society that has seen some hard times. I think that in such an environment, everybody has to help each other out to get by.

This Armenian communal spirit is extended to foreigners as well, sometimes just in small ways. I recently boarded one of the public buses, which during the morning rush hour was standing-room-only. I was carrying a couple of bags that made standing a bit awkward. Although I could have managed to hold one of the overhead railings with one hand, an elderly grandmother who was sitting next to me immediately gestured for me to let her keep one of my bags on her lap during the trip. I later saw her rise partway out of her seat to assist a mother and her young son into the seat beside her. Several times in Armenia I’ve had people offer to help me with items that looked heavy or awkward to carry.

P.S. So, if you happen to be in Marshutka with heavy bags and notice someone asks you to hold one of your bags, don't worry, they don't want to steal your bag. Just a kind act. 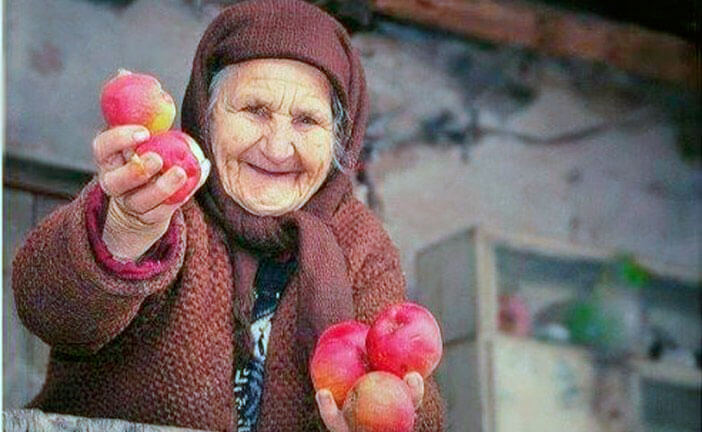 If you strike up a conversation with a stranger in Armenia – or perhaps they will strike up a conversation with you – there’s a good chance they’ll fairly quickly offer you some coffee, tea, soda, juice, or water if they happen to be near their home or place of business. While staying in Yerevan I’ve had both the owner of the Silk Road Hotel and the owner of the Megerian Carpet Factory and Museum offer me refreshments after just half a minute of conversation.

During a visit to Sasunik village in Aragatsotn Province, a man on the street stopped me to ask where I was from. After just a minute of conversation, he invited me to his house for soda or water, so I sat with him on his porch drinking water and talking about Armenia. I recommend taking advantage of such opportunities to talk with strangers here.

Quite a few of them have good English skills, especially in the cities, and you can learn a lot about Armenia and its people through friendly 5–10 minute chats. As a foreign tourist in Armenia, you may find people looking at you on the street. They may not be smiling. This can be somewhat uncomfortable for an American if you don’t understand the sociology behind it. What may seem like suspicion is almost always just curiosity.

Since Armenia is a small country where everybody seems to know everybody, people want to know what their fellow citizens are up to. Foreigners especially attract interest: sometimes just a fleeting look, sometimes an invitation to chat. Smiles mostly seem to be reserved for people Armenians have talked with and gotten to know a little, not for perfect strangers, so a lack of a smile is not an indication of unfriendliness. A friendly and open-minded discussion will usually rapidly dissolve the social barrier, however, so it’s easy here to meet as strangers but part with smiles.

Lessons that I learned about Armenian people

I tested some of the lessons I learned about the Armenian people while visiting the district of Kond in Yerevan.A city-within-a-city, Kond was founded several centuries ago as one of the original quarters of Old Yerevan. I was told that Kond is a quite insular neighborhood – the type of place people don’t tend to visit unless they live or have business there and that the locals, while friendly, would be very aware of outsiders and curious about them.

I wanted to get a feel for the lifestyle among the crowded, crumbling buildings of the old quarter, so I wandered up and down the streets of Kond for a couple of hours. As an obvious foreigner, people did notice me, but no one seemed to be disturbed my presence or asked me anything. One or two people watched me carefully, but I just looked back and gave a small smile.

While in Kond I looked for the ruins of an old 17th-century mosque that I had read about, but I was not able to identify it. I eventually asked some young boys about it by showing them a photo of the ruins on my phone.They didn’t speak English, but one of them offered to take me there.

Along the way he was typing things into the tablet computer he was carrying. He was using Google Translate to ask me where I was from and how I was enjoying Kond. I managed to communicate the answers “America” and “great!” to him. We finally reached the ruins on the east side of Rustaveli Street where it meets Simeon Yerevantsi Street.

My guide knocked on a door that led to a courtyard where two men were playing nardi, Armenian backgammon. He asked them if I could take a photo of the mosque’s collapsed dome that was visible from their courtyard, and they gave their minimalist assent. I took a photo and thanked my guide as we left, upon which he said “goodbye!” and dashed off up the street. 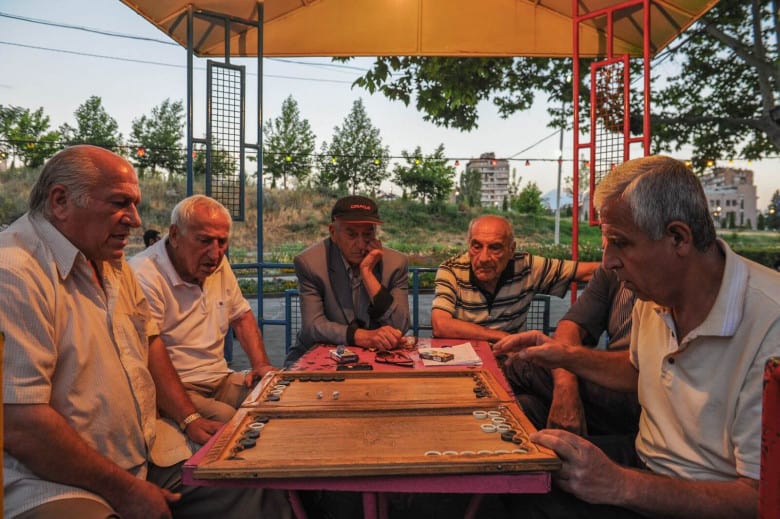 I will end with some tips for getting the most out of your meetings with Armenians. First, accept their hospitality! They want to help you and make you feel comfortable, so let them. If you ever feel out of place or feel that you might have committed a cultural faux pas, a smile can get you through many situations here.

Don’t overdo it, since a big smile sometimes might be too much coming from a stranger. Just give them a little knowing smile, to show that we’re all just trying to get by together. Don’t be afraid of chatting with strangers. You’ll learn something and it’s usually not hard to extricate from conversation if you need to leave.

When talking with Armenians, it goes a long way to show a little curiosity about their country and culture. They also enjoy it when you show a little knowledge about Armenia, but spend more time listening to what they tell you. Tell them a little about where you come from too, especially if they haven’t visited there themselves.

But above all, tell them what you like about Armenia and its people! Armenians are rightfully immensely proud of their country and its long history, so they always seem touched when someone from abroad shares a little bit of that pride. You might just make a new friend that way.

Tours in Armenia. What can we offer for active and passive rest lovers?

Nightlife in Yerevan: 5+ clubs and pubs