Mata Hari once said, “The dance is a poem of which each movement is a word.” From the beginning of their journey Armenians went through various difficulties and overcame them without losing their nationality.

A great way to prove this is Armenian National Dances which are one of the oldest ones in the area of Caucasus. They reflect the entire story of the country by making one the part of it. When watching these dances, you feel like reading a poem about the history of Armenia. By dancing them yourself, you feel what Armenians felt- all the struggles during wars, strong belief in God, enormous power, love toward the country and family and happiness of the victory.

Now, let’s have a look on some of the Armenian National Dances that reflect the culture of the country.

Kochari is a very well-known dance in Armenia. It is a category of dance, and each region dances it with its individual style (different moves and music). The word Kochari means “knee, come” (Koch- knee, ari-come). John Blacking in one of his books mentioned: “Group dancing, when dancers imitate jumping goats, is known as kochari. Dancers stand abreast, holding each other's hands, The tempo of the dance ranges from moderate to fast. Squatting and butting an imagined opponent are followed by high jumps.”

Martial dances are also very common in Armenia. One of the most popular ones is called Yarkhushta, originated from historical Armenian region Sasun. It is from a category of Armenian “clap dances.” The most important part of the dance is when dancers who are facing each other clap onto the palms of each other. Traditionally soldiers were dancing Yarkhushta before the war to feel more powerful and to awake the battle spirit in them.

Another well-known Armenian martial dance is called Berd. The dance originated from an old Armenian city called Vaspurakan. In the beginning, this was a game called Gmbetakhagh when people were making a fortress by standing on each other’s shoulders. After some time, the game transferred into a dance. The dancers are usually men who show the process of building a wall for the defense of territories during the battle.

Uzundara or Bride’s dance is Armenian national, lyrical dance. It has originated in the valley between Agdam and Prishib villages in Karabagh. The word “Uzundara” means a long valley. It is very common to dance Uzundara during Armenian weddings, that is why very often people call it Bride’s dance. The bride either dances alone or with a group of other girls.

In the Uzundara dance, girls make various snakelike moves by using their hands and body. The reason for this is that in Armenian mythology it is said that there was a snake that had four heads each of which embodied a country. One of his not venomous heads represented Armenia. The second one represented a friendly nation. The other two heads were poisonous and represented enemies. By making snakelike moves, women distracted the snake’s poisonous heads. The dance reflects the fighting spirit of Armenian women and the fact that they are ready to fight with men to protect their country. 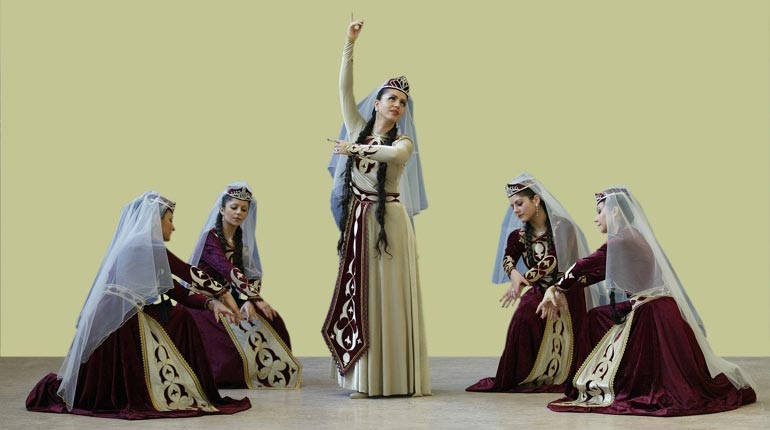 One of the most famous and energetic Armenian dances is called Shalakho. There are different versions of the dance, but the most spread one is where two men dance-fight to win the heart of their loved woman.

Nowadays, both men and women dance Shalakho during various events in Armenia. Women have slow and lyrical moves as in the most Armenian dances. Men’s moves are very different from women’s ones. They dance faster and more energetically.

Shavali was a compulsory wedding dance in Armenia which was originated in Karno province. The dance was also called Dance of In-laws' as either bride’s or groom’s parents danced it during the wedding.

Now the dancers of Shavali are both men and women of middle ages. If just women dance Shavali, the dance looks like “Uzundara.” The moves of the dance are exquisite and very tender.

Ververi or Ver-ver is an Armenian group dance. The dance consists of two parts. The beginning of the song has a slow tempo. After some time, the tempo changes and gets faster. The word “Ver” in Armenian means up, and the word “Ververi” means go up and up. Previously the dance was called “Vernapar” the meaning of which is “a dance to up.”

The dancers usually were young and strong men. They were jumping very high by teaching children they needed to grow up and to be strong to protect their country. Also, in Armenian mythology, it is said that this dance would change the entire way of living for all the existing species in the world (including human beings and animals).

If you ever visit Armenia don’t lose your opportunity to dance our national dances. By the way, you can even wear Taraz and feel the Armenians’ spirit at its most. We can guarantee that the emotions you’ll get here will stay with you for a long time.