On 27th September 2020, the morning wasn’t good. Early in the morning, Azerbaijan unleashed a military offensive along with the border of Artsakh targeting also civilian settlements including the capital Stepanakert. As a result of the shelling, a woman and a child were killed. 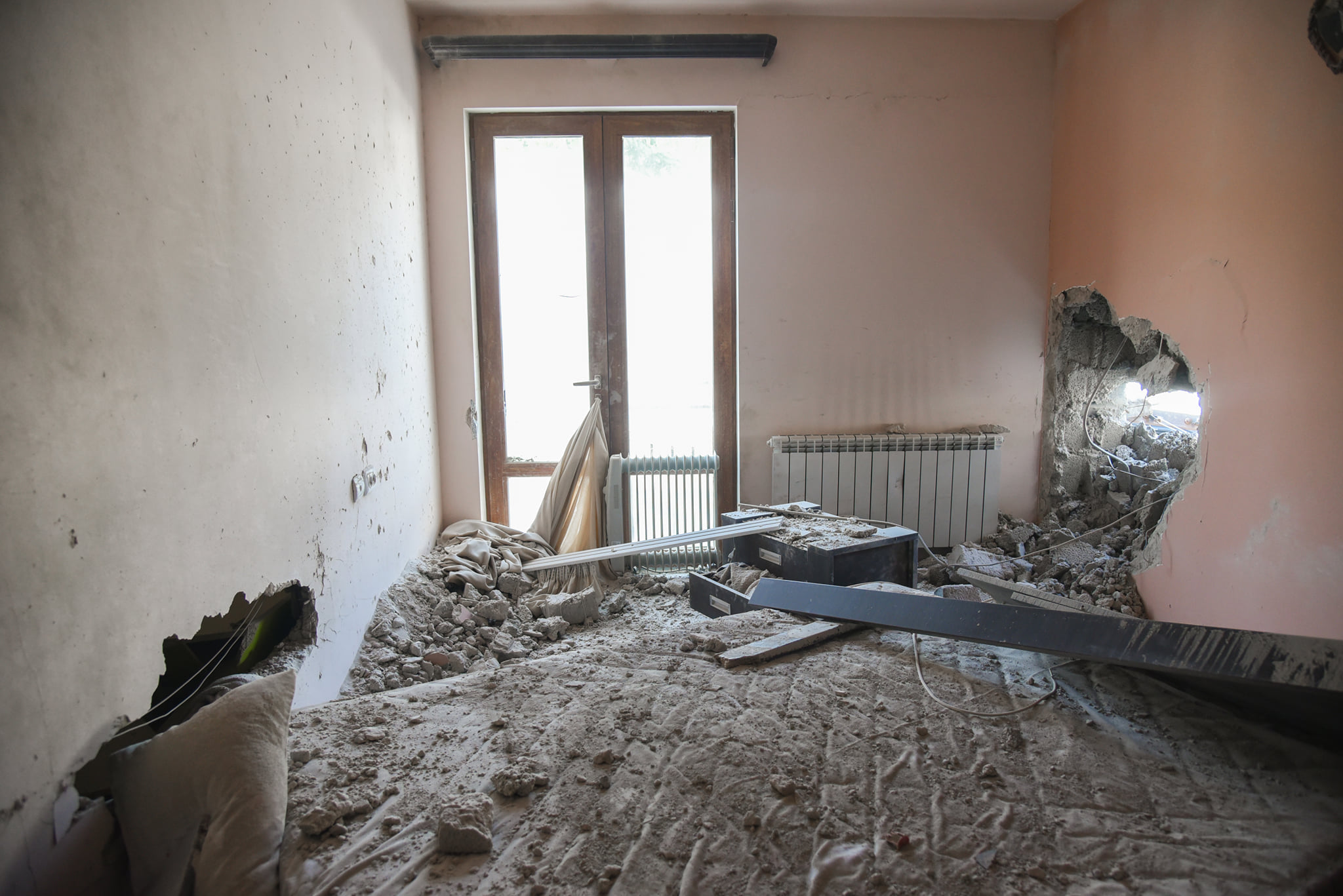 As we know Artsakh (also known as Nagorno Karabakh) is an integral part of historic Armenia. The territory is populated with Armenians, and our nation considers it as a homeland. Although Artsakh is considered to be an independent region, this is the territory where Armenian soldiers fight against the Azeri aggression in order to maintain their piece of land, their culture, religion, and identity.

A similar situation was in Artsakh in April 2016․ And again the situation was awful on July 2020 in the Armenian Azerbaijanian border. This isn’t a war. This is aggression towards peaceful civilians. And which is against the international policies.

Not only Azerbaijan but also Turkey is battling against us

The president of Artsakh - Arayik Harutyunyan commented: “Not only Azerbaijan but also Turkey is battling against us. They use available modern weapons and ammunition of the Turkish army: drones and planes. F-16s, which have been in Azerbaijan under the title of regular military exercises for over a month, have been used since this morning up until now.”

This isn’t the first time that Azerbaijan and Turkey attacked the Armenian nation. "Just when World War I started, Turkey started the Armenian Genocide. When the Soviets entered Armenia, through negotiations with Turkey, Stalin passed the 95% Armenian populated province of Nagorno Karabakh with Armenian Christian heritage dating back the 4th century to Azerbaijan, Turkey satellite state. When there was an earthquake in Armenia in 1988, Azerbaijan started the ethnic cleansing of Armenians with a firm defense response. Now when there is pandemic, Turkey sends 4000 Syrian jihadist fighters to join Azeris to attack the people in Nagorno Karabakh. 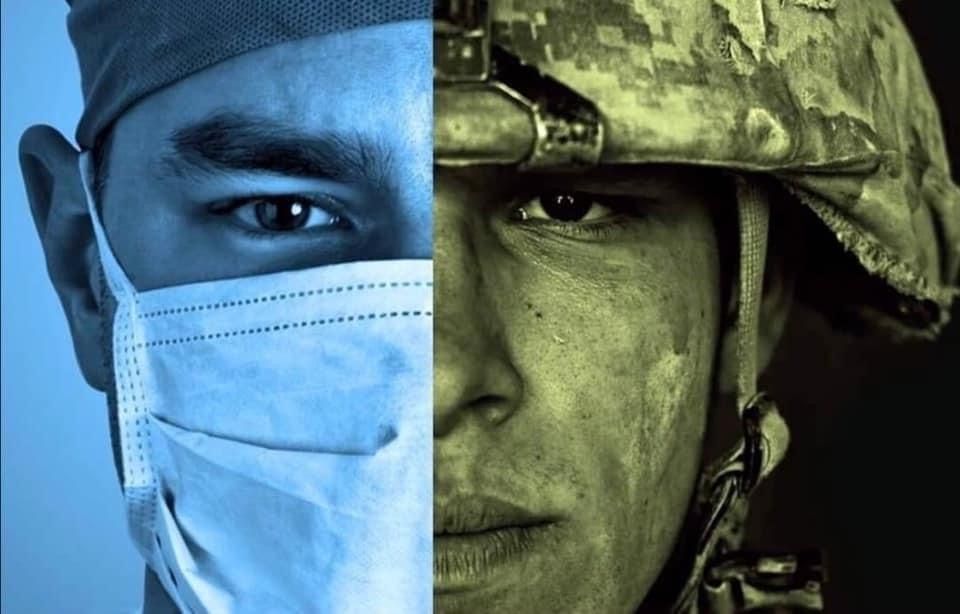 What they don’t understand, what they will never understand is that in the times when we are at our lowest, be an earthquake or pandemic, we get united as never before."

In such difficult situations, the Armenian army is always ready to resist and throwback the enemies. Although the military situation is announced and there is a mobilization, many volunteers don’t wait and join the national army forces. Mothers send their sons, sisters - their brothers, women - their husbands, girls - their lovers, grandmas - their sons and grandsons. This once more proves the love and devotion of Armenians towards their motherland and national identity. 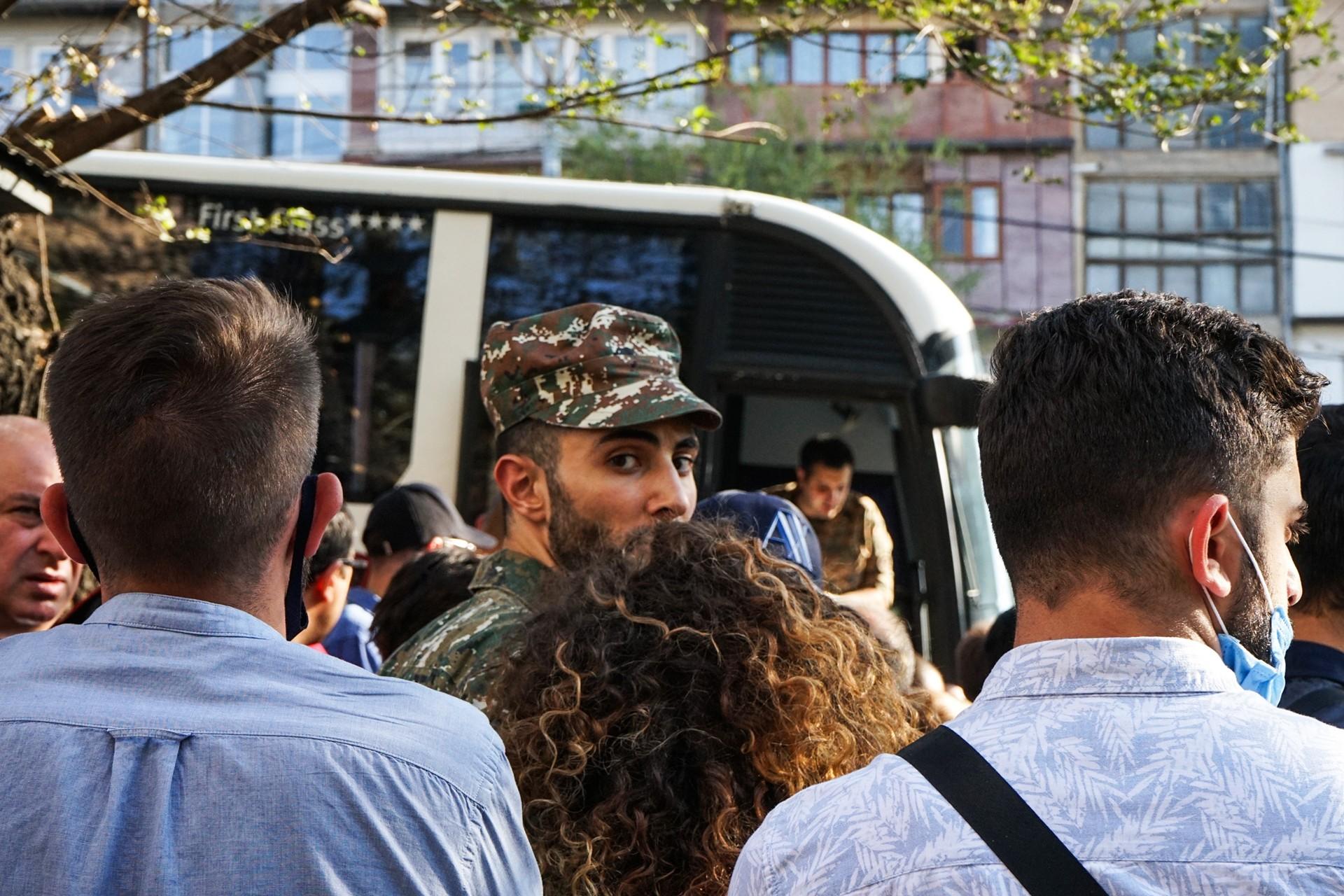 What Fake News They Spread

A few days ago, Aliev - the president of Azerbaijan, said that Armenia was getting ready for a war. However, it was they who received Turkish ammunition and help as if it was a regular military exercise. Besides, as the president of Artsakh noticed, if we pay attention to the ammunition used by both sides we'll see that the Armenian side used defensive armored vehicles while the Turks used offensive ones. So, who started aggression?

Erdogan - the president of Turkey presented the situation as if it was Armenia who attacked. And he once more accepted that the Turkish nation supports its Azerbaijani brothers with all their opportunities.

This war is planned for a long time. All the military commentators and professionals accept it. Our neighbors have banned all the social media channels and try to miss the correct information out. They speak about some occupied territories. All this information is fake and doesn't match the reality.

Currently, battles of varying intensity continue, accompanied by artillery training on the part of the enemy. Armenian forces successfully destroyed the enemy's armaments. 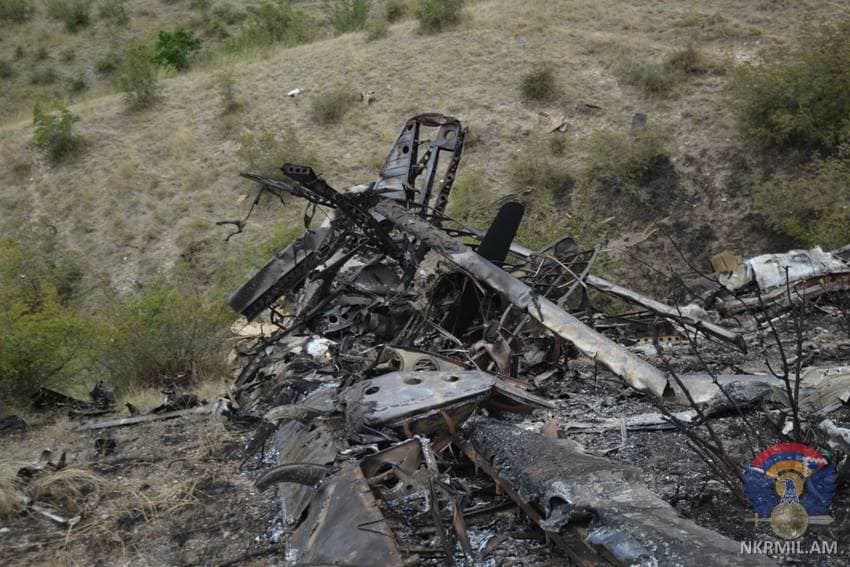 Armenians come up with the slogan “We Will Win” (“Հաղթելու ենք”), #ArtsakhStrong, #StopAzerbaijaniAggression, #StopAliev. The statue of Mother Armenia that is situated in the Victory Park is illuminated with the Artsakh flag and hashtags. And every Armenian believe that we will win and our brothers will return back to their families. Many soldiers have died for this piece of land. Our ancestors have fight for the independence of this nation and we have no other desire than to keep our motherland. This is the land for which 3 generations fight for: the son, father, and grandfather. This isn’t merely a piece of earth, this is our nationality, our culture, and identity. And we’ll force the enemy to keep the peace. 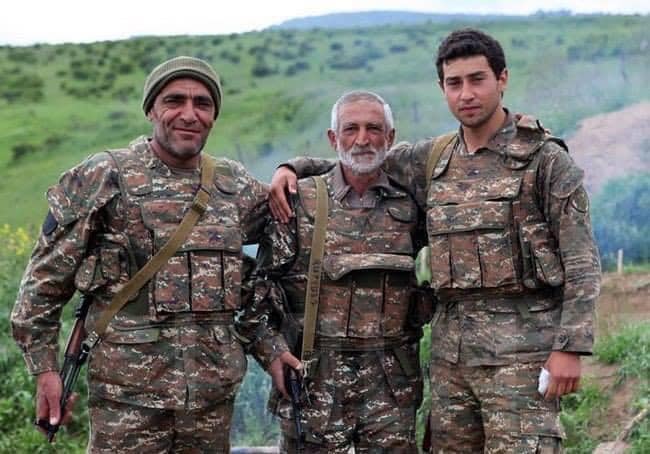 The son, father, and grandfather 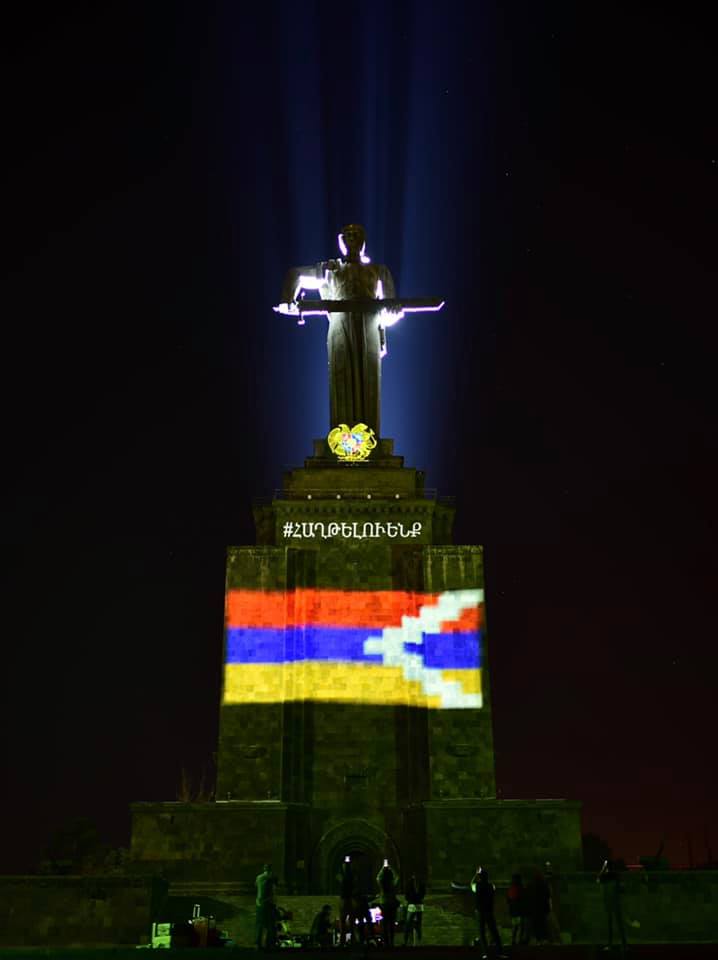 Look at the below-attached photo 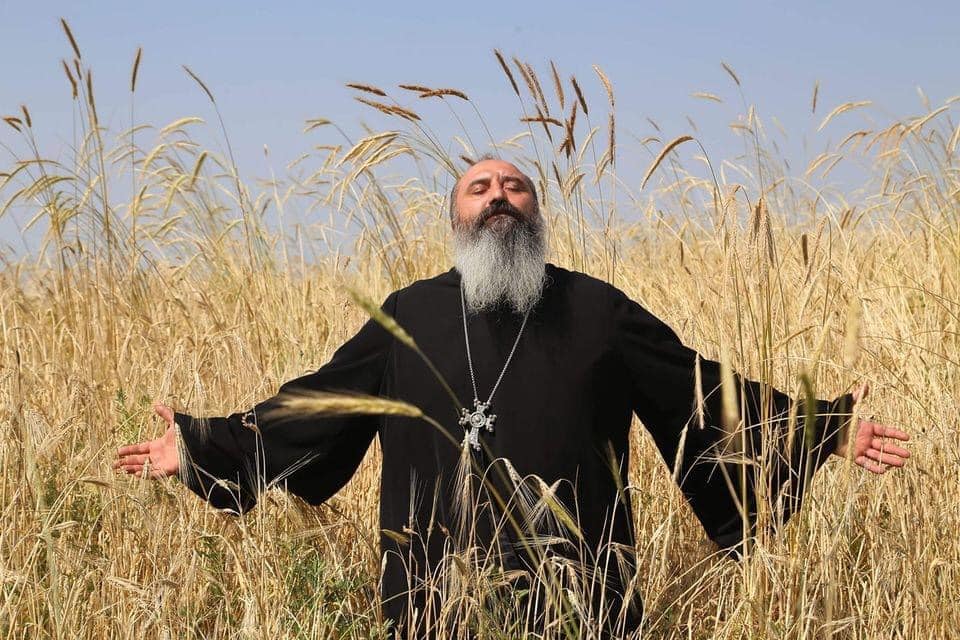 Ter Abel - the priest at the village of Movses notes: "Looking into the soldiers' eyes I guess they love their homeland more than I believe in God".  This is a border village in the Tavush region. So, who may defeat this nation?