When you ask a tourist: "What was one of the most memorable places you visited in Armenia?"--the answer would likely be: "Tatev monastery". One reason for this might be exciting, or should we say thrilling, ride on the Wings of Tatev cableway to get to the historic monastery.

Well, in 2012, only two years after the opening of the Tatev cableway, another equally electrifying and memorable journey was created for you in the scenic Syunik Region. Only 30 kilometers from Tatev, a suspension bridge connects old Khndzoresk with new Khndzoresk. As you read on, you will realize that this is not an ordinary bridge nor is it an ordinary village!

The bridge was inspired by a local entrepreneur's passion to showcase a truly unique Armenian village. His goal was to preserve the village's past, and, for future generations to discover their roots. The suspension bridge is a work of love by the people of the village. It was built by the villagers with their own hands, and horses, without modern machinery. It spans 160 meters across the most rugged, yet scenic gorge one could imagine. It's worth stopping along the way to catch your breath and take amazing pictures of the cliffside dwellings.

That's right, people lived on these cliffs for many centuries. It wasn't until the mid-twentieth century that Soviet officials declared the caves uncivilized and forced the villagers to relocate themselves. Many villagers relocated to new Khndzoresk or moved elsewhere. The caves or krataker are naturally formed and man-made. 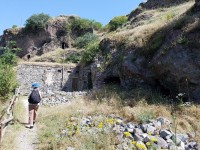 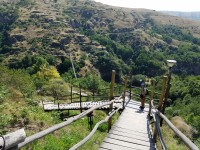 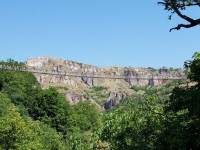 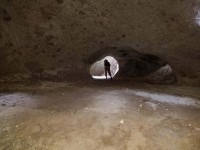 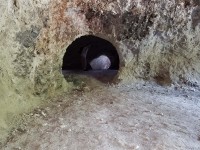 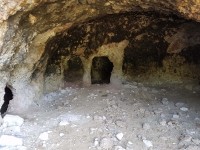 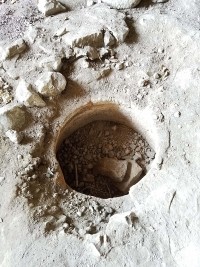 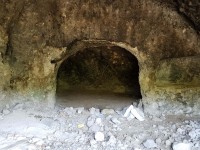 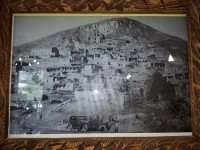 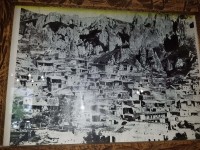 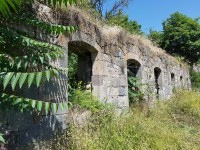 This settlement has occupied this rocky canyon with its conical rocks since the 13th century. They have quite spacious rooms (cavities) often with adjoining rooms. They often had ovens (tonir) for baking lavash. Many dwellings had porches that jutted out from the cliffside. You can't help but to notice the wonderful cool air when you step out of the hot sun into the cave.

Now let's try to imagine what the old Khndzoresk cave village was like during its height of activity. There are estimates that suggest that the population grew to 15,000 people living on this steep gorge. Many of these dwellings were carved out over and around each other. A complex system of ropes and ladders were required for people to reach one another within the community. At its height, the village had two churches and three schools. Old Khndzoresk existed in this form until the twentieth century.

Now, thanks to the suspension bridge that the community built, tourists and locals alike can access this amazing historical treasure. Vehicles can reach this site by following the Stepanakert Road east for about 6 kilometres. Drive past a sign saying “Welcome to Khndzoresk” in both Russian and Armenian.

After passing through the village, turn right down the dirt road to Old Khndzoresk. There is a parking area for cars and buses and there are a few shops selling drinks and snacks. You will need to take some refreshments with you if it's a hot day, because you will have to descend some 400 stairs before reaching the bridge.

Take your time, because this is an adventure well worth the time spent. You will never forget the thrill of standing on the middle of the bridge suspended so high above the river flowing below. You will feel the ripple-motion of each footstep rolling across the bridge with you.

After visiting Khndzoresk you should not miss the opportunity to visit the city of Goris. Hundreds of medieval cave-dwellings once occupied the surrounding cliffsides. While the residents had long since moved across the river to build more conventional homes. These abandoned caves are a visible reminder of the one-time thriving cliff dwelling community.

This is an example of architectural design incorporating Goris' cave heritage into a contemporary dwelling.

The Richest Armenians in the World