Do you think that such places are seen only in movies? Me too. For the first time, I knew about this cave from a film called “Kavaran” (Purgatory). This film was shooted in Levon’s Divine Underground. There are many many caves all around the world. And I won’t hold the open secret if I tell that caves are mysterious places. However, this cave covers much inside of its walls. It’s a mystic place recommended to visit. Do you want to know more before visiting? Come on!

How The Story Began?

It was back in 1985 when Tosya Gharibyan asked his husband - Levon Arakelyan, to dig a potato cellar beneath their house in Arinj. This is a village in the Kotayk Province located just on the north of Yerevan (15-20 minutes of a ride). Of course, Levon couldn’t reject his wife. He created a small cellar. Yet, this small task became a great adventure in his life.

Once he started carving he couldn’t stop until the Levon’s Divine Underground (Levoni Astvatsayin Getnapor) was complete. The wife tells that Lyova (Levon) Arakelyan - his 44-year-old husband, was motivated by his visions where a voice told him to continue digging. 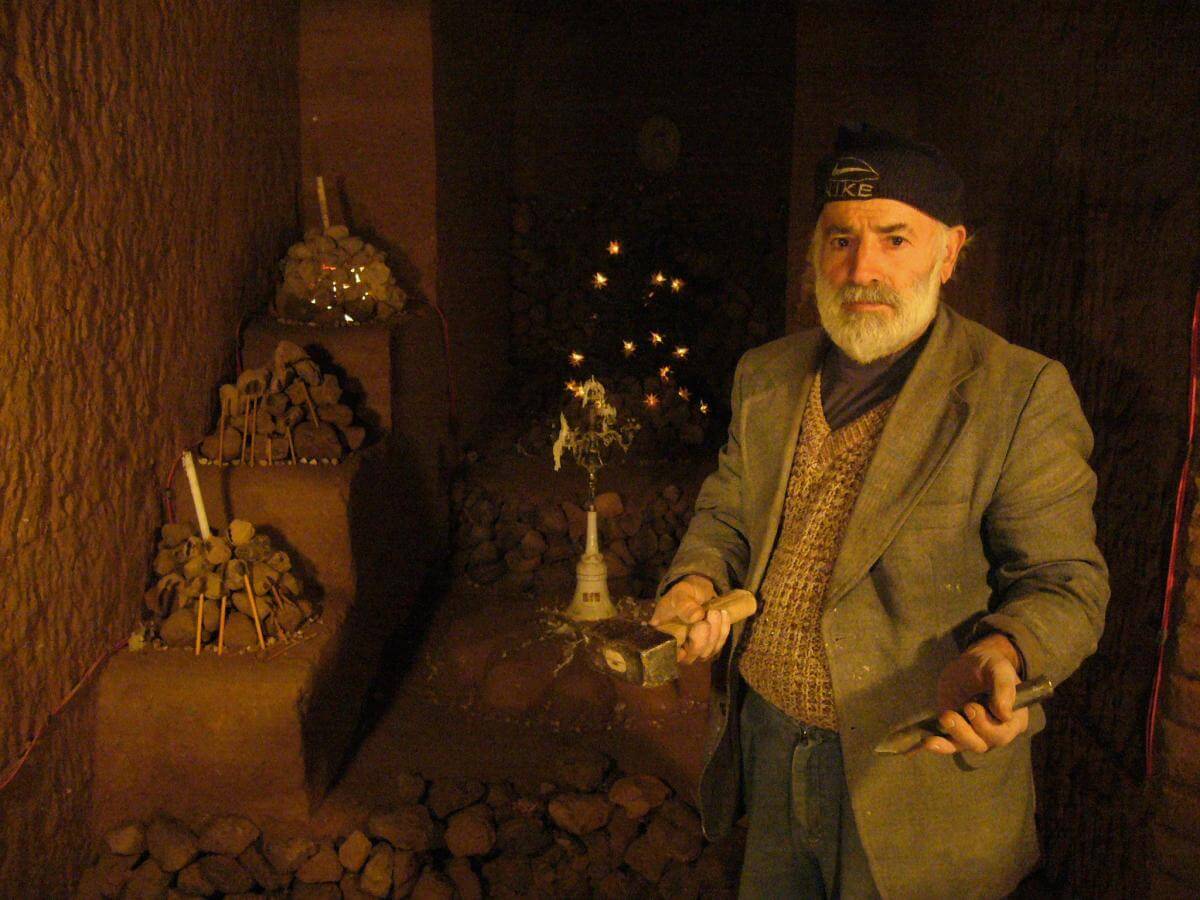 Levon told that he was visited by a phantom who gave a vision of a temple he should create. So, the man followed these signs and dig the cellar beneath his home. It was very hard work because the rocks were very solid and in his place, everybody would give it up. Everybody but Levon.

For digging the cave he used only hand tools and worked 18 hours daily with a little rest. Like many other people you may also think that there was no meaning or he had mental problems but Levon just had a mission.

Levon’s Divine Underground consists of seven floors beneath Levon’s home. It includes separate rooms and halls. There are interesting carvings on the walls. All of these carvings are in dark orange color. These decorations make the cave even more attractive. 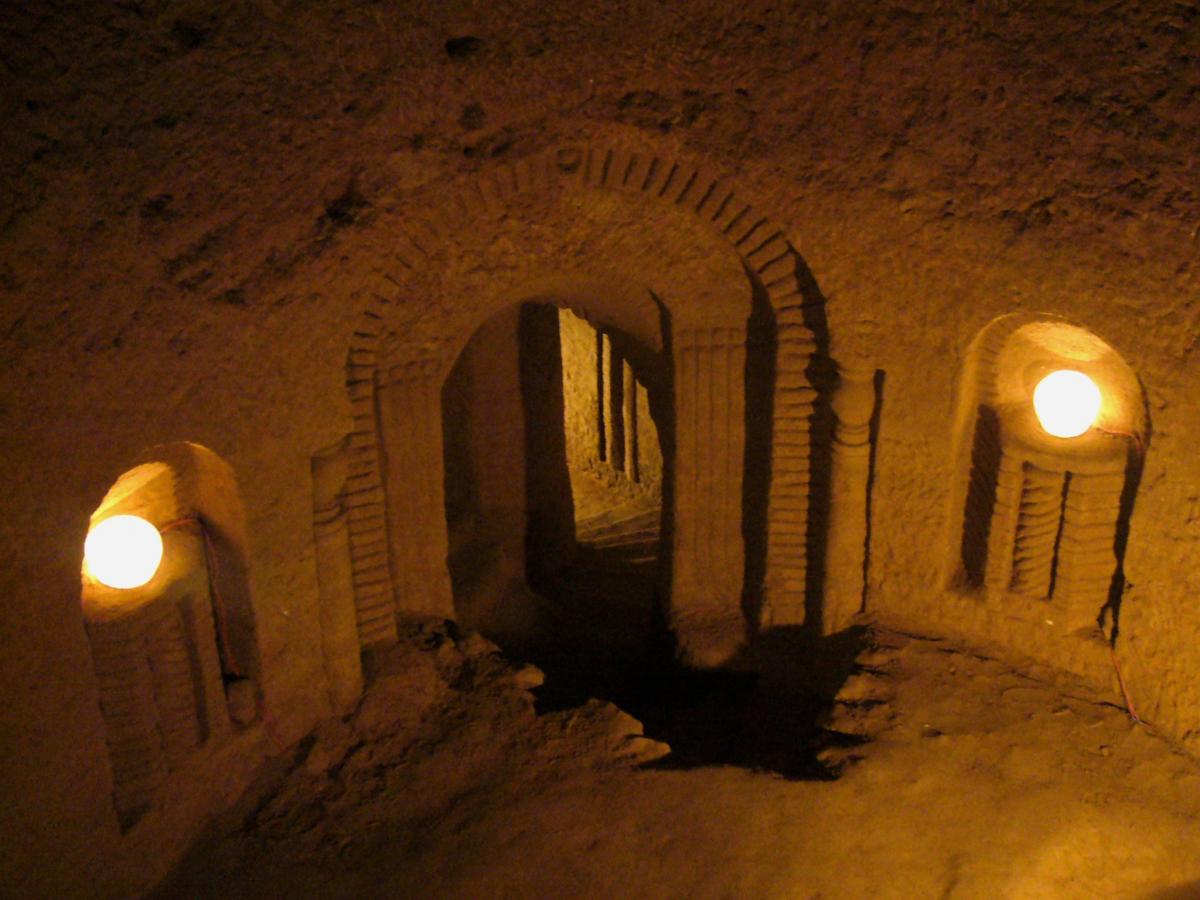 This cave is a kind of labyrinth. That’s why the housewife never leave the guests alone in the cave so that they don’t get lost. However, there are also some signs on the walls that show the exit direction. Levon installed some lamps as well on the walls because this is an underground building and you cannot meet the sunlight there. There are also very interesting candle holders carved on the rock.

This hidden cave is 21 meters deep and occupies a territory of 300 square meters. Levon’s Divine Underground is the exact reflection of Levon’s dreams and visions in reality. The most mystic thing related to this cave is that Levon died the day after he completed the cave of his vision.

When Levon was digging the cave his neighbors used to say that he was wasting his time instead of working to earn an income. However, today Levon’s Divine Underground has become a place of interest for thousands of visitors. And although there is no entrance fee in this cave the visitors leave as much money as they want. 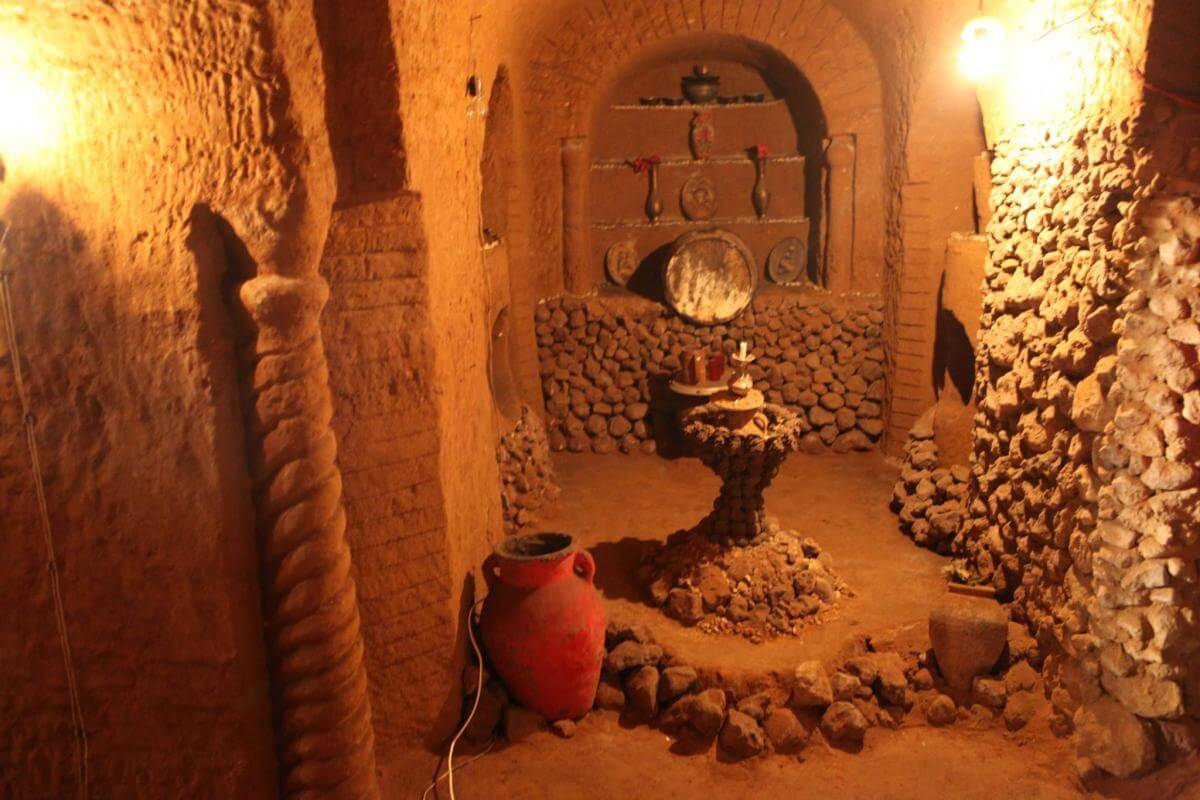 Due to this money, his family earns a daily living. It seems Levon didn’t earn money during his lifetime. Instead, he does after his death. Visiting this cave you will have a great experience. It will be a wild cave tour out of reality. In the mouth of the cave, on the one side of the wall, you’ll meet a painting of Master Levon holding a hammer and a chisel, on the other hand, his wife holding a potato. The cave has a huge steel door. 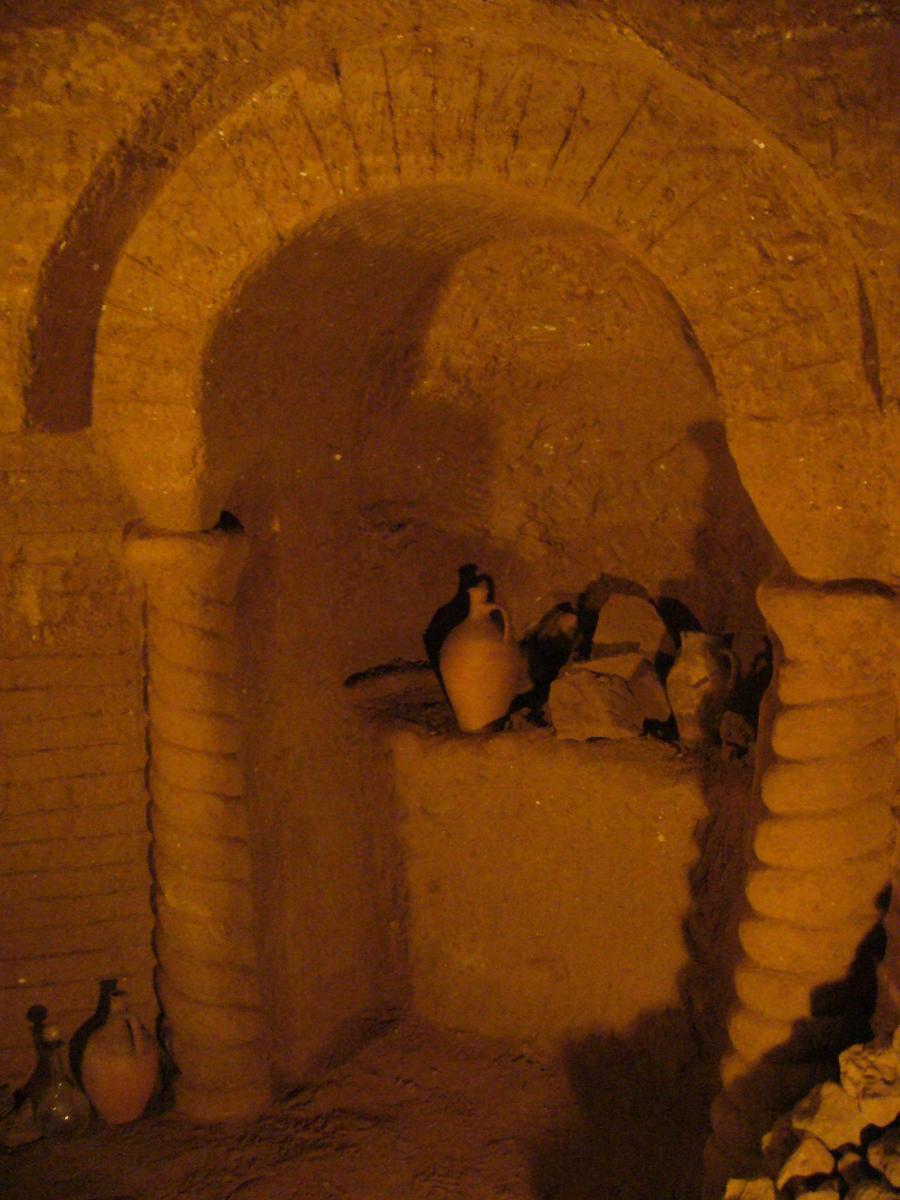 When you enter the cave museum you should go downstairs through the 80 stairs. The first room you arrive in is an oratory decorated with sculptures and candles. People say that visitors should enter this separately and make a wish before lighting the candle. Levon said that once you make a wish in the cave it comes true.

Currently, the cave museum is run by the wife of the master - Tosya. She placed all the items of her husband in the museum. Here you may see the clothes, tools, pictures, artifacts, and many other items of Levon. You may also ask Tosya to show you the mosaic portrait his husband created around the walls of their house. 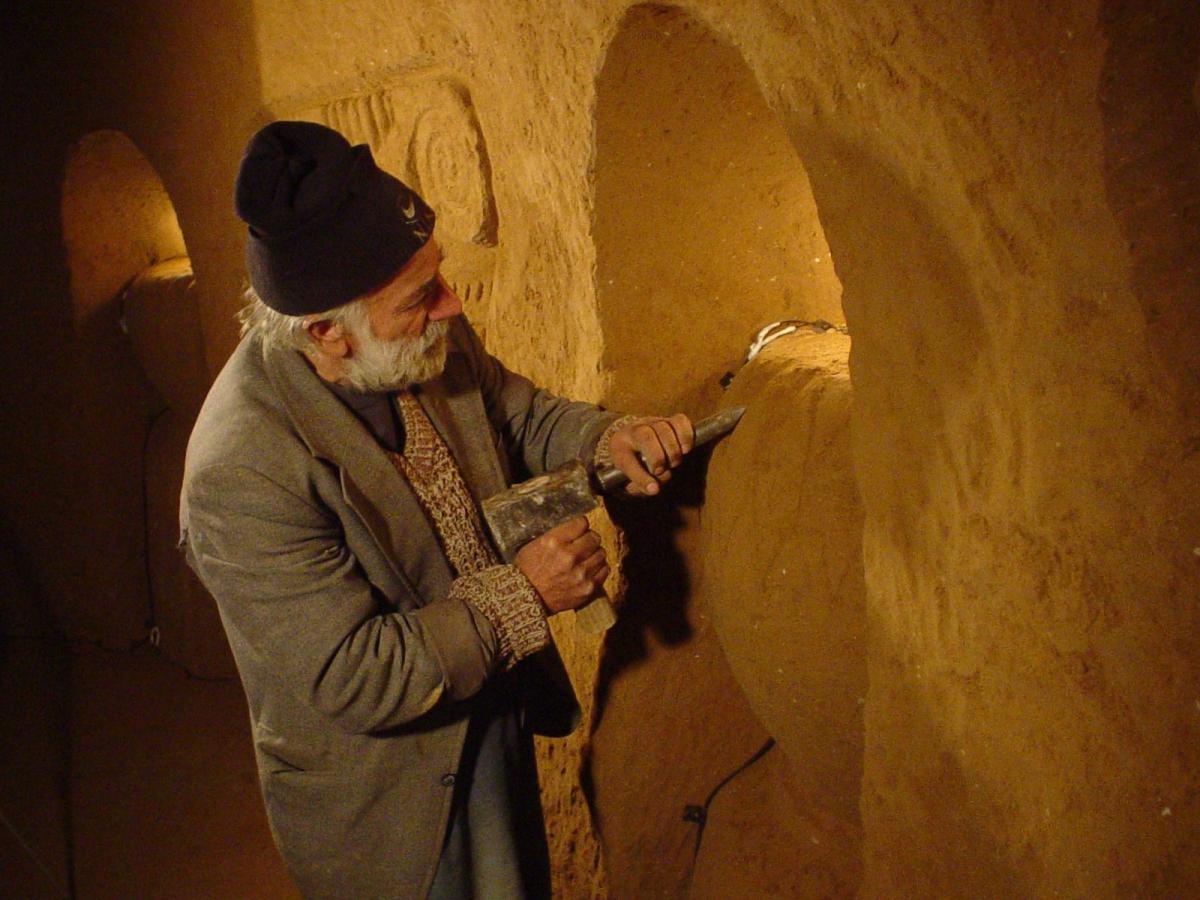 People appreciate Levon’s art after his death. He was awarded the title of an Honoured Cave Explorer by an institution related to cave studies in Armenia. When you walk around you cannot believe that only one person is able to create such a huge cave. However, Levon wasn’t alone. He was accompanied by a spirit that gave him motivation. Master Levon left a huge legacy. He deserves that we make a visit and investigate his great work.